The Ball Mountain Fire is estimated to be 25 acres this morning. The fire is burning in pinyon and brush.

The fire is located near Ball Mountain, north of Kennedy Meadows and west of Tunawee Canyon. The fire is highly visible from Highway 395 near Olancha, the Coso Junction area, and Kennedy Meadows.
The fire is burning in a remote area in the South Sierra Wilderness and there is currently no threat to life or property. Smokejumpers, the Inyo Hotshots, and Inyo Engine 41 crew are being inserted today to begin fireline construction. Additionally, a Type 1 helicopter, a Type 2 helicopter, and air attack are committed to the fire.
The crews’ focus will be on the southeast flank of the fire to secure an anchor point and to prevent the fire’s spread into Long Canyon.  Crews will take advantage of natural barriers (rock) and previous fires (including the 2008 Clover Fire) for line construction to contain the fire to the north and west.
This is a lightning-caused fire from the storm that passed through the area on Saturday. 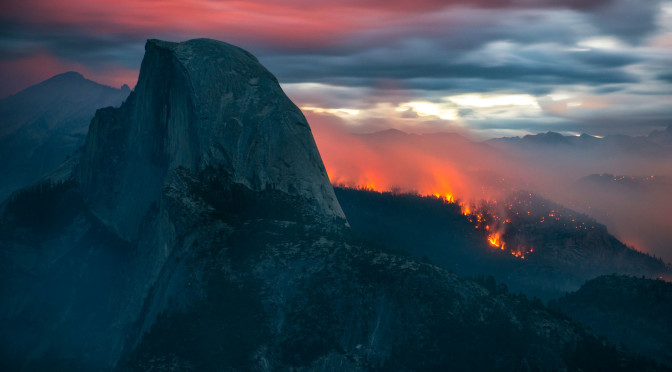 #MeadowFire in Yosemite National Park increases in acreage, but also in containment.

The Half Dome Cables in Yosemite National Park will reopen to the public on Saturday, September 13, 2014.  The cables have been closed since Sunday night, September 7, due to a wildfire.  The Meadow Fire, located east of Half Dome and near Little Yosemite Valley, is currently at 4,906 acres and is 23% contained.
Yosemite National Park is continuing active suppression efforts on the fire.  Over 550 fire personnel are assigned to the fire, including fire crews from the National Park Service and the U. S. Forest Service.  Additionally, there are sevenaircraft dedicated to suppressing the fire.
The trail to Half Dome via Little Yosemite Valley is open to day-use only.  No overnight camping in any areas impacted by the fire is permitted.  All other area closures, including Little Yosemite Valley, Sunrise High Sierra Camp area, Echo Valley, and Clouds Rest, are still in effect.
Visible smoke in the early morning hours may be present in and around Yosemite Valley and the Half Dome Hike.  Visitors who are sensitive to smoke should consider rescheduling their hike to Half Dome or their visit to Yosemite National Park.  Visitors are urged to check the park’s website to get updated information on the smoke impacts to the park.  Updated information can be found at www.nps.gov/yose or http://www.nps.gov/yose/blogs/fireinfo.htm.
-NPS-
Stay informed on Twitter, too.

Our own Inyo Hotshots are among the USFS firefighters assigned to the #MeadowFire in Yosemite.