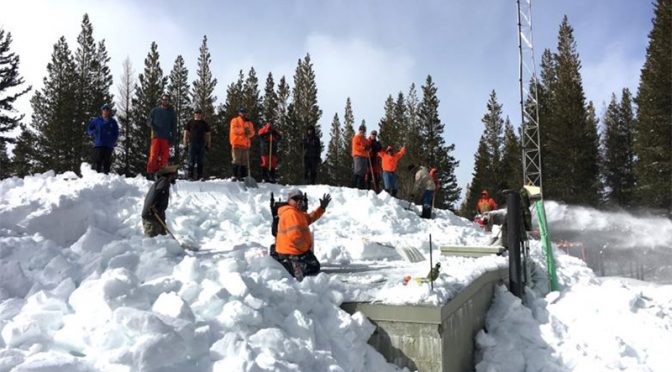 According to Betty Hylton at MCWD, last week, after continuous monitoring of the snow load on the water treatment plant, all available District personnel were requested to assist in removing snow from the Lake Mary Treatment Plant roof. The effort continued an additional three days with help from the California Conservation Corps (CCC) and an industrial-sized snow blower from Mammoth Mountain Ski Area (MMSA).
“The building survived the winter of 1983, and was not showing major signs of stress; however, the District likes to be proactive rather than reactive. The Lake Mary Treatment Plant is nearly 40 years old and has a flat roof. There was 8 feet of visible snow on the edges and even more in the center,” said Nick Holt, District Assistant Engineer. Any interruptions in surface water treatment because of snow damage would be unfortunate while ample surface water is available for use and while our aquifer could still benefit from the opportunity to recharge.
The effort and resources required to lighten the snow load were significant. Twenty-four people helped in the removal effort, 12 from the District and 12 from the CCC. “We utilized two of our snow blowers, plus a larger blower borrowed from Mammoth Mountain Ski Area to help remove snow,” said Rob Motley, District Plant Maintenance and Electrical Supervisor, who was on the roof all four days and initiated the shoveling efforts. “To transport people to shovel, it took three snowmobiles and a snow cat which made over 26 trips,” Motley added.
The District relies on surface and groundwater resources to meet Mammoth Lakes’ potable water demand. Although surface water is expected to be abundant, use can be limited by infrastructure capacities and legal restrictions. The District Board of Directors will be evaluating whether the groundwater aquifer recharge is sufficient to decrease current water restrictions during the April 20th Board meeting.