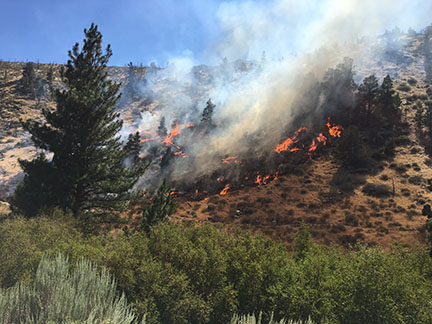 The Clark Fire and the Rock Creek Fire heat up the local hills.

As of 9am Saturday morning the Clark Fire has burned over 2,800 acres and is at 50% containment.  The fire is located East of Highway 395 near Bald Mountain.  The fire was started by lightning on August 4th.
Crews today will prep Forest Service roads to secure the fire perimeter along the North and East flanks of the fire.  The flank is the most active, driven by winds.  The fire was less active last night except along the NorthEast flank.
Clark Canyon has been evacuated.  Visitors are advised to avoid all roads that lead to Bald Mountain for the safety of themselves and firefighters.
There are a total of 254 personnel assigned to the incident.
As of 9am Saturday morning the Rock Creek Fire is estimated to have burned 185 acres and is at 5% containment.  Down canyon winds last night pushed the fire South past containment lines towards Swall Meadows.  The Fire Response today will focus on securing the Southern flank of the fire and then using that as an anchor to secure the open fireline.  The fire is burning in brush, cheat grass, pinyon pine, and juniper.  Steady winds and fine fuels from the cheat grass are allowing the fire to grow rapidly.
Parts of Swall Meadows have been evacuated and remaining residents are under an evacuation advisory.  4 crews, 15 engines, 2 air tankers, 2 helicopters, 1 bulldozer, and 3 water tenders are assigned to the incident.
Lower Rock Creek Road is closed between Swall Meadows and Highway 395.  The fire is under investigation but it appears to be human caused.
Low relative humidity and afternoon winds are a major concern for both fires. 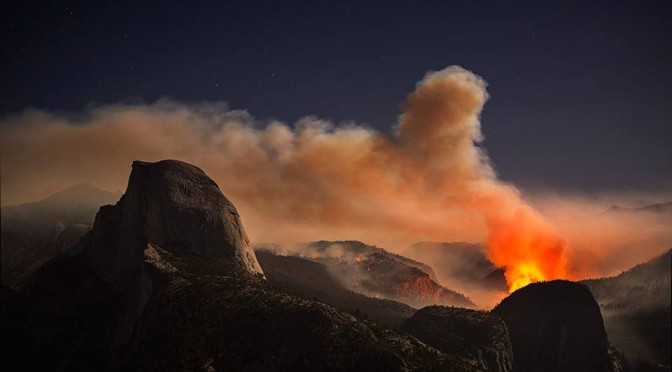 The Inyo National Forest is expanding fire restrictions to include wilderness areas of the Inyo National Forest.  Beginning today (Friday July 29th) the following restrictions will be in effect.
No campfires, briquette barbeques, or stove fires are allowed outside of designated developed recreation sites and specifically posted campsites or areas.  A list of designated campgrounds and recreation sites is available at visitor centers.  Persons with a valid California campfire permit (available free of charge at visitors centers) are not exempt from the prohibitions but are allowed to use portable stoves or lanterns using gas, jellied petroleum, or pressurized liquid fuel.
It is also prohibited to possess or discharge any fireworks including “safe and sane” fireworks.
Also, no smoking is allowed except within an enclosed vehicle or building, a developed recreation site, or while stopped in an area at least three feet in diameter that is barren or cleared of all flammable material.
Resorts, pack stations, recreation residences and other sites operated under a special use permit from the U.S. forest service may be exempt from the special orders, as long as any fire activity is conducted in compliance with their permit.

Although they are not out of the woods yet the areas surrounding Lee Vining are beginning to see the light at the end of the Marina Fire tunnel.  Acreage burned has remained at 654 acres since late sunday night and the fire is now 75 percent contained.  However, thunderstorms in the area could produce dry lightning and outflow winds up to 50 miles per hour.  This has firefighters worried because of the increased potential for new fires to flare up and spread rapidly.

As the containment line continues to increase unnecessary firefighting resources will be released accordingly.  This demobilization process will allow equipment and personnel to return to their home units or reassigned to other fires.

The investigation to determine the exact cause and origin of the fire is ongoing. 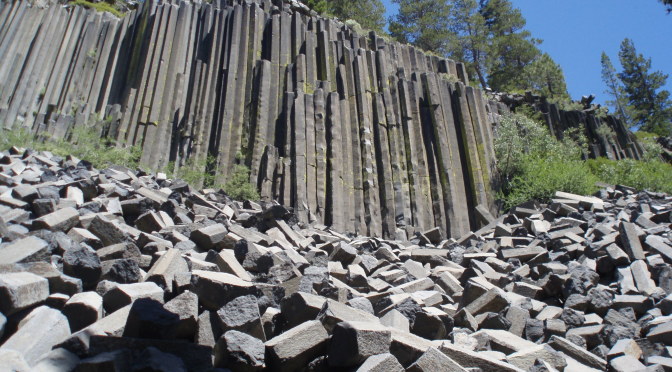 The pile burning at Red’s Meadow has been postponed. Crews are looking for more snow coverage in the area and will re-evaluate after the storm passes. Crews are going to shift their attention to the Sawmill Piles along Highway 203 and the Scenic Loop above Mammoth Lakes (near Wooley’s Play Area and then leading east and down the Scenic Loop Road). This project will start Wednesday, December 10th, weather and air quality conditions permitting.

Fire crews will start ignitions on the Reds Meadow piles, weather and air quality conditions permitting. Forty-one acres are planned for today (Tuesday, December 9th)  and additional units may be completed in the next few days before the forecast storm. Expect smoke visible from Mammoth Lakes, Mammoth Mountain, and Devils Postpile.  According to officials at the Inyo National Forest, this continues the ongoing and substantial work to reduce fuel loads and restore natural habitat in the wake of the Reds Meadow wind event that caused extensive tree blow down.

The U.S. Forest Service today announced that in anticipation of releasing a Notice of Intent (NOI) at the end of this month, it is scheduling a public meeting in Bishop CA:
§  6:00-8:00pm – Thursday, September 18, Tri-County Fairgrounds, Sierra Street & Fair Drive, Bishop, CA.
Meetings are also scheduled for the Sierra and Sequoia National Forests.
The NOI will advise the public of the Forest Service’s intent to prepare and develop an environmental impact statement (EIS) that, when completed, will revise forest plans for the Inyo, Sequoia and Sierra National Forests.  The NOI will also have information on the purpose and need for this action along with the agency’s proposed action.  The final EIS will result in three separate Records of Decision and three separate forest plans.  Forest Supervisors will remain the “responsible official” for making decisions on their specific forest plans.
The Sierra, Sequoia and Inyo are three of eight national forests that were selected as “early adopters,” meaning they will be the first forests to revise their land management plans using the new National Forest System Planning Rule, which was completed in 2012.  The planning rule provides the framework for Forest Service land management plans across the nation.
Next month’s public meetings are part of the “scoping period” which gives the public a chance to tell the Forest Service what issues and concerns they think should be addressed in the EIS before the Forest Service begins drafting the document, and to provide written public comment regarding the NOI’s purpose and need, and its proposed action.
For more information regarding forest plan revisions, visit the Pacific Southwest Region’s planning website at:www.fs.usda.gov/main/r5/landmanagement/planning.
For Inyo National Forest specific information, please contact Deb Schweizer at 760-873-2427 or debraaschweizer@fs.fed.us
AMERICANS WITH DISABILITIES:  In compliance with the Americans with Disabilities Act, if special assistance to participate in this meeting is needed, please contact the appropriate National Forest. Notification at least 48 hours prior to the meeting will enable the Forest Service to make reasonable arrangements.
# # #