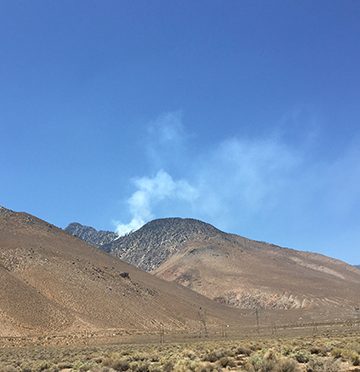 The Ash Fire, a lightning-caused fire, was ignited and detected on June 12th. It is approximately two acres in size and is burning in the Golden Trout Wilderness southeast of Mulkey Meadows.

Smoke may be visible along the Highway 395 corridor north of Olancha. Please do not report this fire.

There is currently no threat to life or property. The fire is burning is a mixture of mahogany, pinyon pine, and Jeffrey pine at 8,500 ft. The fire is burning in steep, rugged, and inaccessible terrain. Fire spread is primarily from rollouts; burning material that gets loosened, rolls down the steep slope, and ignites vegetation below.

Fire crews are monitoring the fire and using bucket drops from helicopter to help direct and slow the fire spread. The fire behavior is low intensity, burning the sparse dead and down vegetation in the area. Crews plan to use a confine/contain strategy to slow the fire’s spread towards Wormhole Canyon.

More than 300 lightning strikes occurred in the southern district of the forest. Crews will also continue to monitor the area for sleeper fires, which may have ignited during the storm, but will begin to show smoke as conditions get warmer and drier.