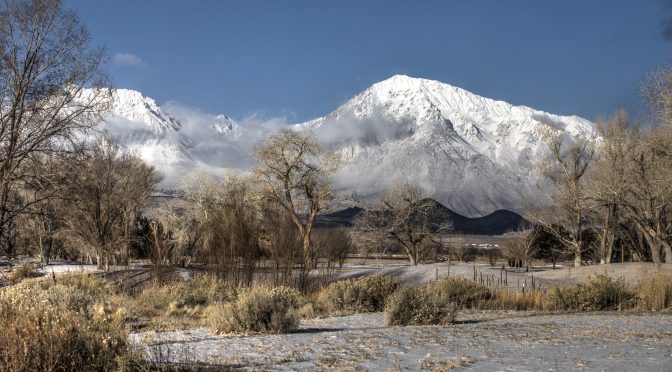 During the lecture, Smallcomb said that the a dry January and February followed by a precipitous March, helped provide optimal conditions for a scorched summer, because vegetation dried out later than usual. The Reno NWS representative also told attendees that July and August were the warmest months ever recorded in the Eastern Sierra, and that led to optimal conditions for fires.

ARkstorms were additionally discussed. An ARkstorm is a super-storm that brings copious amounts of water to a region causing severe flooding. To compare the effects of an ARkstorm verses a normal storm, Smallcomb said that the the entirety of effects of the 2016-2017 winter season in the Eastern Sierra would take place in just 22 days.

Smallcomb said that with the effects of climate change, there are studies and models which indicate there is a good possibility of an ARkstorm occurring in the next 40 years.

Other topics at the briefing include steps that the NWS are taking to increase radar coverage in the areas of Tonopah and Bishop by lowering the altitude on radar. This measure would possibly allow for increased range of radar and in turn, provide South Central Nevada and the Owens Valley with more accurate weather predictions.

The meeting then opened for discussion between citizens and the National Weather Service. One attendee brought up the issue of altitude weather predictions, saying that although weather forecasts are accurate at lower elevations, they often fail to foretell temperatures and wind in the higher areas of mountainous regions, which can leave hikers and campers unprepared for the shifting climate.