The Lone Pine Volleyball program is holding a fundraising spaghetti dinner on Thursday, January 14th.  The meal will include spaghetti, garlic bread and green salad.  Dinner will be served at the Lone Pine VFW post at 481 south main street.  The fundraiser will run from 4pm to 6:30pm with take out available.

3 of 4 local teams fall in Tuesday’s Opening round

Bishop Union, Mammoth, Lone Pine, and Big Pine volleyball all opened play Tuesday in their respective playoff brackets, only Mammoth survives to play in round two.  All three losing teams hit the road Tuesday while Mammoth used their home court advantage advancing to Thursdays second round.

Coach John Morris reports that the Huskies defeated St. Bernard 25-6, 25-9, 25-19 and advance to the 2nd round of the CIF Southern Section 4A tournament on Thursday.   Mammoth is awaiting the winner of Katella and Ramona Convent.

The Broncos fell in five games to Taft high school Tuesday.  Coach Linda Frigerio’s comments, “Going in ranked #9, we were prepared to battle the #8 ranked Wildcats.  Based on playing them in playoffs round 2 last year, we knew we again would be neck and neck and would have to have to play their best to have a chance at victory. After 5 grueling games with scores of 19-25, 25-23,27-29,9-5 Taft came up on top and we wrapped up our season going down swinging. I am incredibly proud of every single girl on this volleyball team for a season that exceeded my expectations.  I believed going in to the season that we would be rebuilding because we are so young.  With only 2 seniors I anticipated the lack of experience would be a detriment.  Instead, they played hard, fought hard and  powered through every match, many of which went 5 games, and lost with character and won with dignity every time.”

Coach Mel Joseph’s 1st round report:
Lone Pine traveled to Panorama City on Tuesday to take on St. Genevieve in the First Round of the CIF SS 4-A girls volleyball playoffs.  The Lady Eagles ended their season falling in three games to the number 9 ranked Valiants 18-25, 13-25, 19-25. “ We played well, this team was definitely beatable, we just make some key errors at crucial times that allowed St. Genevieve to create separation.  Having competed in the tough DML against teams like Desert and Mammoth, the girls were well prepared for post season play.  Having competed all season long with only seven players, I am proud of what we accomplished, we met every goal that was set from making the Gold Bracket at the Cal City Tournament to qualifying for post season”.  Coach Joseph did bring up Jessianne Joiner, Celia Ray, and Juliann Jones from the DML Champion JV squad noting that all three had positive touches on the ball in this post season match.  Coach Joseph would like to thank all the fans for their support throughout this season including to 40 plus that made the trip south on Tuesday. Coach Joseph would also like to thank first year assistant and JV Coach Courtnie Hunter for her work this season. LPHS says farewell to six seniors (Niki Martinez, Abby Southey, Lena Cariou, Katelyn Button, Lacie Jones, and Katie Lacey) and wishes them good luck in their endeavors.  Coach Joseph looks forward to his 25th season as the Lady Eagles Skipper.

Boron, CA – Lone Pine traveled to Boron Tuesday and fell in a very competitive five game match.  Lone Pine won games 1 and 2 (25-20, 25-16) then dropped games 3 and 4 (22-25, 23-25) setting up the tie breaker losing 11-15.  “We jumped all over the Lady Cats in the first two games and just could not finish in games three and four”.  “Boron is always a tough place to play, our game plan worked, it was just some key errors that got us; again, I was proud of our cohesive effort”.  Lone Pine is now 6-6 in the DML, and currently in 4th place, clinging to the final playoff spot out of the tough DML.  The Lady Eagles will now host the #2 ranked Desert Scorpions on Thursday (JV will start at 3:00PM) then finish out the regular season on Friday hosting Silver Valley.  Coach Joseph will honor his six seniors on Friday against the Trojans.  JV begins at 4:00PM

Coach Mel Joseph’s report:
Action, CA – Lone Pine traveled to Action on Tuesday and fell in four games to the Mustangs. Vasquez won game one 25-11, Lone Pine won game two 25-18. Then in game three with the score 6-3, Lone Pine’s senior middle blocker Katie Lacey came down on a Vasquez player at the net injuring her ankle and have to leave the match. Playing with seven players, one of whom is a Libero, the Lady Eagles had to finish game three with only five players having to take a side out (and a point earned for Vasquez) each time Lone Pine rotated to Lacey’s service rotation. Lone Pine lost game three 25-14. Game 4 Lone Pine placed Libero Lacie Jones into a regular jersey and inserted her into the middle blocker position giving the Lady Eagles six players on the court. Lone Pine lost game four 25-20. With the loss, Lone Pine is now 6-4 in DML, 10-10-2 overall.

“Given the emotional concern for their teammate who left the gym for an area hospital, I was proud of how the girls stuck together and battled through to the end, this says a lot for our maturity and camaraderie”.

The Lone Pine High School volleyball team moves to 5-3 in the Desert Mountain League with a straight games win over Mojave.   Lone Pine Coach Mel Joseph indicates the Golden Eagles  hosted Mojave (Varsity Only) Tuesday defeating the Mustangs in three straight 25-8, 25-7, 25-9.   With the victory, Lone Pine moves to 5-3 DML, 9-9-2 overall. The Lady Eagles will now pack for four straight road matches beginning with a trip to Lancaster on Thursday to take on the Desert Christian Knights.

Freshman Sydney Frigerio led the offense with 23 attacks and 6 kills, but freshmen Sofia Baiano and Jade Whiteside stood out with 5 kills each.  Sophomores Kassidie Duckey, and Lexie Sigler, and Rebeka Riesen led the team in serving.  Each had no errors in over 10 serves.  Lee Vining had difficulties returning the Broncos’ serves, and Bishop scored a total of 18 aces in the 3 sets.  Overall, 95% of the Broncos serves were successful.

Mojave-The Lone Pine Lady Eagle volleyball team traveled to Mojave on Tuesday for their Desert Mountain League opener and disposed of the Lady Stangs in three straight 25-5, 25-3, 25-5. “Mojave has a very young team and not having a Middle School program or a JV team does not afford their incoming players the experience necessary for HS competition”. “I give them (Mojave players and coaches) credit for being good sports and hosts”. “A lot of times playing an inexperienced opponent, the level of play can drop on both sides of the net, I was pleased with our performance as Lone Pine stayed focused and took care of the ball on their side”. Lone Pine will next host the Desert Christian Knights from Lancaster on Saturday with JV action starting at 1:00PM.

Both Bishop and Lone Pine will play this weekend at the Mammoth Tournament.

Coaches Comments
Bishop Coach Linda Frigerio
“Carly Todd led the team in kills with 44% of her 16 attacks scoring for the Broncos, followed by Rebeka Riesen and Little Eva Lent.  Serving by the Broncos was outstanding.  Sydney Frigerio started the second game with 9 unanswered serves including 3 aces.  Ashley Worley capped the game with 5 straight points.  Overall, half of Ashey’s 12 serves in the match were aces, giving her the highest serving percentage.  As a team, the Broncos achieved a 95% success rate with their serves.”

Lone Pine Coach Mel Joseph
“Bishop kept us back on our heels the entire match with their aggressive serving and attacking. We did not bring the right attitude to compete.  The only real highlight for us came in game three when we won a very long rally, had we played the entire match that way the outcome may have been different. This was a great preseason experience, one to build on as we head to the Mammoth Invitational this weekend”. 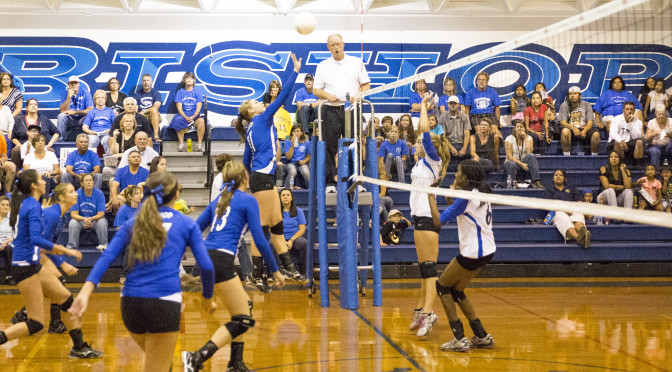 A battle of the Owens Valley’s top volleyball teams is set for this afternoon.  Bishop Union will host Lone Pine at Gus Klekas gymnasium.  JV action will begin at 4pm, with the Varsity dual to follow.  Long time Lone Pine Head Coach Mel Joseph leads the Golden Eagles into a battle with Coach Linda Frigerio’s Broncos.

After Today’s (Wednesday, Sept 9th) clash both Bishop Union and Lone Pine will compete in the Mammoth Tournament this Friday and Saturday.

At the Varsity level Lone Pine won in four games, dropping game one 25-22, then reeling off three straight wins 25-21, 25-23, and 25-18.  Coach Mel Joseph’s comments, “After two weeks of intense practice it was nice to get on the court and play (against a worthy opponent), we played well at times and not so well at other times. As this team gains confidence and experience we will challenge any opponent we face.” As a team Lone Pine served 91% with 14 aces and hammered 32 kills. “Using this opening match as a stepping stone, we now know where the weaknesses lie and the area(s) of fundamentals that still need attention. As a coach I was very happy with the team attitude and their effort to battle”. 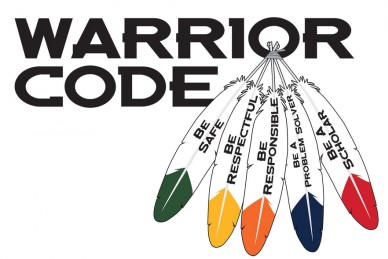 Lone Pine Volleyball will being practice on Monday, August 17th at 5:30 am.  The Golden Eagles are under the guidance of long time coach Mel Joseph.  Coach Joseph reminds all student athletes that you must have your sports physical exam completed prior to practice.  In addition to starting practice on Monday the 17th, the Golden Eagles will host a fundraising Indian Taco Sale on Saturday, August 29th.  The event will be held from 11am to 4pm at the Lone Pine VFW at 481 south main street.  Indian Tacos can be ordered by contacting coach Joseph at 760-382-0406.  Delivery will be available.