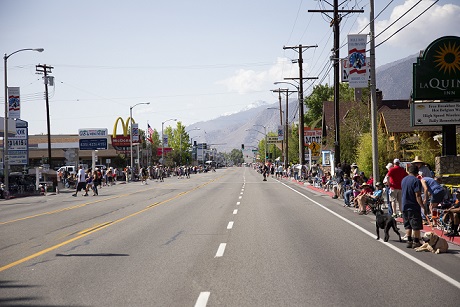 Advanced Asphalt of Truckee served as the construction contractor, and the main subcontractor was V and C Construction from Minden.  The effort was designed by Triad Holmes Associates of Bishop.

City Council Members Laura Smith, Joe Pecsi and Karen Schwartz spoke at the ribbon cutting.  Mayor Pro-tem Smith encourages folks to shop local in support of the businesses that were inconvenienced during construction.  Councilman Pecsi thanked the focus group for their effort and commitment.  Councilwoman Schwartz thanked the focus group and praised the projects pedestrian friendly features.  Bishop Chamber of commerce and visitors bureau Executive Director Tawni Thomson praised Grah and city staff for reaching out to the community for input.

According to Dave Grah, this first phase of the Warren Street project improved North Warren Street and part of South Warren Street with new pavement, curb,sidewalk, street trees, street lights, pocket parks, seating areas, platforms for performances, and colored concrete with designs. The blocks of Church, Academy, and Pine streets between Warren and Main were also improved as part of the project. Other features such as sculpture, banners, archways, bike racks, and a public restroom are also planned. In addition to addressing serious pavement deterioration, poor sidewalks, and drainage issues, the project was intended to make the area more attractive to pedestrians to stroll, stop, shop, eat, and to see a show. Future phases of the project in the next several years are planned to extend improvements to the full length of the street.