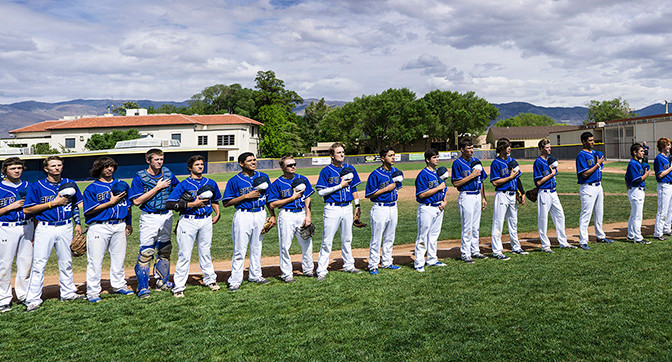 The Broncos closed out a busy week with a 8-5 road win at Frazier Mt. Friday.  The three game week included two wins over Frazier (Tuesday and Friday) and a heartbreaking 5-4 loss to Rosamond Thursday.  The Broncos bounced back from the Rosamond loss with a quality road win.  Aaron Chinzi pitched 5 innings striking out 10 earning the win.  Sophomore Kade Wagoner took to the hill in the 6th inning facing the top of the Falcon line up.  Kade made his first varsity HDL appearance in a 7-5 game, on the road, in a key game.  Wagoner kept Frazier of balance with a heavy dose of curve-balls.   The crafty lefty held Frazier scoreless in the 6th and 7th staying in the game after taking a nasty come-backer off the left leg.  Wagoner earning the save in a game that goes a long way in boosting the Broncos post season resume.

Offensively the broncos Brodie Maloney, Patrick Mitton and Aaron Chinzi all doubled in a 3-run first inning.  Clyde McCoy added a clutch two out single driving in 2 key insurance runs late in the game.  McCoy’s single following base hits by Justin Hollowell and Peyton Wagoner.  Patrick Mitton delivered an infield single in the top of the 7th inning driving in the Colton Riesen, the 8th bronco run.

Key defensive plays Friday included a great running catch in center field by senior Justin Hollowell and a seventh inning double play started by senior Jake Traynor.  Jake snagged a line drive at third base and fired a strike across the diamond to double off a falcon at first base.

Bishop now closes out the regular season with a home and away series with hated rival Kern Valley.  Tuesday game is at home, 3:15pm first pitch.  Tuesday is senior day at the ball park as the broncos will honor their departing seniors.  Thursday Bishop Union will travel to KV wrapping up the regular season.  Bishop (6-4) is currently in third place in the High Desert League standings trailing Rosamond (9-1) and Kern Valley (8-2).

All Bronco varsity baseball games are broadcast live on AM 1230 KBOV in the greater Bishop area, and steamed live here at kibskbov.com to the know world.  Tell your friends.

Bishop high school volleyball traveled to rival Kern Valley this past Tuesday (October 14th) earning a split in two games.
The varsity fell to KV in straight games with the JV winning in two.
The varsity fell to KV 25-17, 25-18 and 25-15. The loss evens the Bronco High Desert League record to 2-2 at the midway point of league play.
All teams are chasing 4-0 Frazier Mt. with Kern Valley ahead of the Broncos in the standings at 3-1.
California City is 1-3 and Rosamond is 0-4 in HDL play. Individual statistics for the Broncos include Sammy Powell with 5 kills and 2 aces, Cierra Rossi, Kiara Cox, and Carly Todd each had 4 kills. Staci Sonke delivered 3 aces and 16 assists and Gabi Cortez chipped in with 18 digs.
The Bronco JV did their part to spoil homecoming at KV with a straight games win, 25-18 and 26-24. Rebekah Riesen had 2 aces, 2 kills. Edi Lou Arrowood had 2 aces, Haley Hersley served up 3 aces and 2 kills. Both Ashley Worley and Topah Scherer had 4 kills.
The Broncos start the second half to High Desert League play Thursday, October 16th hosting Rosamond. JV starts at 4pm with the varsity game to follow.