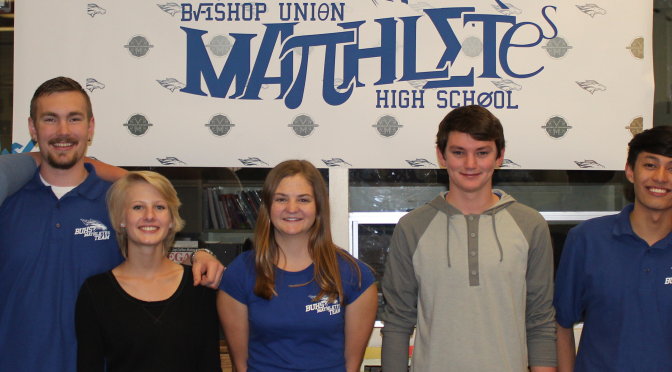 After an eight month season that began in September and ended in April, the BUHS Varsity Mathletes finished their last meet of the year on April 29 and ended the year with a strong second place finish in a ten member league. Tehachapi won the league, followed by Bishop, and third place went to Rosamond.

Bishop’s individual Varsity team members also garnered honors, with four members earning total scores that placed them in the top 15 out of the 81 students who competed. Junior Jamie Shultz earned an individual fourth place finish, seniors Olivia Grah and Colton Riesen tied for 12th place, and junior David Chavez came in 15th. The Mathletes are coached by BUHS math teacher Mrs. DeeDee Buchholz who said, “This is a great group of kids. They work hard and try their best, and I am very proud of the overall team scores. Both Varsity and JV earned second place overall in the league. While doing an outstanding job academically, this team showed great character all season long. It is a ture pleasure to coach them.” The Mathletes Award Ceremony is on Tuesday, May 19 at 5:30 in the BUHS Auditorium.