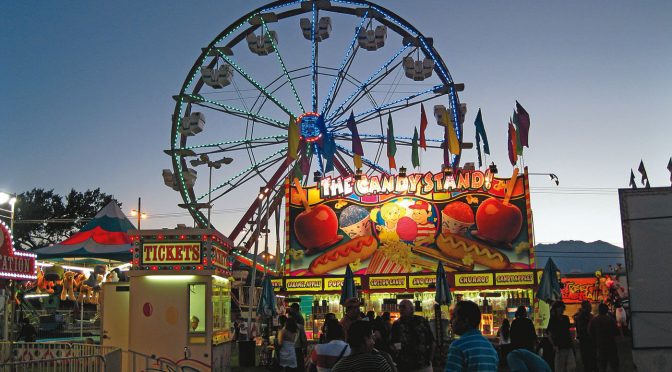 The 2020 Tri-County Fair has been cancelled due to the COVID-19 Pandemic.

CEO, Jen McGuire discussed how the Inyo County Public Health Department believed it would not be best to host the fair this year due to the State of California not allowing any mass gatherings.

McGurie also says that she has tried to find a solution when it comes to hosting the fair, but it was just not possible.

“We have tried different ideas, and I have laid awake each night to see if we can do a virtual fair, or an open market, or anything possible to try and make work. Unfortunately it is just not going to happen with our numbers continuing to rise, and  COVID numbers will continue to rise for the next two to three weeks. I have to tell you cancelling fair was something that we kind of all knew was coming, but it is just sad that it actually is happening. We have tried everything we possibly could to make it happen,” McGuire said.

Chalfant resident added to Fair Board

McKinzey’s experience includes working as an administrative analyst at Inyo County Health and Human Services since 2014.  She has also served as a staff service analyst at Inyo County Child Support Services from 2012 to 2014, an account technician at Inyo County Public Health Department from 2011 to 2012 and was a bookkeeper at Benefit Management Inc. from 2006 to 2010.  McKinzey is treasurer at the Bishop Little League Board. This position does not require Senate confirmation and is no compensation. The Governors office notes that McKinzey is a Democrat.

A regular meeting of the Eastern Sierra Tri-County Fair board is set for Thursday, November 5th in the boardroom of the main office at the Bishop Fairgrounds.  The meeting of the 18th district agricultural association (fair board) will begin at 1pm.

Thursdays agenda includes the staff managers report from Suzanne Wolfsberger-Gruwell.  Suzanne will cover events that have been happening at the fairgrounds since the last board meeting and will provide the exhibit report.

Ben Barlow will deliver the maintenance report and an update on the main arena timing clock.

A executive session is scheduled to look at personnel matters including litigation with former CEO Sally Symons.  As the 2015 Tri-County fair was starting up, then CEO Sally Symons was asked to step down.  Symons worked as CEO from March of 2014  until Sunday, September 6th.  According to a statement from the California highway patrol….”In July of 2015, the California Highway Patrol, Inland Division Investigative Services Unit, initiated an investigation into the possible embezzlement of funds from the Eastern Sierra Tri-County Fairgrounds.  During the extensive investigation, CHP investigators determined Bishop area resident Sally Ann Symons, 46, embezzled funds belonging to the Eastern Sierra Tri-County Fair.   On October 21, Symons was detained and transported to the Bishop Area CHP office for questioning.  The CHP report containing the embezzlement and other various charges will be submitted to the Inyo County District Attorney’s office for review.”
As of today (Tuesday, November 3rd) Inyo County District Attorney Tom Hardy confirms that his office is yet to receive the report.

This years fair had a theme of “Where Heritage and Culture Come Together”.   Among the featured contests were the Carne Asada cooking contest, Salas on the spot,  the Viva Margarita competition, and Pecan Pie baking contest.  Congratulations to all the winners.

1. Todd Lembke (aka The Mayor of Wilkerson)

Salas on the spot Contest

The Fair Board preps for 2015 Fair

The Board of Directors at the Eastern Sierra Tri-County Fair met recently and got the ball rolling for the 2015 edition of their flagship event, the Tri-County Fair. The winning slogan was submitted by Joshua Hinson and is “The Tri-County Fair, where Culture and Heritage come together.” Fair CEO Sally Symons commented, “There were over 50 entries this year, and it was a tough decision. Once again our community showed great support for this wonderful tradition.”

Other decisions about the annual end of summer celebration include the Pie Contest Flavor, which will be Pecan. And, for 2015 the Party Barn will become the “Fiesta Barn” with a Carne Asada BBQ contest, On The Spot Salsa contest (done “Chopped” style) and tortilla and fry bread contests. “With any luck we’ll have some margaritas, beer and live music too,” commented Symons.

Fair supporters and participants should look forward to other new contests and classes when the Exhibitors Handbook comes out in April. “We are hoping to change a few things up a bit and involve even more members of our three counties in the fun of entering exhibits at the Fair,” said Symons. “I’m confident that there is a lot of untapped creativity and talent out there that we would love to give a platform to at the fair while honoring our cultures and heritage this year.”