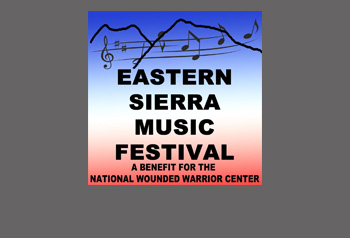 According to a press release from Barbara Laughon, there’s still time to get tickets for the 2017 Eastern Sierra Music Festival at 2016 prices.  Through the end of this month, ESMF organizers will honor the pre-sale prices announced at its Harvest Hoedown fundraiser last month.  After January 1st ticket prices will increase.  To see specific prices visit wwmusic fest.org.

Up and coming country vocalist Steve Moakler will open for Blues Traveler, with country duo Smithfield opening for Lonestar.  Local and regional bands will round out the two day event.

Sponsors and private donors for ESMF are also being Sought.  Please contact MC Hubbard at mc@wwmusicfest.org.

2017 marks the second year for the fledgling music festival.  ESMF benefits the National Wounded Warrior Center, set to be constructed in Mammoth Lakes, in addition to offering two days of non-stop music, vendors, on site RV camping and great camaraderie in the eastern sierra.

The event showcases live music from local talent set to appear at this summer’s Eastern Sierra Music Festival. Those performing at the barbecue include Halfway to Benton, What If, The Harry Andreas Band, 2nd Hand Smoke, and Steven Christie & The Pitchforks.

The barbecue’s menu includes a choice of tri-tip or barbecued turkey with all the fixings. Ranch bean master Duane Rossi will contribute his specialty, and a variety of salads plus homemade cobbler rounds out the meal.

In addition to the music, hay rides will be available, courtesy Lee and Jennifer Roeser.

Tickets are $25 for adults, $12.50 for kids under 12, and are available at Cobwebs, Diane Corsaro Insurance or VFW Post 8988. The festival’s website at WWMusicFest.org also offers barbecue tickets.

This summer’s Eastern Sierra Music Festival features country legends Dwight Yoakam and Larry Gatlin and The Gatlin Brothers, plus rising stars Brooke Eden and Old Southern Moonshine Revival. Tickets for the festival are on sale now and available at the festival’s website, WWMusicFest.org.

Eastern Sierra Music Festival extends its congratulations to Penny Bordokas of Mammoth Lakes for winning the festival’s recent drawing for a seven-day trip to Mexico.

Mrs. Bordokas was selected Sunday as the winner during a Valentine’s Day drawing at the Veterans of Foreign Wars Post 8988 in Bishop.

In the true pay-it-forward fashion surrounding this festival, Mrs. Bordokas told organizers she will not be taking the trip herself. Rather, she is donating the trip to Eastern Sierra Disabled Sports. It is her hope that Eastern Sierra Disabled Sports will hold a drawing among its hardworking staff and volunteers, and that the winner will be taking a well-earned break in the Mexican sunshine sometime soon.

Tickets for the July 22-23 Eastern Sierra Music Festival are on sale at the event’s website, WWMusicFest.org. As previously announced, country singer-songwriter Dwight Yoakam and the legendary Gatlin Brothers will headline the two-day event. Additional artists will include Old Southern Moonshine Revival and a host of local bands.

Proceeds from the festival will benefit the construction of the National Wounded Warrior Center in Mammoth Lakes.

Tickets for ESMF now on sale

Tickets for the July 22-­‐23 Eastern Sierra Music Festival are now on sale at the event’s website, WWMusicFest.org. As previously announced, county singer-­‐songwriter Dwight Yoakam and the legendary Gatlin Brothers will headline the two day-­‐event.

All ticket sales will be made via the festival’s website and its ticketing partner, Vendini.

Tickets sold cover both days of the festival and range in price from $80 for General Admission, to $95 for Reserved Grandstand seating. Two ticket packages are also available. Each features exclusive seating, party tent access, food, drinks, designated parking and admission to each evening’s After Party in the Charles Brown Auditorium. Ticket package prices are $399 for the Patriot Club and $225 for the VIP package. There are a limited number of ticket packages available, so please act quickly.

RV space reservations are also available through the website. Electrical hookups are $150 and dry camp is $95.

All event credentials, i.e. wristbands, will be mailed to concert-­‐goers a month before the festival. Additional email correspondence regarding the shipment will be sent at a later date.

Proceeds from the festival will benefit the Wounded Warrior Center, set to be built in Mammoth Lakes.

Eastern Sierra Music Festival organizers are pleased to
announce  that  Grammy-­‐award  winning  singer-­‐songwriter
Dwight  Yoakam  will  be  a  part  of  the  inaugural  Eastern  Sierra
Music  Festival.

The  July  22-­‐23  festival  will  be  held  right  here  at
Bishop’s  Tri-­‐County  Fairgrounds.  Yoakam  will  headline
Friday  night  at  the  festival,  with  the  legendary  Gatlin
Brothers  heading  up  Saturday   night.  Organizers  will
announce  additional  artists  as  participation  is  confirmed.

Additional Artists to be announced, organizers urge folks to ‘Save the Date’.  The benefit for the National Wounded Warrior Center will be held on July 22 and 23 at Bishop’s Tri-County Fairgrounds.

The July 22-­‐23 festival will be held right here at Bishop’s Tri‐County Fairgrounds. Organizers urge people to save these dates as the festival will feature a host of legendary and up-­‐and-­‐ coming country artists.

Close vocal harmonies helped the Gatlin Brothers score dozens of hits during their 60-­‐year career. Those hits include “Houston (Means I’m One Day Closer to You),” “Broken Lady,” and “All the Gold in California.”

The brothers have earned honors from the Country Music Association and the Academy of Country Music, among others. The prestigious Grand Ole Opry inducted them in 1976.

The Gatlin Brothers are strong supporters of veterans and Armed Services members. Eastern Sierra Music Festival organizers are confident the trio will bring a great energy to the festival.

Larry Gatlin & the Gatlin Brothers will headline the Saturday, July 23 line-­‐up. Additional acts, including the July 22 headline performer, will be announced as appearances are confirmed.

LARRY GATLIN & THE GATLIN BROTHERS OFFICIAL BIOGRAPHY
Larry Gatlin & the Gatlin Brothers have been dazzling audiences for 60 years. It all began in 1955, when Larry was six, Steve was four, and Rudy was two. Since those days, the road that the trio has plowed has taken them to concert stages all over the world, and has seen their records top the charts and touch the lives of fans from eight to eighty.

As Larry says, “There are other priorities in life. I have two granddaughters. Brother Steve has seven grandchildren and Rudy has two kids. We still love the fans and the road and we still love to sing but we want to spend more quality time with our families.”

After performing together as children, Larry went off to college – studying law at the University of Houston. In 1971, he auditioned for the legendary Imperials, Elvis’ backup group. He didn’t get the job, but he met Dottie West, who was the opening act for the legendary Jimmy Dean, who would become one of Larry’s oldest and best friends. Dottie was initially taken with Larry’s resemblance to Nashville songwriter Mickey Newbury. Dottie told him one night in her backstage dressing room at the Landmark Hotel in Las Vegas, “Larry, you look so much like Mickey Newbury, you’ve just got to be able to write great songs.” After the gig in Vegas, Larry went home to Houston, wrote eight songs, sent them to Dottie, and she sent him a plane ticket to Nashville.

Through Dottie, Larry met Kris Kristofferson, who became a champion of Gatlin’s talent as a writer and singer. Kristofferson introduced Larry to Fred Foster at Monument Records which resulted in a contract with the record label. His first album, The Pilgrim, was released later that year. Johnny Cash, wrote the liner notes for his first album, and dubbed him “The Pilgrim,” which is what he called Larry until the day he died.

Steve and Rudy moved to Nashville in 1975 and teamed up with brother Larry to form Larry Gatlin & the Gatlin Brothers. By 1976, the Gatlin Brothers were in the fast lane, thanks to the chart-­‐topping success of the Grammy-­‐winning “Broken Lady.” The hits continued throughout the rest of the decade, with seven more number one songs: “I Don’t Wanna Cry,” “I Just Wish You Were Someone I Love,” “Statues Without Hearts,” “Love Is Just A Game,” “All The Gold in California,” “Houston (Means I’m One Day Closer To You)” and “Night Time Magic.” In addition to being inducted into the Grand Ole Opry, the trio was nominated for awards by the Country Music Association, the Academy of Country Music and the Music City News Awards, among others. “We won some of ’em too,” says Larry.

So, as Larry, Steve and Rudy close out one chapter of their lives, they are looking forward to

the next one. Larry says, “We’re not cutting back because we can’t draw a crowd or that we can’t sing anymore. Today, we sound just like we did 40 years ago … pretty dad burn good. We’re not being run out of the business. We’re not going broke. We’re not down to bread and milk money. We just think it’s time to do some other things, slow down a little bit, and do it with class and dignity – on our own terms. We are grateful to God for our fabulous run and we can’t wait to see what else He has in store.”

In addition to the tour, the brothers will soon release a new Gospel album on Curb Records, titled, Larry Gatlin & the Gatlin Brothers 60th Anniversary Celebration. Larry says, “We were going to call the album, The Gospel According to Gatlin because some of the new songs are a little edgy, a little bit different. Then we realized it was our 60th anniversary, so we went with that as the title. And speaking of edgy, Larry says, “Steve and Rudy and I didn’t get where we are by playing it safe. We have always pushed the envelope, we have always crossed borders others were afraid to cross and we’re not going to stop now … and that is the Gospel According to Gatlin.”

The Eastern Sierra Music Festival presents its next fund-raiser. The “Harvest Hoedown” at Roxanne Tallman’s Hidden Creeks Ranch is set for Saturday, November 7th. Featuring dinner by Classy Cowgirl Catering and entertainment by AZ Dueling Pianos of Temecula.The night will feature a wine tasting by Mineral Winery of Angels Camp. A no host bar will be available through the Bishop VFW Post 8988. Gift bags and bottle bags will be presented by the Eastern Sierra Music Festival “bag ladies”. The night will feature at live auction with many great gifts for the holidays. The hoedown begins with drinks at 5pm, and dinner will be served at 6:30pm. For tickets visit www.wwmusicfest.org. Reserve a stall with a table for 8 @ $500.00, or single tickets $67.00 per person.