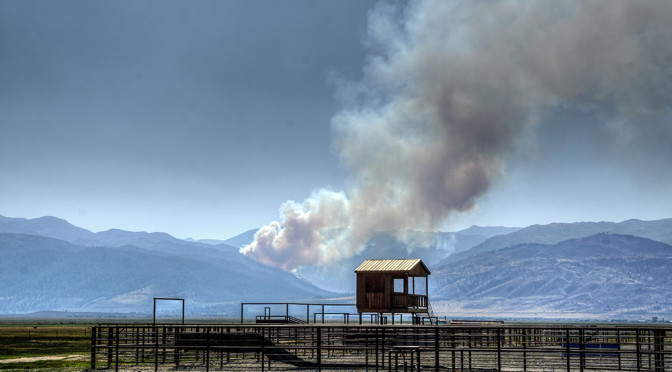 UPDATE: Friday, August 14th.
Fire officials now indicate the cause of the Eagle 2 fire is lightning from earlier in the week. Wednesday, the day the fire took off, there were blue skies over Bridgeport.  The fire is now listed at 150 Acres in size with 178 firefighters assigned.  Perimeter containment is listed at just 3%.

From the US Forest Service:

Fire Crews Work to Contain a Fire near Bridgeport, California

Inter-agency fire crews are working to contain a fire burning on the Humboldt-Toiyabe National Forest just west of Bridgeport, California. The cause of the Eagle Two Fire is unknown. It is currently burning in timber and as of 9 AM Thursday the fire is now  estimated to be around 126 acres.

The fire is one mile south of the Buckeye Campground on the Bridgeport Ranger District. U.S. Forest Service personnel have evacuated the campground and nearby hot springs and closed the Buckeye Road.

The chance of wildfires occurring has increased due to the recent warm temperatures and long term drought conditions. Also, a red flag warning is in effect for western Nevada and the eastern slope of the Sierra Nevada Mountains from 2 p.m. on Thursday, Aug. 13 to 11 a.m. on Friday, Aug. 14 for gusty winds and low humidity. Forest officials encourage the public to be extremely cautious with activities that could potentially cause a wildfire.