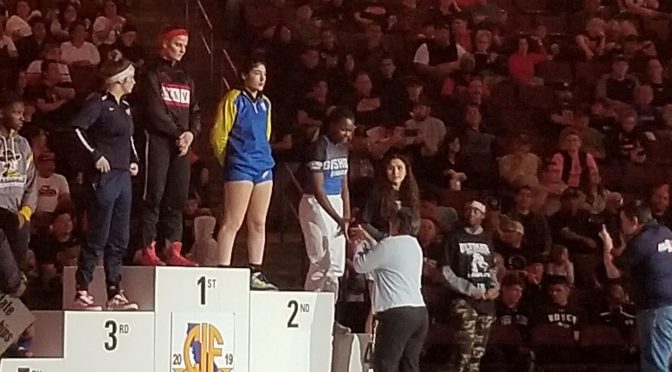 Last week, senior Tia Barfield of the Bishop Bronco Wrestling Team placed 4 th at the 3-day California State Wrestling Tournament in Bakersfield. Competing at 162 pounds, Barfield entered the tournament as the 7 th seed, meaning that she was ranked 7 th in the state.

Tia came back and won the next 3 matches, putting her into the match for 3rd place against Estrada again. In an exciting match, Tia got an early lead and nearly pinned her opponent. However, just before the end of the 2nd period, her opponent used a throw and pinned her.

In her quest for a state championship, Tia wrestled against the 2 nd , 6 th , 8 th and 10 th ranked wrestlers in the state, defeating them all except for the 2 nd ranked wrestler.

Coach Mark Hodges said, “This was a great accomplishment and I am very happy for Tia. Her 4 th place was a big improvement over last year’s 8 th place finish. Tia’s accomplishments this year include:

“There is an old adage in wrestling that you will never be a good wrestler without having a good wrestling partner. So part of Tia’s success goes to senior Mark Mayhugh who wrestled with Tia in the wrestling room and before every match at the state tournament.” Said Mark Hodges.

Senior Mark Mayhugh wrestled in a very tough weight class at 128 pounds, where there were 10 ranked wrestlers, including the top two ranked wrestlers in the state. Mark got a tough draw right off the bat, facing the Number 2 ranked wrestler and although he
wrestled well, he lost. In the consolation bracket, Mark won a match and then faced another tough wrestler and lost by a score of 0-2.

Coach Hodges said, “Mark went out there and wrestled his best. He is a great kid and one of the best wrestlers Bishop has ever had. He is planning on wrestling in college, which will be a first for Bishop as we have never had someone continue wrestling at college.”

Senior Tia Barfield, wrestling at 162 pounds, stormed through her Master’s tournament with no points scored against her. On the first day, Tia pinned her first two opponents in 29 and 44 seconds respectively. On the second day, Tia met the same two girls she saw
last week at the CIF tournament. She scored pins in both matches, finishing off her opponent in the finals in just 45 seconds. Tia becomes the second Master’s Champion wrestler from Bishop; the first was Randy Rogers back in 1985.

Coach Mark Hodges said, “Tia became eligible only in late December. Even so, she has a record of 25 wins and 1 loss. Tia impresses everyone with her wrestling prowess. Unlike many wrestlers, her goal is not to ‘make it to state’, but rather to win the state championship. Tia will be competing in the State Tournament in Bakersfield starting Thursday, where she is currently seeded #4 in the state. Tia and Mark become just the 5th and 6th Bronco wrestlers to ever make it to a Master’s tournament, which is testament to how good they are.”

On Friday, five members of the Bishop Bronco Wrestling team went to Highland High School in Palmdale for a “Team dual” tournament with 4 other teams. The Broncos attending were
Sophomore Joseph Mayhugh at 152 lbs
Junior Angel Santana at 160 lbs
Junior Tyler Cox at 170 lbs
Junior Orlando Ruelas at 182 lbs
Junior Gabe Shoshone at 220 lbs
Only Mayhugh at 152 lbs and Santana at 160 lbs were able to compete. The day started slow for the Broncos with Mayhugh getting pinned and Santana losing by points in the final seconds of his match against Highland High School. These turned out to be the only losses on the day for the Broncos.
Things turned around in the next matches against Quartz Hill High School where Mayhugh defeated his opponent 10-7 and Santana pinning his opponent in just 43 seconds.
Mayhugh continued to dominate by pinning his opponent from Antelope Valley in the second period. Antelope Valley had no opponent at 160 or 170 lbs, so Santana went up to 182lbs where he pinned his opponent in the 2nd period.
The final matches for the Broncos were against Highland High School. In his match at 152, Mayhugh quickly fell behind and was nearly pinned in the first period. He fought back and by the m middle of the third period tied the score 12-12. With just seconds remaining, Joseph was able to pin his opponent. Angel Santana finished the day by pinning his opponent in just over 20 seconds.
Coach Shawn Joseph said, “I’m pleased with the quality of wrestling from both Joseph and Angel. I was very impressed by Joe coming back from a 0-8 deficit to tie the score and then pin his opponent. Angel continues to impress us with how quickly he learns moves and is able to use them in matches.”

The Bronco with the best record this season is Angel Santana with a record of 5 -1 with all 5 wins being pins.