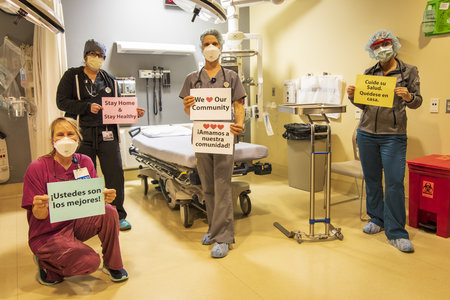 Northern Inyo Hospital held a press conference on Thursday, April 16, 2020, in response to the five new confirmed cases of COVID-19 in the county. All cases were confirmed at the hospital, bringing the total amount of victims to seventeen.

Dr. Stacey Brown could not comment on whether or not the cases were all connected, but did say that each patient’s tests were confirmed to be in the same batch of testing kits that were sent to LabCorp in Phoenix, Arizona. “Those five positive cases were in a batch of twelve people that we tested last weekend,” Brown said.

The Rural Health Clinic Director added that he is not overly alarmed by the five cases. It is more likely that the test results were confirmed at the same time and less likely that every person tested came down with the virus at the same time. Brown said, “The new confirmed cases is not diagnostic of a surge, but more of a testing glut. Usually five to eight tests per day is what we send out for lab analysis. With just one data point to look at and five tests confirmed, I can’t say we are in a surge.”

Turnaround time for testing results will be faster than the usual two days it takes to receive coronavirus testing outcomes. The in-house testing has been approved for the hospital to use, which will allow for patients to find out whether or not  they have the virus in approximately an hour. “As of today, we have in-house testing via nasal swab available,” Brown remarked.

Interim Chief Medical Officer, Dr. Will Timbers, added that the healthcare district has also implemented antibody testing, which will let patients know whether or not they have built up immunity to COVID-19. “Antibody testing in-house is available as well. However, we are not entirely sure how accurate it is right now,” Timbers said.

California Governor, Gavin Newsom recently said in a press conference that in order to lessen up on societal restrictions and go back to some semblance of normal life, he would need to see a decrease in hospitalizations and ICU admissions. The governor outlined “the six critical indicatiors” the state would need to see in order to consider modifying the Stay-at-Home guidelines.

When asked whether or not there has been an increase or decrease in hospitalizations locally, Dr. Timbers said there has been a moderate increase of admissions to the hospital, but not enough to warrant alarm. “Volumes have been up marginally, but nothing that is coming at all close to taxing our resources,” Timbers expressed.

It has been well documented that the majority of cases of COVID-19 are considered by the medical community to be mild, with eighty-one percent of patients reporting mild symptoms. However, just because it is deemed to be a mild case, does not mean that many of the individuals who come down with the sickness do not experience tremendous pain and discomfort.

Timbers also spoke about the misconception that many people have when it comes to what the word “mild” means relating to coronavirus. “Mild, severe,  and critical are used to classify illness in the medical community. Eighty-one percent of people who have COVID-19 are determined to be a mild case based on if they have mild viral pneumonia or no pneumonia. Mild cases in the medical community is not what the majority of the public would perceive as a mild,” Timbers remarked.