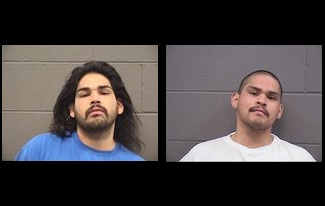 During the early morning hours of April 12, 2020, the Mono County Sheriff’s Office responded to a report of a physical altercation which occurred on the Benton Paiute Reservation. The altercation escalated and resulted in a shooting. Through the course of the investigation, witness statements and physical evidence were collected, which led investigators to identify two suspects.

On April 14, 2020, members of the Mono County Sheriff’s Office, Inyo County Sheriff’s Department, Bishop Police Department, California Highway Patrol, and the Mono County District Attorney’s Office served search warrants on two residences located on the reservation. During the warrant service, both suspects were arrested without incident. Marque Santos Marquez was arrested and charged with Assault with a Deadly Weapon, Battery with great bodily injury, and Felon in possession of a firearm. Emilio Elizarraraz was arrested and charged with Attempted Murder, Assault with a Deadly Weapon, and Shooting at an occupied vehicle.

We thank our allied law enforcement agencies for their assistance with this investigation. The investigation is still ongoing, and anyone with information is encouraged to contact the Mono County Sheriff’s Office at
(760) 932-7549 ext 7.