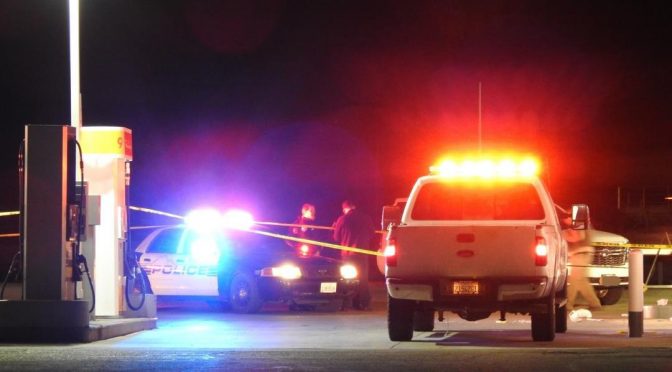 An attempted robbery was foiled by an Eastern Sierra resident Monday evening.

When officers arrived on the scene, they discovered an adult male on the ground in the parking lot with multiple gunshots wounds. According to a press release from the Bishop Police Department, the individual died on the scene. “He [The male] was unable to speak. A handgun was nearby, and medics began life saving measures, but he died shortly thereafter.” At this time, the Bishop Police Department is not releasing the identity of the male until next of kin is notified. However, Police Chief Ted Stec told KIBS/KBOV News that the deceased individual was a non-local.

It appears as though the perpetrator was a suspect in an attempted robbery. “The investigation thus far tends to show the decedent attempted to rob one of our local residents shortly after he parked and exited his vehicle at the Shell,” the Bishop Police Department press release says. “It is likely the decedent had been looking to target someone in the parking lot. The decedent shot the victim more than once. The victim, who had a concealed carry permit and was armed, returned fire. He then managed to enter his vehicle and move to a better location. The victim received serious wounds but was able to provide BPD with good details.” The victim is currently undergoing treatment for multiple gunshot wounds. He was transferred to a hospital in Reno, Nevada, for further evaluation.

After discovering the deceased suspect, Bishop Police issued a BOLO for a white Ford Escape being driven by a female wearing a beanie after a witness described the car in which the deceased male attempted to get away.

Later in the evening, authorities located a crashed and unoccupied vehicle that matched the wittiness’s description on Jean Blanc Road near the Laws area. A CHP helicopter and a K9 unit from Ridgecrest PD assisted in locating the female suspect.

Around 2:00 am, the wanted suspect called 911 to turn herself in due to cold weather. “It’s too cold, I am going to freeze to death.” the suspect told the dispatcher during the call. The temperature at that time was 19 degrees.

The female has been identified as Brandee Sue Trujillo, age 46 of Oildale, CA. She was booked into the Inyo County Jail on charges relating to a fugitive running from justice.

The investigation is still ongoing. If anyone has relevant information about this incident, you are encouraged to contact the Bishop Police Department as soon as possible at 760-873-5866.