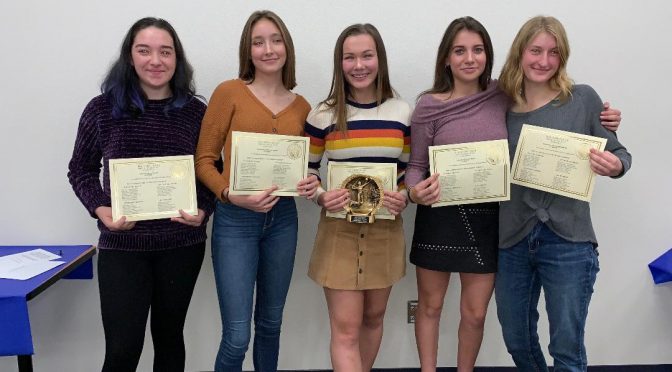 The BUHS Volleyball team wrapped up their 2018 Season with a celebratory banquet.

Many Broncos were recognized for their successes as stellar student-athletes throughout a great 2018 season.

-20 of the 24 players were recognized as Scholar Athletes, maintaining a 3.5 or higher GPA throughout the entire season!

All League All Academic:  Sydney Frigerio

The Bronco Volleyball program has had three All League MVPs in the last 7 years,  and is proud to have yet another one join this exceptional group! Thank you for everyone’s support!

ALL SKILLS VOLLEYBALL CAMP:  All girls in the Owens Valley interested in learning volleyball skills or current volleyball players, the 5th annual  All Skills Volleyball Camp hosted by Club Texas Volleyball and Bishop Bronco volleyball is next week Monday through Friday, 5/9-5/13.

Kiara Cox Selected to Down Under Tournament Team

Bishop Union High School Junior Kiara Cox has been selected to play this summer in the Down Under Sports Tournament.  Cox, a Junior at Bishop Union High School, will be participating in the international event on the Pacific Conference Volleyball Team.  Cox follows a path blazed by her former Bronco teammate Maria Jimenez.  Maria made the Down Under team this past summer and encouraged Cox to make the journey this summer.

Cox notes that she is looking for sponsors to make donations toward the cost of competing down under.  You can make a contribution online at
www.DownUnderSports.com/payment?160660

To hear Kiara talk about the opportunity to play Down Under listen to her interview from this past Saturday’s sports show.  Kiara’s portion of the program begins approximately 9 minutes into the show.

The Broncos volleyball team and families met on Monday, December 7th to celebrate a successful season. While both the varsity and JV teams were young, varsity finished 2nd in league and were extremely competitive in the first round of CIF Playoffs. JV finished with a 5-3 record and showed great potential for future varsity teams.

3 of 4 local teams fall in Tuesday’s Opening round

Bishop Union, Mammoth, Lone Pine, and Big Pine volleyball all opened play Tuesday in their respective playoff brackets, only Mammoth survives to play in round two.  All three losing teams hit the road Tuesday while Mammoth used their home court advantage advancing to Thursdays second round.

Coach John Morris reports that the Huskies defeated St. Bernard 25-6, 25-9, 25-19 and advance to the 2nd round of the CIF Southern Section 4A tournament on Thursday.   Mammoth is awaiting the winner of Katella and Ramona Convent.

The Broncos fell in five games to Taft high school Tuesday.  Coach Linda Frigerio’s comments, “Going in ranked #9, we were prepared to battle the #8 ranked Wildcats.  Based on playing them in playoffs round 2 last year, we knew we again would be neck and neck and would have to have to play their best to have a chance at victory. After 5 grueling games with scores of 19-25, 25-23,27-29,9-5 Taft came up on top and we wrapped up our season going down swinging. I am incredibly proud of every single girl on this volleyball team for a season that exceeded my expectations.  I believed going in to the season that we would be rebuilding because we are so young.  With only 2 seniors I anticipated the lack of experience would be a detriment.  Instead, they played hard, fought hard and  powered through every match, many of which went 5 games, and lost with character and won with dignity every time.”

Coach Mel Joseph’s 1st round report:
Lone Pine traveled to Panorama City on Tuesday to take on St. Genevieve in the First Round of the CIF SS 4-A girls volleyball playoffs.  The Lady Eagles ended their season falling in three games to the number 9 ranked Valiants 18-25, 13-25, 19-25. “ We played well, this team was definitely beatable, we just make some key errors at crucial times that allowed St. Genevieve to create separation.  Having competed in the tough DML against teams like Desert and Mammoth, the girls were well prepared for post season play.  Having competed all season long with only seven players, I am proud of what we accomplished, we met every goal that was set from making the Gold Bracket at the Cal City Tournament to qualifying for post season”.  Coach Joseph did bring up Jessianne Joiner, Celia Ray, and Juliann Jones from the DML Champion JV squad noting that all three had positive touches on the ball in this post season match.  Coach Joseph would like to thank all the fans for their support throughout this season including to 40 plus that made the trip south on Tuesday. Coach Joseph would also like to thank first year assistant and JV Coach Courtnie Hunter for her work this season. LPHS says farewell to six seniors (Niki Martinez, Abby Southey, Lena Cariou, Katelyn Button, Lacie Jones, and Katie Lacey) and wishes them good luck in their endeavors.  Coach Joseph looks forward to his 25th season as the Lady Eagles Skipper.

Bishop Union Football
The Broncos finish the regular season with a 4-6 record including a 2-2 mark in the High Desert League. The Broncos are the #10 seed in the CIF Central Section Division 5 Championships. BUHS will travel to #7 Mendota High School Friday, November 13th. Fowler High School, the #2 seed, has a bye into the second round. The winner of the BUHS-Mendota game will travel to Fowler for the Quarterfinals Friday, November 20th. Friday’s opening round game will be broadcast live on AM 1230 KBOV, and streamed live at kibskbov.com through the listen live link, kickoff is set for 6pm. Mendota has a 6-4 record and tied for 2nd in the West Sierra League. Mendota is located west of Fresno just 368 miles from Bishop.

Lone Pine Volleyball
The Golden Eagles will travel to Panorama City Tuesday for opening round action in the CIF Southern Section division 4A volleyball championships. St. Genevieve will play host to the Golden Eagles. St. Genevieve is Champs of the Santa Fe League with an overall record of 13-4-1. Lone Pine tied for 4th in the Desert Mt league with an overall record of 11-12-2.

Big Pine Volleyball
The Big Pine Warriors will travel Tuesday to Hawthorne in southern California in opening round action in the CIF southern section division 5A volleyball championships. The Warriors will take on Wiseburn-Da Vinci High School. The Wolves are 9-7 on the year and champs of the Mulholland League. Big Pine finished 5-7 on the season good for third place in the Hi-Lo League. A win for Big Pine most likely has them facing the tournaments #1 seed Tarbut V’ Torah in the second round.

The Broncos wrapped up the regular season with a strong three game sweep of rival Kern Valley Thursday night. The win gives Bishop Union the runner up spot in the High Desert League. Frazier Mt completed an unbeaten HDL campaign claiming the league championship. Bishop will no prepare for the CIF Central Section playoffs.

November 4th Volleyball round up

The Bishop Union High School Broncos traveled to Frazier Mt Tuesday for a key High Desert League Volleyball match. Frazier Mt had defeated Bishop Union in Bishop back on October 15th. The Broncos were hoping to move even with the Falcons in the HDL standings, but Frazier Mt took the match in straight games. Frazier Mt claims the HDL title winning 25-20, 25-16, and 25-19. Bishop Union will now wrap up the 2015 regular season with a home match Thursday, November 5th hosting rival Kern Valley. JV action begins at 4pm with varsity to follow.

Lone Pine Volleyball
The Golden Eagles were not on the court Tuesday, but did pick up a major win. Coach Mel Joseph reports that Lone Pine will represent the Desert Mountain League as the number 4 team in the upcoming CIF southern section postseason. Playoff pairings will be released on Friday. Vasquez defeated Desert Christian Tuesday evening in their finale, creating a tie for the final DML spot. A coin flip was conducted following the match and Lone Pine won.

It was a back and forth battle Thursday night between the Bishop Union High school volleyball team the Rosamond Roadrunners.  Bishop battled tough winning their second road, HDL game of the week.  The win moves Bishop to 4-1 in High Desert League play, good for second place behind unbeaten Frazier Mt.  Bishop hosts California City next Thursday October 29th and travels to Frazier Mt on Tuesday November 3rd.

Coach Steve Parks Report from Rosamond
Nothing was easy Thursday night in Rosamond.  Bishop Broncos
volleyball traveled to play the Roadrunners on their home court.
Bishop got off to a slow start with Rosamond’s strong serving but
fought back and almost won.  The first game went to the  Roadrunners, 23-25.

The Broncos came back fighting in the second game, taking an early lead with Sydney Frigerio’s serves.  The Roadrunner defense turned back repeated attacks by Bishop but Bronco serving widened the lead.  Despite a surge by Rosamond, Bishop won the second game, 25-18.

Game 3 was a repeat of the second game, with aces by Frigerio, and the Broncos won 25-18.  Game 4 started the same way as games 2 and 3 but the Roadrunners fought back with great defense and took the lead from the Broncos.  Bishop tied it back up but Rosamond pushed back harder and the Broncos eventually lost 23-25.  However, the excitement began in the fifth game.  Bishop took an early lead again but the Roadrunner defense and offense dominated with a 13-7 lead over the Broncos in a game to 15 points.  The Broncos players dug deep inside themselves and began an incredible run that first tied the game 13-13 and then went on to win 16-14.  Rachel Turner’s serves and Carly Todd’s finishing kill gave the match to Bishop.

The Bishop Union High School Bronco Volleyball team returned to their winning ways Tuesday night with a successful trip to rival Kern Valley.   The Broncos won a key High Desert League volleyball match in straight games.  Winning at rival Kern Valley is always sweet, but the Broncos needed the win to keep pace with league leading Frazier Mt.  Bishop fell to Frazier Mt on October 15th but will have a chance to avenge that loss with a trip to Frazier Mt on November 3rd.  Frazier Mt is currently 4-0 in High Desert League play with the Broncos at 3-1.

The Bishop Broncos traveled to Kern Valley on Tuesday, October 20th, to play the Broncs in their fourth league game of the season.  Bishop won the match in three games 25-11, 25-19, and 25-11.  The Broncos dominated with their serves and attacks, taking an early lead in all three sets and then widening that lead in two of the three games.
Sydney Frigerio and Carly Todd were top servers, with 29 points scored in 41 attempts.  All of the Broncos were aggressive at the net with top scorer Rachel Turner putting away 7 kills out of 14 attacks.
Maria Jimenez dominated with her attacks in the third game, scoring 3 kills in 7 attacks.  Haley Hersley scored 2 kills in 2 key attacks
that finished off the third game.  The Broncos are on the road again
on Thursday, October 22nd, to play Rosamond.