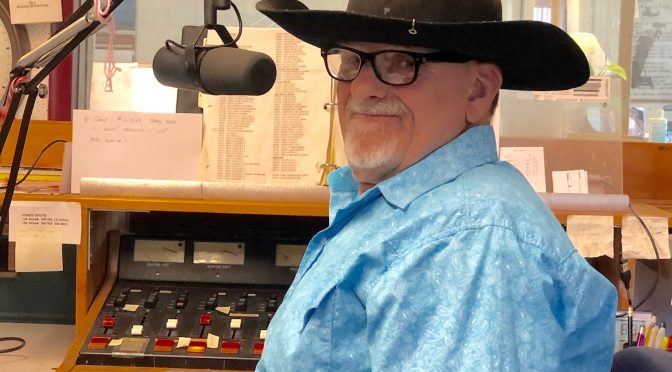 With heavy hearts, the KIBS/KBOV family is sad to announce the passing of our News Director, Ken Harrison. Ken left this world early on the morning of July 21st, holding the hand of the love of his life and devoted partner, Sonya Hernandez. Ken leaves behind, sons Johnny Harrison and Trevor Harrison; sister Brenda Robinson; niece’s Cheri Noel, Kandi Archibald, and nephew Greg Kennedy.

As well as Sonya and her son, Chase.
We are devastated by his passing, and relieved his suffering is over.
Ken lived his life to the brim in service to others. He will be forever remembered for his work in Unity Church, involvement and commitment to his home town community and in the community of Bishop,  where he found a second chance to live his best life in a place he had always loved, with a job and partner he adored.
Always ready to lend a hand to inform, entertain and connect with others, he lived several lives in his one lifetime. Truly making  a lasting and profound difference in the lives of so many. Ken wore many hats and touched many lives – as a father, partner, writer, broadcaster, DJ, comedian, angler and mentor to the masses.

Ken Harrison was a good man.

We will remember our friend Ken with love and affection.

In lieu of flowers, donations to help Sonya with Ken’s final expenses can be sent to Sonya Hernandez, care of KIBS. 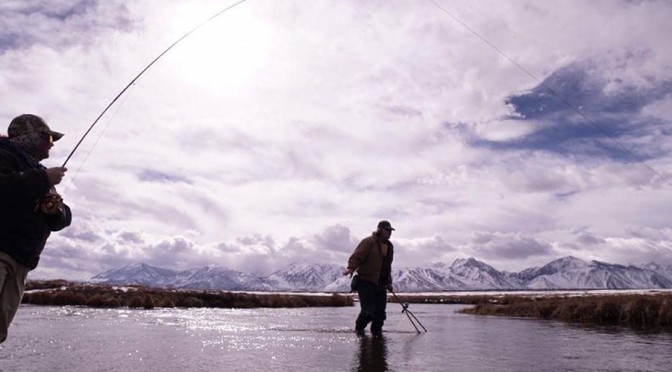 The 33rd Annual  KIDS FISHING FESTIVAL returns to Mammoth’s SnowCreek Resort ponds from 8am-1pm on July 30th. Rods & reels are provided as are guides to help the kids catch our 1 pound trout with Power bait supplied by Berkley. There are several educational booths from the CA. Dept. of Fish & Wildlife such as a casting booth, archery lessons, dissection, and lots more. The Mammoth Lakes Lions Club offers donuts, orange juice and coffee plus the Latin Market will have their Mexican food truck. This FREE event is sponsored by Eastern Sierra Artists and the Town of Mammoth Lakes. Go to KidsFishFest.com for more information or call 760-937-2942. No advance registration is required. 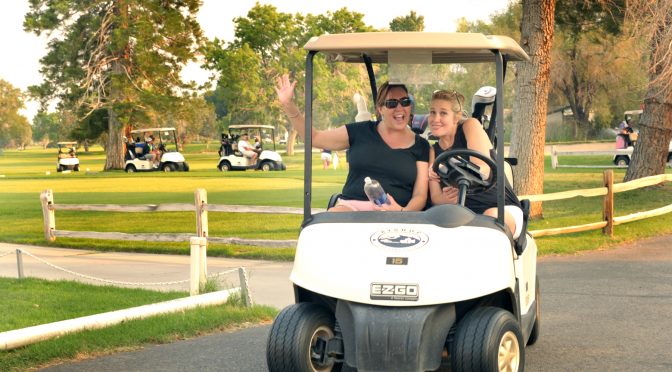 The Bishop Area Chamber of Commerce is teaming up with Bishop Country Club for a fun afternoon of golf, games and great food! Slated for Saturday, July 30th. This golf event is not your typical tournament, but it will be a whole lot of fun for players of all skill levels! 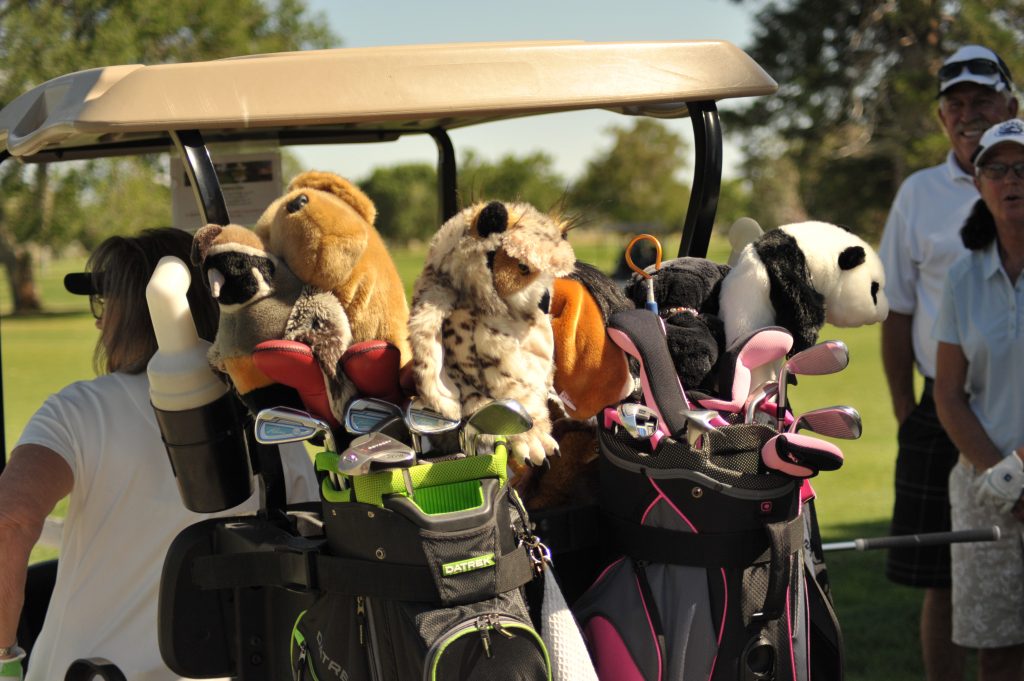 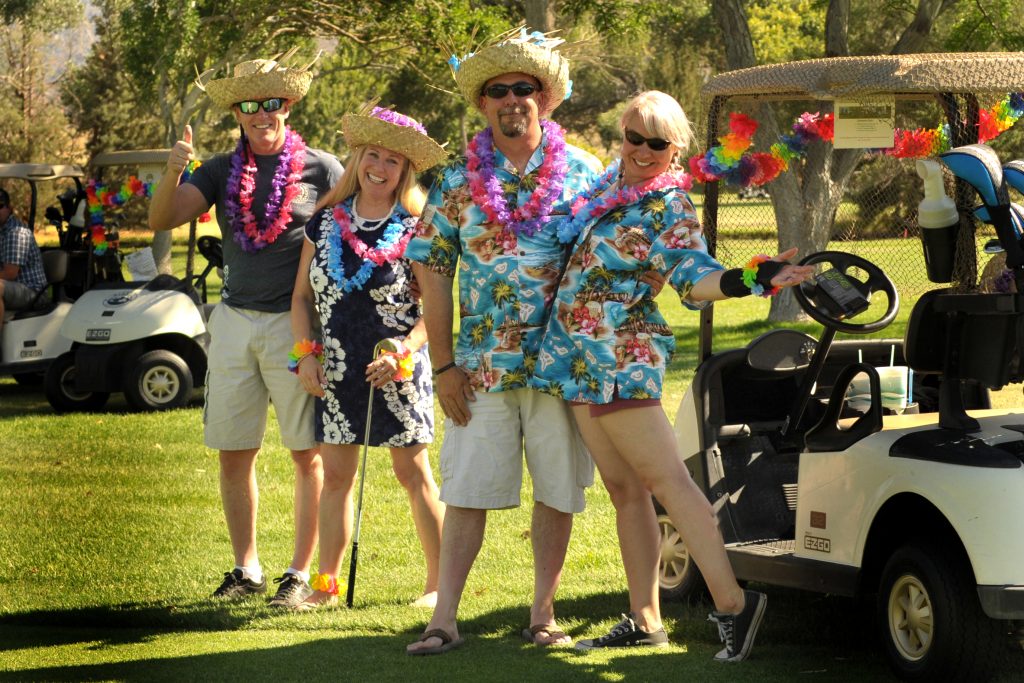 Each hole will feature a different game with prizes for each two-person team. Everyone who plays will also be entered into a raffle for big prizes, including cash, gift certificates, and a brand new Ashley furniture rocking recliner! All players will also be treated to a delicious barbecue dinner. 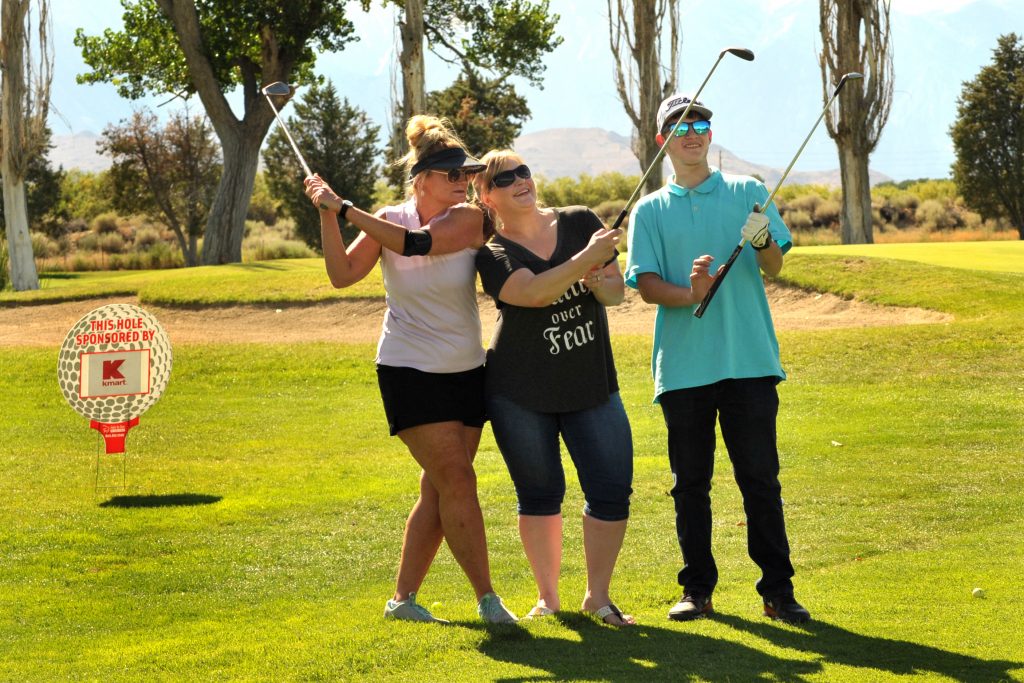 Cost is just $50 per person and includes golf games, cart, raffle entry and dinner! Check-in begins at 3pm with golf games starting at 4pm. This event is open to everyone – members, non-members, good golfers & hackers too! Proceeds will benefit the Bishop Chamber of Commerce, a community based non-profit organization that works hard to improve our local economy. Space is limited, so register today by following the golf fun day link on www.bishopvisitor.com. 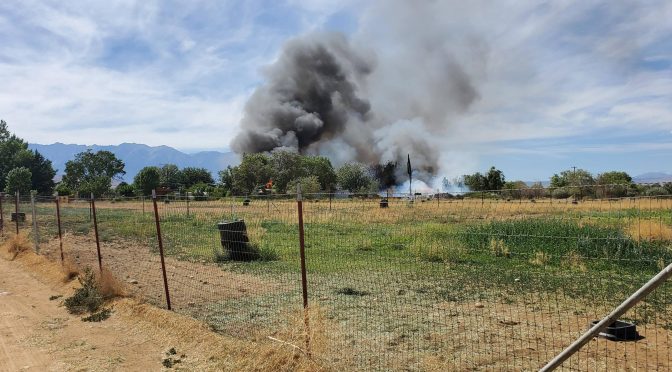 structure fire. When the first unit arrived at the scene, three structures were already fully engulfed, with

fire rapidly spreading into the nearby brush and neighboring residences due to windy, dry conditions.

Seeing the magnitude of the incident, Bishop Fire requested mutual aid from throughout the region.

units towards the spreading vegetation fire to protect nearby neighborhoods.

Friday’s high winds, along with narrow access areas, propane tank involvement, and a lack of nearby fire

Circle and had to fight the fire from Watterson Road. Seventeen water tenders made multiple trips to

draft sites and fire hydrants to provide enough water to suppress the blaze.

Tumbleweed Lane and Indian Creek Drive were evacuated as the fire spread. These evacuation orders

were lifted later in the evening once forward progression of the fire was stopped. The Watterson Road

Firefighting resources remained at the scene throughout the night Friday, all day Saturday, and continue

to patrol the area as needed.

Nine residences and approximately 20 outbuildings were destroyed in the fire. Four additional

residences were damaged. The cause of the incident remains under investigation, and is believed to be

treatment. One civilian was injured.

“Our hearts go out to everyone who lost their homes and were displaced by this fire,”

said Bishop Fire Chief Joe Dell. “We are extremely grateful to everyone who stepped up to help fight this

fire, and to everyone who continues to help those affected.”

responded from throughout the Eastern Sierra to help fight the Fairview Fire, including Big Pine,

American Red Cross also provided assistance during and after the fire.

Additional thanks go to Two Brothers from Italy in Big Pine, who shut down their restaurant to make

pizzas that they then donated to the firefighters, Vons of Bishop, which donated sandwiches, snacks and

water, and the countless other groups and individuals who came forward to support the firefighting and 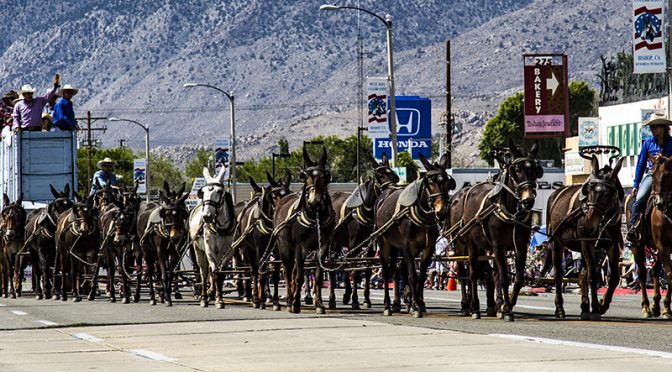 MULE DAYS IS BACK FOR ITS 52nd YEAR WITH THE MAGNIFICENT, TALENTED MULE! WATCH AMAZING CLINICS WITH UNIQUE PRESENTATIONS! CATCH THE MULE’S AGILITY IN THE MANY COMPETITIONS! MULE DAYS HAS GREAT ENTERTAINMENT, VENDORS FOR SHOPPING, AN AMAZING PARADE AND LOTS OF FOOD…EVEN FREE MUSIC BY POPULAR DAVE STAMEY! BRING YOUR RV TO THE FAIRGROUNDS FOR FUN CAMPING! YOU CAN BOOK EVERYTHING ON LINE AT MULEDAYS.ORG OR CALL 760-872-4263. 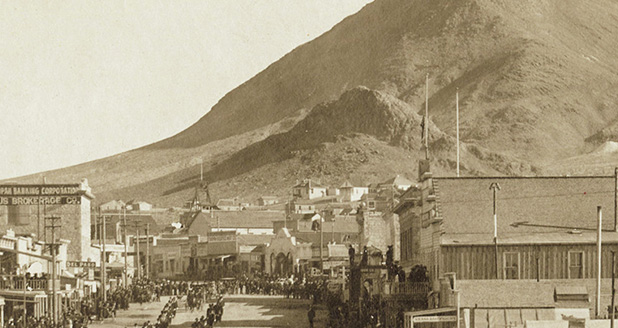 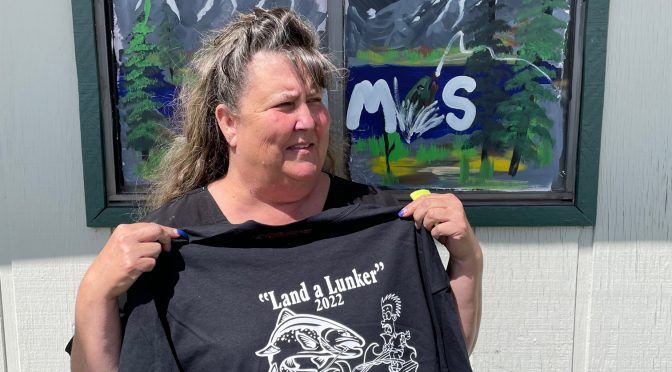 Brandy Scott, of Bishop, was the Grand Prize winner of our annual Land of Lunker contest, which ran up to the opening weekend. Callers during the Gary Young Morning Show guess the weight – 2, 3, 4, or 5-pound Lunker they would virtually “catch.”  Win or not, callers’ got a limited edition Land of Lunkrer T-Shirt, and their names were put into the proverbial hat.

The Grand Prize drawing, held on Monday (5-2) went to Brandy. She wins a two-night stay at the contest’s sponsor, Tom’s Place Resort. 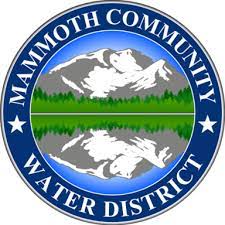 A Level 3 Water Supply Shortage has been declared by the Mammoth Community Water District.

Under Level 3 restrictions, irrigation is only allowed two days a week – Thursday and Sunday for odd number addresses, Wednesday and Saturday for even number addresses. Irrigation can only occur during the hours of 1 am to 6 am and 8 pm to 11 pm.

MCWD reminds that Mammoth relies on local water supplies and does not use imported water.

“During the Level 3 Water Restriction imposed in 2015, we saw a 38 percent reduction in water demand from our customers,” stated Board President Tom Smith. “The state recognized our community for this accomplishment, and we are optimistic that we will see the same response this year.”

The jump from Stage 1 to Stage 3 coincides with Governor Newsom’s order for water suppliers to step up their response to the
current drought in California. 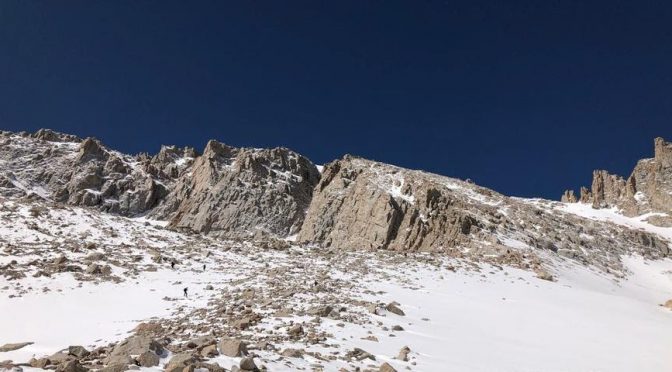 During the early afternoon of Monday April 18, Inyo County Sheriff’s Dispatch received a report of a deceased body below the 99 switchbacks of the Mt. Whitney main trail.
Due to the time of day, Inyo County Search and Rescue planned a recovery for the following morning. However, by Tuesday AM, there were extreme high winds that would inhibit an aircraft to reach the subject’s location.
Inyo SAR and California Highway Patrol H80 decided to attempt the recovery at first light on Wednesday. They were able to fly over the subject’s location Wednesday morning, but due to high gusts of wind they were unable to land or hoist. Inyo SAR and CHP H80 then attempted to fly again early afternoon.
On second attempt, they were turned around before reaching the subject’s location. High winds and snow deterred further attempts for the remainder of the week but on Saturday April 23, with a clear weather window, CHP H80 was able to fly and insert two Inyo SAR members via hoist to retrieve the deceased subject.
Within the past 12 months, there have been four confirmed deaths of hikers attempting to summit Mt. Whitney. Many of these have been in spring or early summer due to falls on snow and ice, where the subject did not have or know how to use critical gear like crampons and an ice axe.
Photo Courtesy of Inyo County Sheriff’s Office 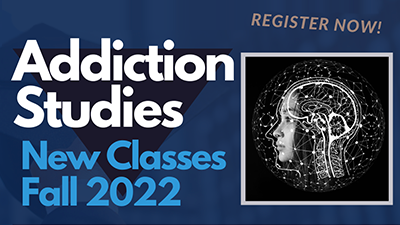 Are you interested in the growing field of drug and alcohol dependency treatment, prevention, and education?  Cerro Coso Community College is offering NEW classes in Addiction Studies this fall.

Students will explore both theoretical and evidence-based concepts, practices, and policies of Addiction and Recovery.  Coursework will look at the mental and behavioral impact of substance use, addiction, and recovery on individuals, families, and communities while also considering how problems and solutions must meet the concerns of multicultural and diverse populations.

Students interested in further pursuing an education in Addiction Studies are encouraged to contact the College Counseling Department at 760-384-6219 or email counseling_forms@cerrocoso.edu. 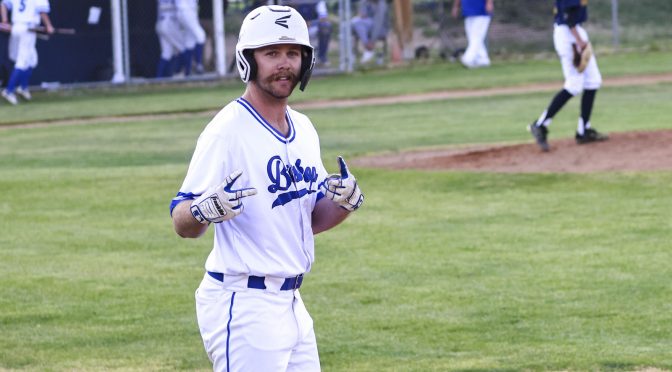 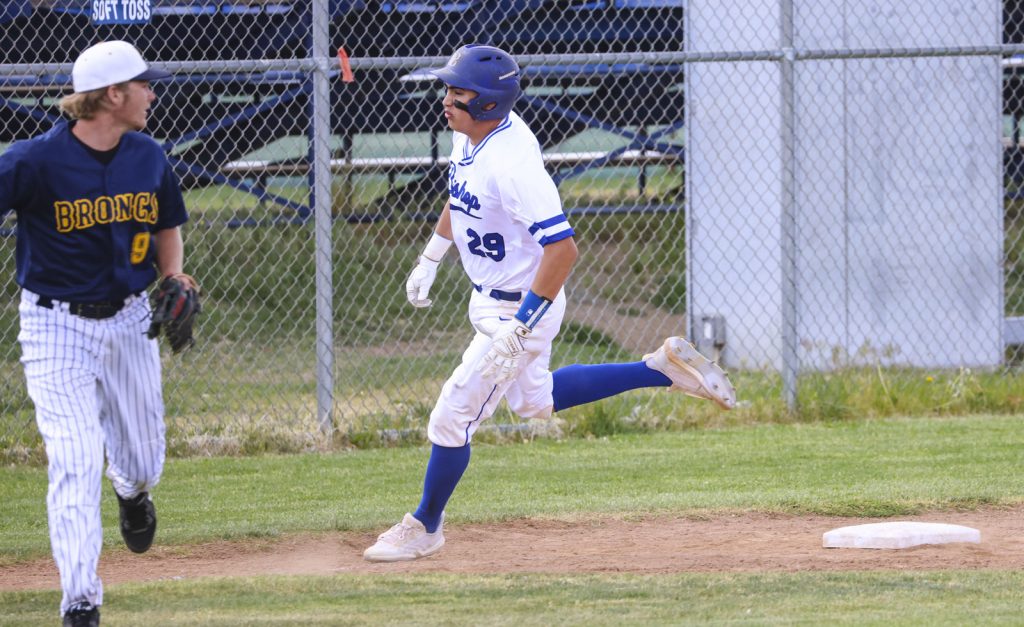 The  Broncos got things moving in the first inning when Reese Dondero homered on a 0-1 count, scoring three runs. 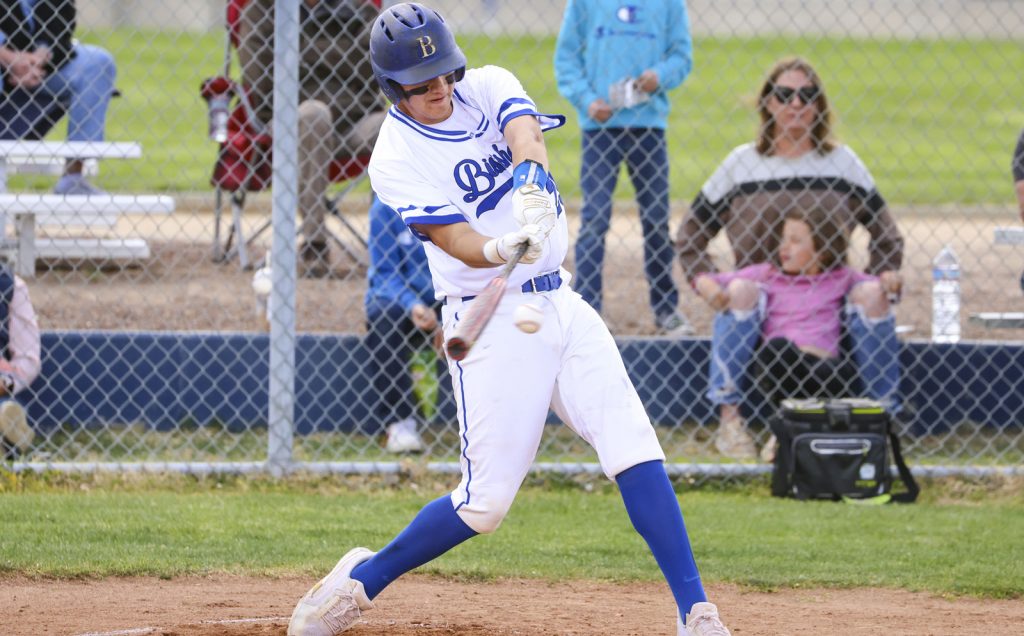 Jake Frigerio got the start for Bishop Broncos. The fireballer surrendered four runs on three hits over two innings, striking out two. Acie Valdivia shoved from the mound for 3 innings, giving up 2 hits and striking out one. 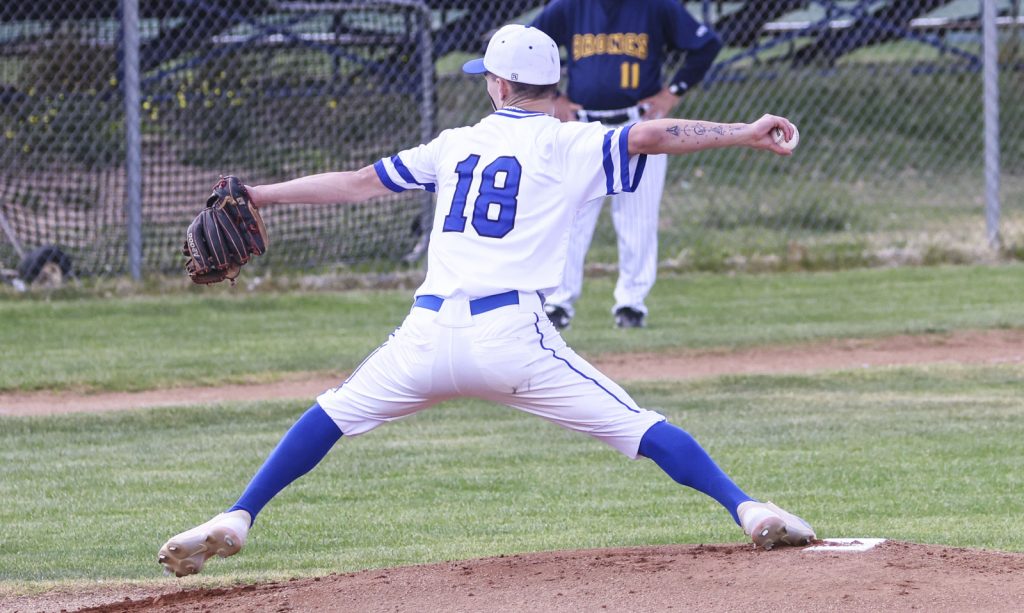 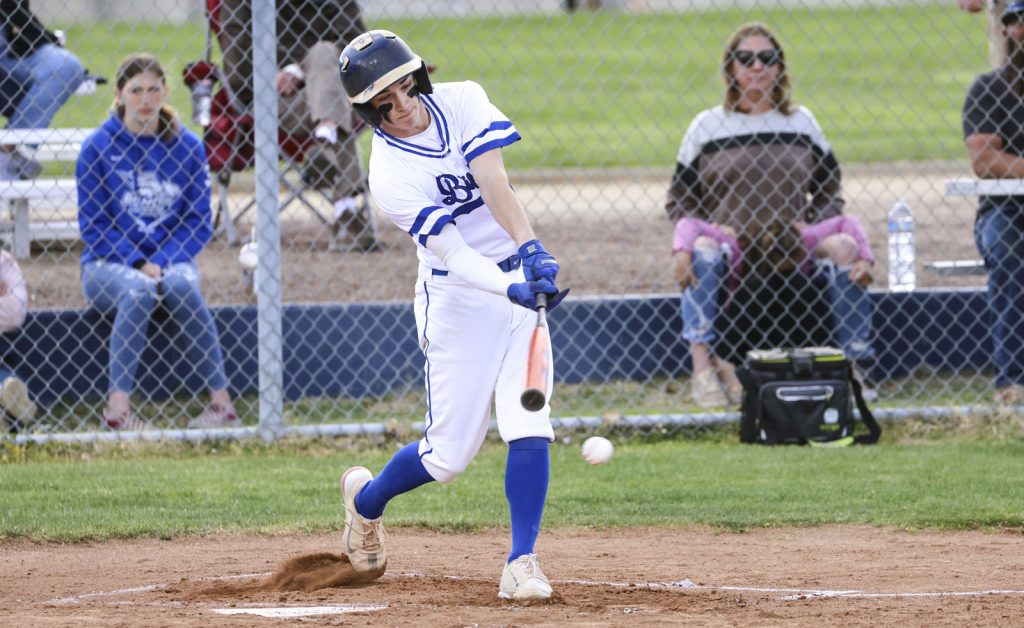 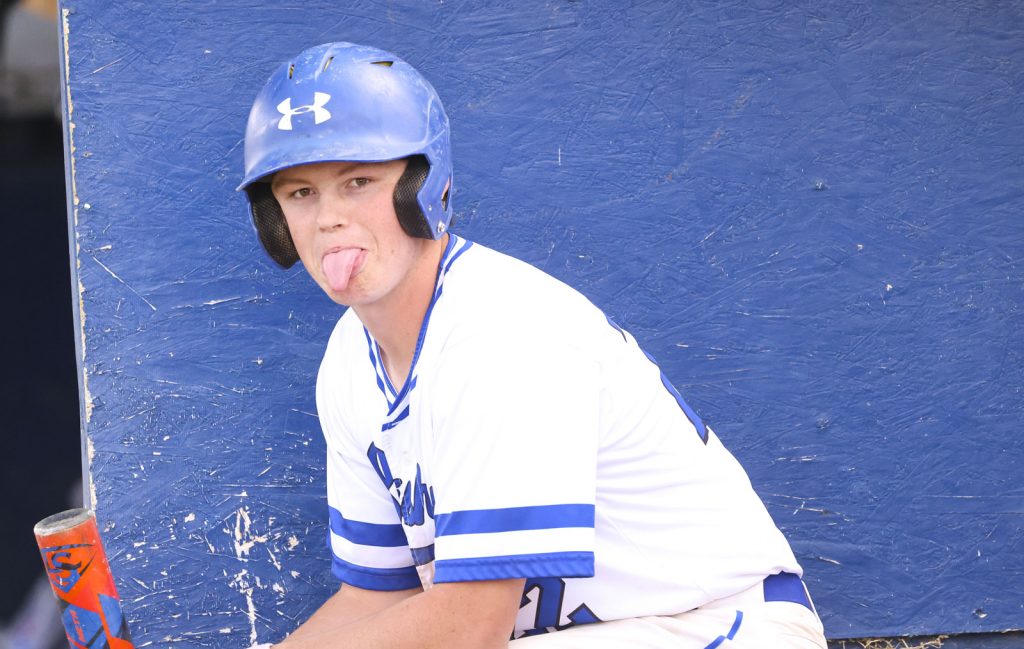 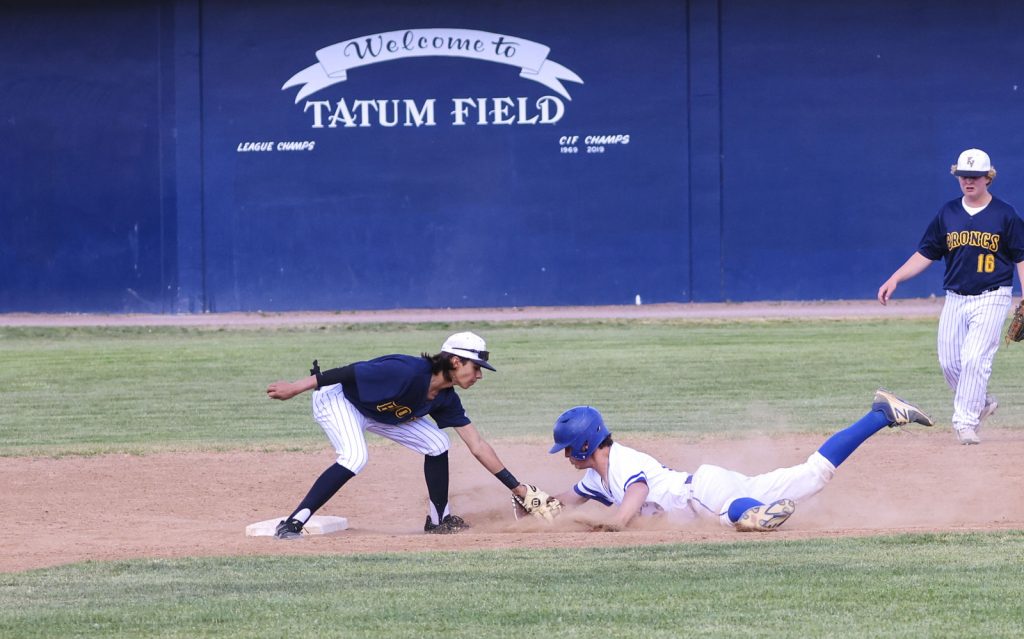 Bishop Broncos got things moving in the first inning when Reese Dondero homered on a 0-1 count, scoring three runs. 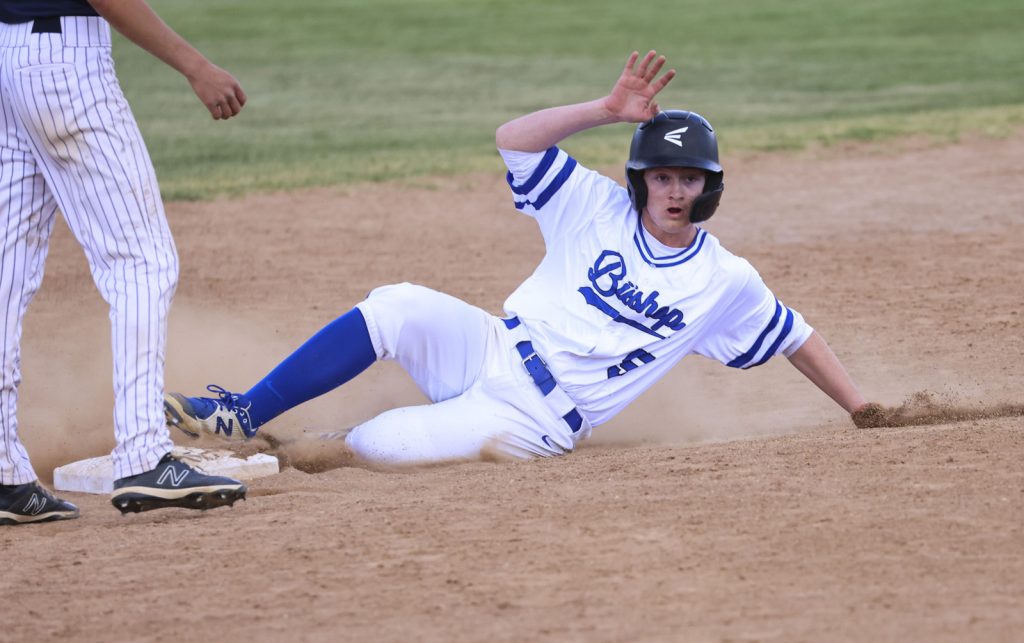 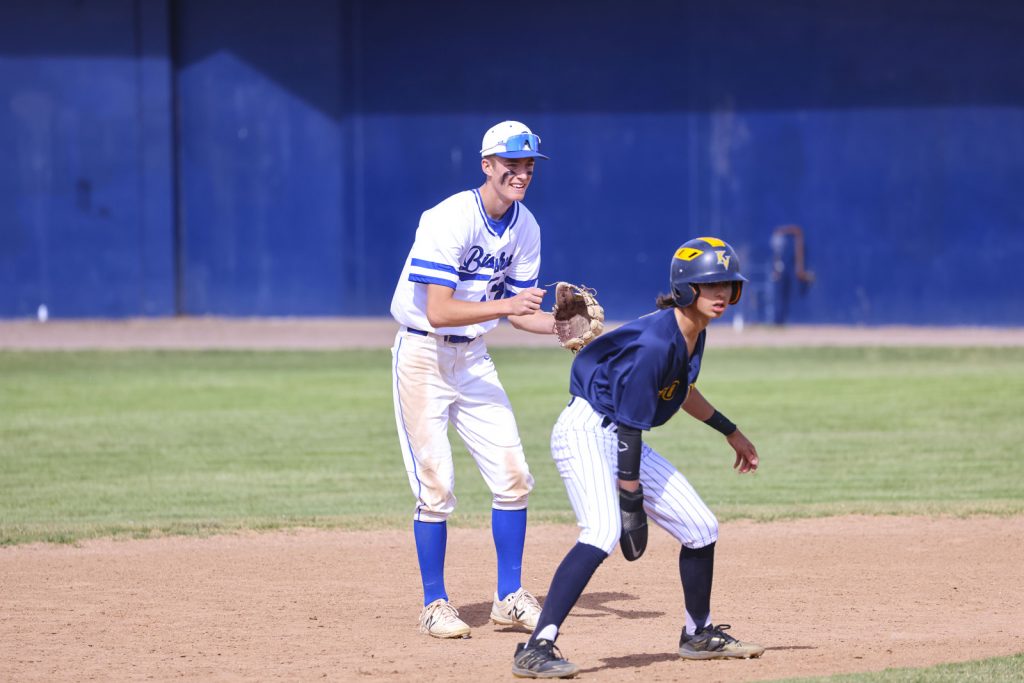 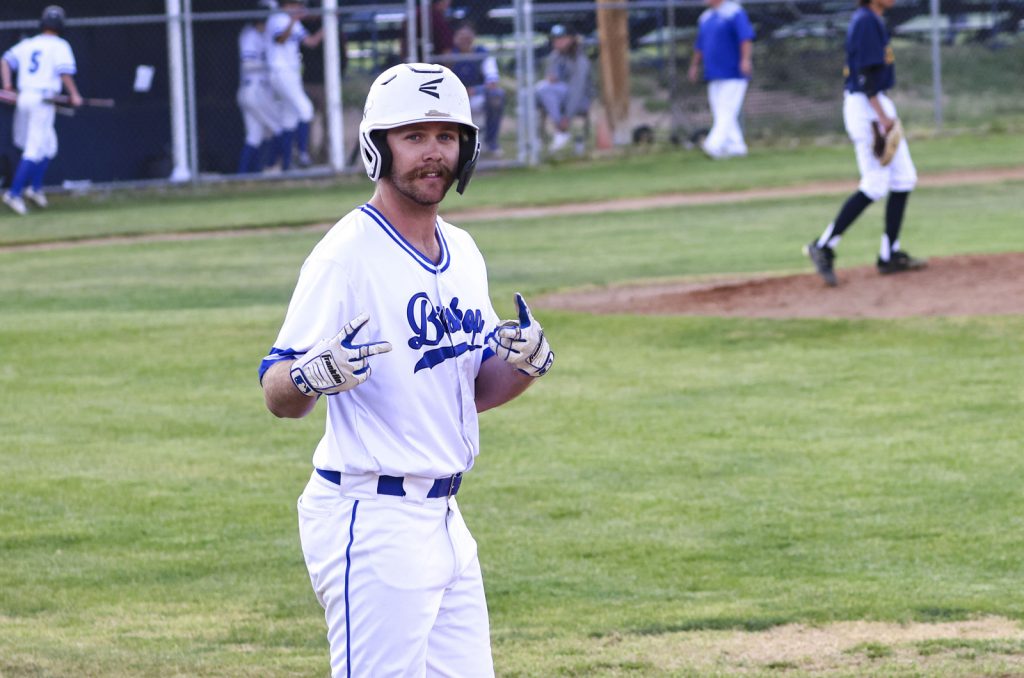 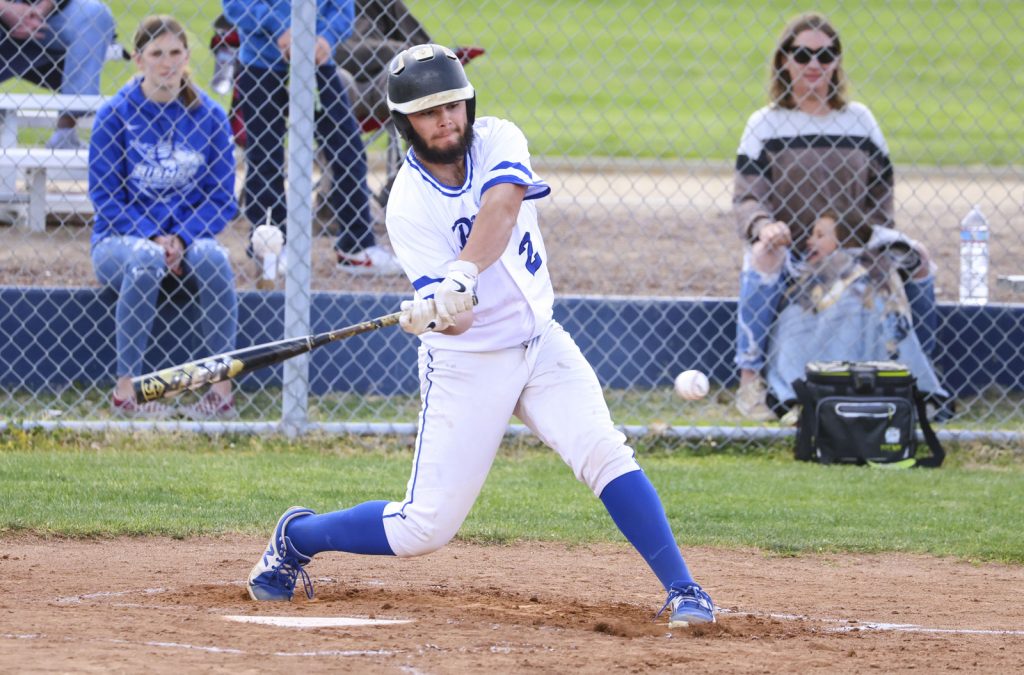 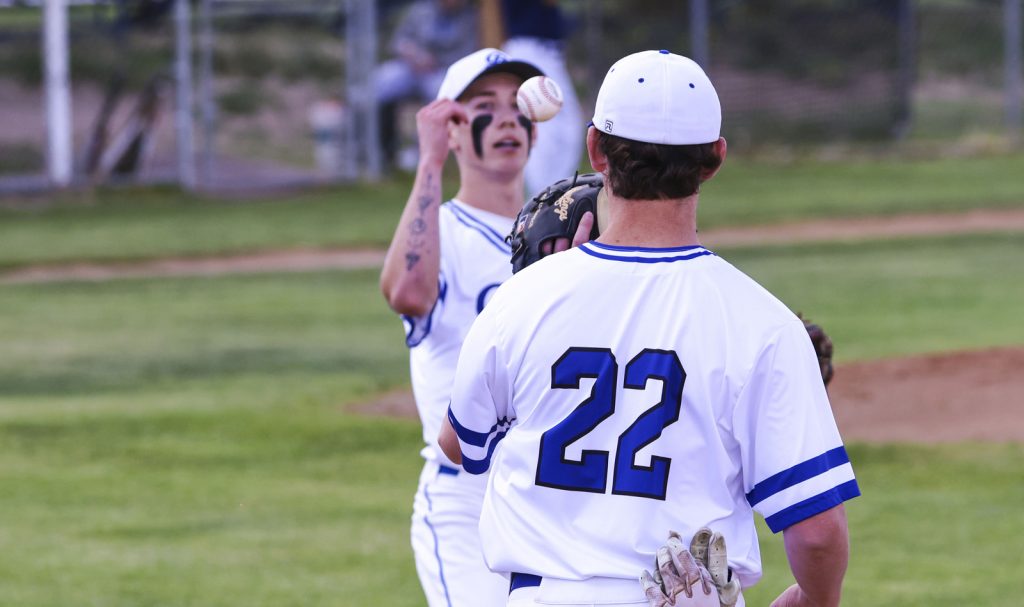 Our 7 – 0  undefeated-in-league Broncos head to take on the 1 – 4  Frazier Mountain Falcons on Friday. 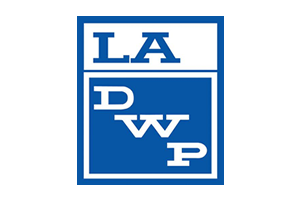 The City of Los Angeles filed a motion against the Great Basin Unified Air Pollution Control District to ensure the protection of significant cultural resources on the Owens Lake playa.

The motion is in response to a July 21, 2021, GBUAPCD  Order, and subsequent fining more than $500,000 in penalties, directing LADWP to begin dust mitigation on an artifact-dense cultural resource site known as Sibi Patsiata-wae-tü Cultural Resource located on the playa.

GBUAPCD’s violation of its own regulations, coupled with public objections  – including those from the Fort Independence Tribe of Paiute Indians, who stated that “the Tribe’s concerns, as a sovereign nation, were disenfranchised,” by the Order – forced LADWP to seek legal action.

LADWP’s motion requests that the California Superior Court immediately instruct GBUAPCD to rescind its order, which is both culturally insensitive and in legal violation of the Owens Lake 2014 Stipulated Judgement and 2016 State Implementation Plan.

Anaselmo Collins, LADWP Senior Asst. General Manager stated, “In issuing this Order, GBUAPCD broke a promise that it made to the public, regulators, LADWP, and the Fort Independence Tribe of Paiute Indians that it would regulate fairly, in accordance with scientific evidence, and with respect for culturally significant land. While we are disappointed this issue could not be resolved outside the courts, LADWP is dedicated to finding a solution to protect the Native American Cultural Resource Area at Owens Lake.”