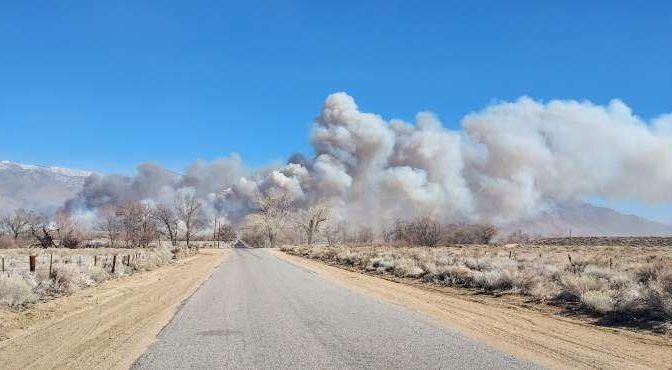 BREAKING NEWS – Can’t miss the big fire currently burning southeast of BIshop, about three miles east of Highway 395. The fire started south of the airport around 12:30 p.m. on Wednesday (2-16).

Numerous units responded from CalFire and Bishop Volunteer Fire, The fire maintained its southern movement along the banks of the Owens River. By 3:30 p.m. it was approaching Collins Road.

CalFirs Incident Commander Travis Lemm said all the local units available are on the scene. Three times more fire fighting units will arrive from other areas of California by this evening. With the heavy winds, aircraft might not be available today. In the Wintertime, their closet base of operations is over in Potterville. And in addition, CalFire said they’re not supposed to drop retardant in the river.

A CODE RED ALERT was received on area smart phones just after 1:30 p.m., advising of mandatory evacuations for the  Warms Springs area, although no structures were in the direct path of the fire. The White Mountain Research Center was evacuated.

The high winds are expected t last through the night. Fire officials said there is no threat to BIshop, Wilkerson, or Big Pine, but conditions could change.