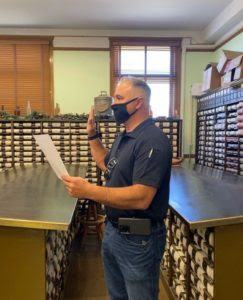 After a special meeting of the Inyo Couty Board of Supervisors to interview candidates for the office of Sheriff, The initial vote was 3 -2 in favor of Undersheriff Eric Pritchard over Stephanie Renie. After much debate, the board voted unanimously for Pritchard.  He was sworn in on January 20.
Four candidates applied for the position; one candidate declined the interview.
To receive a full four-year term, Sheriff Pritchard will have to run again in the June 7  California primary. He may face three other candidates including Renie, in addition to Joe Vedder, and Kelvin Johnson. All four have pulled nomination papers to appear on the ballot.
A formal declaration of candidacy occurs when forms, nomination signatures or filing fees are turned into the Inyo Couty Registrar of Voters. The deadline is March 11.
Candidates may add up to three words under their ballot name, to describe their occupation. Pritchard will be limited to using either the words “Sheriff” or” “Appointed Incumbent,” but may not use the term “Incumbent.”
The vacancy in Sheriff was created with the unexpected retirement of Sheriff Jeff Hollowell several months ago.