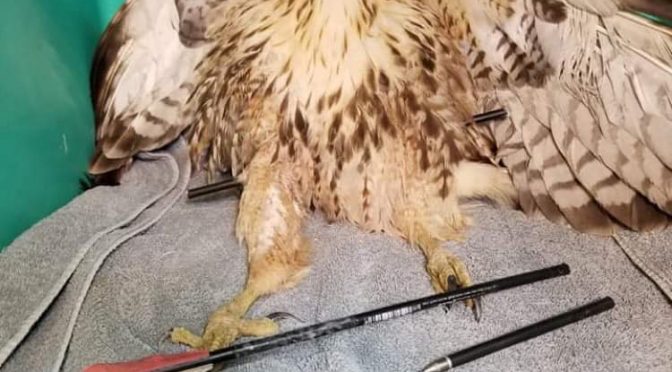 STORY UPDATED 1-21 @ 11:00 a.m.) CDFW Game Warden Shane Dishion reports that the agency was unable to trace the arrow inflicted on the hawk. But they do have a picture in case other illegal shooting of wildlife occurs.  Warden Dishon stated it was obviously intentional, due to the proximity needed for the shooter to hit the bird.

About a month ago, Wildcare Eastern Sierra staff received an urgent emergency call. Dave, an Edison workman, reported a hawk in the field west of the Bishop Golf Course. The large bird of prey had a long black arrow penetrating the lower part of its body.

The Red-tailed Hawk was spotted first in the field close to Sunland Road, then flutter-flew across the cropped alfalfa and over a shallow ditch into a thick cluster of trees. Wildcare assessed the situation: the bird was tangled in lower tree limbs by the protruding arrow ends; the ditch was a foot or more deep in water; the far bank was steep and muddy.

The bird’s location was blocked by barbed wire. Dave cut the wire along the road and Danielle pushed through the branches to the bird. Using a special cutting tool, Dave shortened the arrow ends so she was able to get through the tangle and fit the patient into a cage.

At the Center, the highly-stressed hawk was given time to relax; then the exam began.

Luckily, the arrow point was for shooting, not hunting. It first penetrated the hawk’s thigh muscle from the outside, passing through the skin, then muscle and exiting the skin on the other side of the thigh. The impact fractured the femur.

Staff didn’t know whether blood might spurt or heart or lungs might fail. Thankfully, no such symptoms appeared.

In the morning he was standing and alert! Hydration, pain control, thigh fracture immobilization were next. In the next day or so, it became apparent that his digestive and urogenital systems were functioning normally and soft foods were added to his treatment.

Almost fully recovered, the Red-tail will soon be able to be released back into the wild. California Dept. of Fish and Wildlife took possession of the arrow and have opened an investigation into its origin.