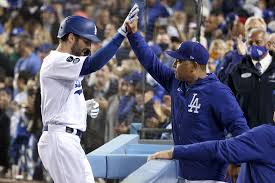 With the New Year and a fair amount of change already having taken place, it’s a good time to take a look at where the Dodgers 40-man roster stands as of early January. – Remembering pitchers and catchers show up for Arizona spring training in just seven weeks.

40-Man Roster As It Stands Now

Will this be the final roster by opening day? Absolutely not. With the MLB lockout in place, transactions are, of course, frozen. Once teams can get back to work, it’s easy to assume the Dodgers try to add a starting pitcher or two before or into spring training.

This very much changes depending on how the league and the team handle Trevor Bauer’s legal situation. He currently remains under investigation for allegations of sexual assault.

Edited  From DodgerNation – the leading fan site for the Los Angeles Dodgers. Join us LIVE on KBOV AM1320 – The Eastern Sierra’s Voice of the Los Angeles Dodgers for the last 35 years.  Each game – home and away with the Dodgers on Deck pre-game show, followed the greatest baseball broadcasters in the Major League.