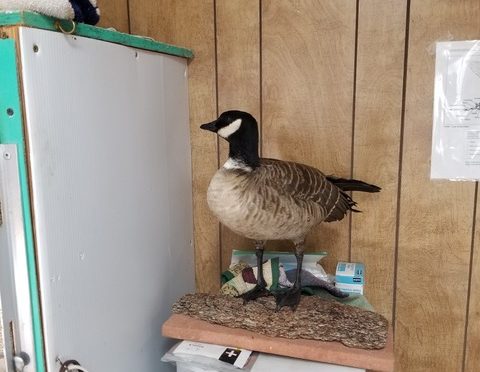 Three months ago Wildcare Eastern Sierra. received a phone call from a traveler on Highway 395, stopped at Coso Junction Rest Area.  On the large lawn area near the restrooms, he reported a single, black-and-white Goose. The description fit that of a Canada Goose.

Being a single goose, suggested that the bird was likely injured. During the next weeks, volunteers, Animal Services staff, CDFW wardens, and biologists stop by to assess or attempt to rescue the goose.

The goose appeared to be finding enough food and water to survive. He was less and less fearful of people but did fly away in short bursts from would-be rescuers, dogs, and vehicles. How he survived through nights filled with numerous predators–coyote, fox, mountain lion, owls–is not known.

On January 2, someone caught the goose and would drive it up to the Wildlife Center.

Upon arrival, the Center was surprised to see the small size of the rescued bird. Guide books soon showed it was an Aleutian Cackling Goose. Although somewhat similar in appearance to Canadian Geese, Cacklers are a different species.

The intake exam revealed a healthy, uninjured bird. Weight, feathers, feet – all were in good condition despite his long isolation. He was quite tame and comfortable with being handled. “We placed him in an outdoor, dirt-lined cage furnished with tules, grasses, small ponds of water,” said Center staff.

Normally, the Center releases flock birds to known flocks, but there were no known groups of Cacklers in the valley at this time. However, a Bishop resident, whose home adjourns a large non-frozen pond with nearby grasses and open land, and numerous waterbirds visit the pond year-round offered to have him released there.

The Cackler’s carrier was set on the grassy pond edge and the door opened. He exited in a relaxed manner. Taking his time, he neared the bank, looked around, and jumped quietly into the water.

He then paddled slowly along the pond edge. He found a spot where he could exit easily and checked it out.  All the while, he and his neighboring swimmers exchanged glances.

Suddenly, he stopped abruptly and began a joyful dance, splashing, diving, and ducking! It was as though he finally realized that he was in the water! That he could swim!  He came to a rest, paddled a few feet, again began to dance, and for the next half hour or so, continued to celebrate. At last, the Cackler hopped onto a sunny spot on the bank to rest, happily preening his feathers! We left him there; the homeowners promised to “keep an eye on him.”

The Center has received positive reports on his progress as the days have passed. A half-dozen or more Cackling Geese have welcomed him into their flock. They graze on dried grasses, swim together, fly off together to other ponds, return at intervals to the original release site, and live happily together.

Please join KIBS/KBOV in turning in your CRV recycling to Manor Market and having the proceeds earmarked toward the good work of the Wildcare Eastern Sierra.