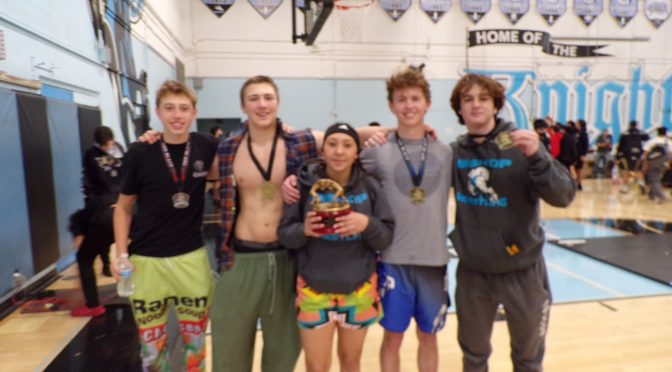 Last Saturday, the Bishop Bronco Wrestling Team competed in a tournament at Arroyo High School in El Monte, where they came home with a team trophy for 5th place.

Three Bronco wrestlers finished in first place in their weight class: Carson Schmidt at 132 pounds, Will Hennarty at 145 pounds, and Zayn Crockett at 195 pounds

John Drew at 126 pounds made it to the finals where he earned a second-place medal.

Head Coach Kodsart Denaro said, “I was very pleased with how well everyone on the team wrestled. The level of competition was perfect.”

Assistant Coach Mark Hodges said, “This is the first team trophy that the Broncos have brought home in many years. To finish in 5th place out of 18 teams with only five wrestlers is impressive! Their hard work in the wrestling room is paying off.”