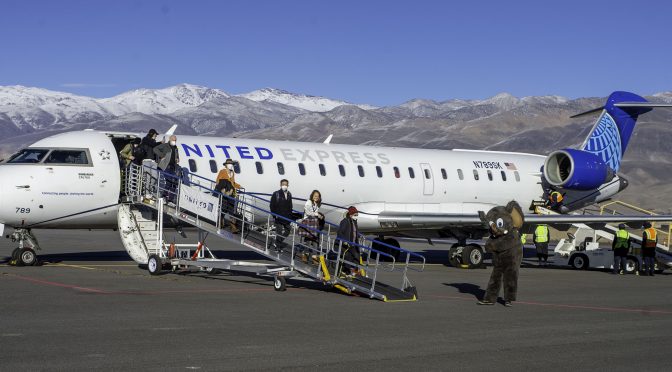 United Airlines landed its first planes at Bishop Airport (formally known as the Eastern Sierra Regional Airport) on Sunday (Dec 19) to a rousting welcome reception by county leaders, business groups, and the public.

The first plane arrived  – full – around 12:30 p.m. from Denver. The second plane arrived at 2:30 pm – also full – and served as the official “First Flight” from San Francisco, with greetings from Wolley, Mammoth Beanies were passed out on board, and Champaign shared by airport, county, FAA, and TSA officials.

Norm from Bishop is a second homeowner from the Bay Area. He tries to visit Bishop once a month but some winters, coming over the passes, he can’t make it. He was on the San Francisco flight and looks forward to many more regular trips.

Grandpa Sunberg welcomed his kids and grandkids on a United flight from Minnesota, through Denver. He got big hugs when the plane deboarded.

2nd District Inyo County Supervisor Jeff Griffiths was at the first meeting of Mono County, Town of Mammoth, City of Bishop, and Inyo County at a casual meeting at Rock Creek – could move flight operations to Bishop work to the benefit of the Eastern Sierra economy?

Western District Cheif of the FAA’s airport operations knew, when he first met the group from the Eastern Sierra, they were serious. He helps push the project with the FAA.

United is offering a 10% discount to locals flying out during off-peak hours. And with United connections through Denver, LAX, and San Francisco, the world can be reached from Bishop. (Booking Hint:  The 10% discount applies to one’s entire round trip, beyond their three hubs. And reportedly, fares from Bishop are the same or less as flying out of Reno or LAX.)

(Photos Courtesy of KIBS’ Ken Harrison and  Gary Young, and Michael Chacanaca from the Inyo Register.)