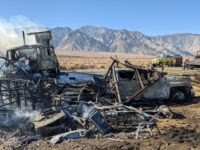 On Wednesday (11-24) in the late morning, a truck driver in a 2011 International semi-truck/trailer, loaded with cardboard, was traveling northbound along US-395 just south of Cactus Flats Road near Olancha, CA.

A small brush fire resulted from the crash, which was extinguished by firefighter personnel. US-395 was closed to all traffic for an extended period of time due to the semi truck blocking all lanes of traffic.

All parties were able to exit their vehicles and only minor injuries were reported. This crash is still under investigation by Bishop CHP. 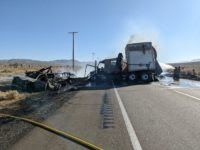 Due to the traffic back up, a subsequent two-car crash occurred around 2:30 p.m., which didn’t help the six hour slow moving traffic through the scene. One KIBS/KBOV listener reported it took them one hour to drive 10 miles approaching Olancha.