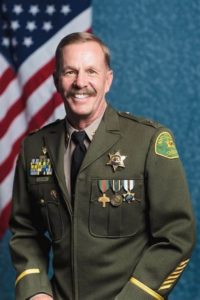 Hollowell was elected into office in  2018 against fellow Inyo County Deputy Josh Nicholson. Hollowell was the Undersheriff prior to the election. Sheriff Hollowell  will have served  just over two years of his four-year term.

In February of this year,  Hollowell filed a $20 million lawsuit against the county, in connection with a claimed illegal release of confidential records, libel and slander, caused by the actions of one county employees, and two former county employees.

At the time of filing the lawsuit, Hollowell, through his attorney, stated he would not be commenting further. There is no new information on how the lawsuit is proceeding.

Hollowell also came under fire over two of his deputies use of force trying to arrest George Barlow, III in a well publicized incident. A review by Inyo County District Attorney Tom Hardy cleared the Department and its deputies of any wrong doing.

KIBS/KBOV will update this story as more details become available.