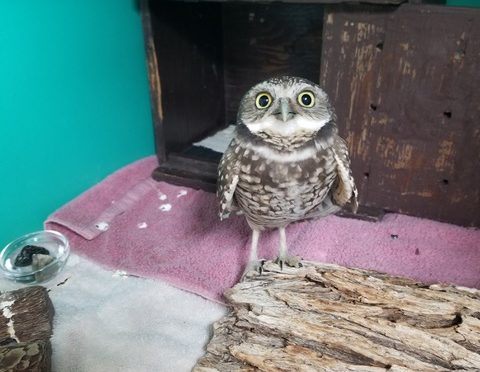 Last week, as dusk was falling, Wildcare Eastern Sierra received an emergency call from a James Lander, who works in Death Valley.

A small owl had run smack into the glass door of the Stovepipe Wells Hotel. Acting quickly, James gently picked up the stunned bird and held it against his body for warmth and security. Nearby employees helped locate a cardboard box to safely contain the owl and James and his daughter found a dark quiet place for the container while he made his call to Wildcare.

After ensuring that the rescuers were taken proper care of the injured animal, Lander kindly offered to drive the patient to Lone Pine, to be received by volunteer Jon, owner of Elevations in Lone Pine. Because of the late hour, the owl would stay warm and safe overnight at the store. Wildlife biologist Russel Kokx would drive it to Keoughs early in the morning.

The young Death Valley owl showed slight signs of impact trauma. But was hydrated and given special medication. These Owls become more active as evening approaches and our little owl did the same.

Soon eating his small rodent dinner and exploring his hospital cage. By the next morning he was so alert and active that he was moved him to a large outdoor cage to eat, explore and take short flights. Time to go home!

Ron and Nancy Overholtz picked up the bird and headed south to hand him back to Kokx, who took off toward Stovepipe Wells.

Together with the Lander family, they took the owl’s travel box to the nearby desert brush area and placed it on the ground. The owl waited quietly until the sky became dark. Smoothly and silently the bird lifted off and flew about 15 feet. The Burrowing Owl touched down without sound and disappeared into the dusky darkness.

An adult Burrowing Owl, one of the smallest North American owls. As the human population spreads into the open space habitat, Burrowing Owl numbers decrease or even disappear, making them a species of special concern.

Please join KIBS/KBOV in recycling your CRV cans and bottles at Manor Market, requesting the proceeds be donated to Wildcare Eastern Sierra.