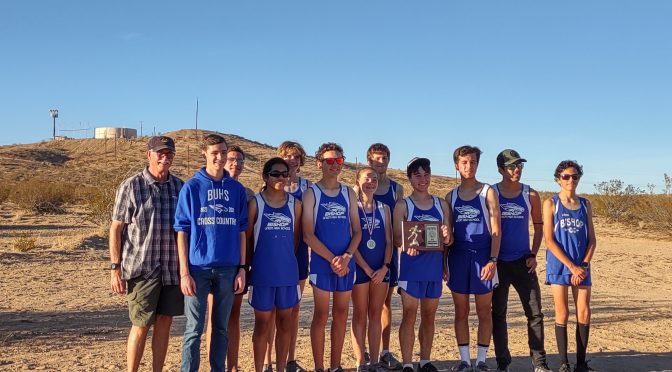 Congratulations to The Bishop Union Boy’s Cross-Country team for finishing the 2021 season undefeated and being crowned the High Desert League Champions.
The league finals were held at Boron and run across a very steep and rocky 5K course. The boy’s team was also without their team captain and best runner Diego Honda due to an injury the day before the meet.
This meant the team had to run just that much harder to secure the victory.
Kyle Schaniel finished in second place in a time of 22:44,
Alexander Adkins finished third in a time of 23:27,
Ezra Spoonhunter finished fourth in a time of 23:42,
Denzel Gomez, finished in 10th with a time of 25:21,
Steven Veenker, finished 11th in a time of 25:47,
Alex Eide finished in 34th with a time of 31:54,
Josh Wilson finished in 40th with a time of 34:05.
Elias Downard finished in 43rd with a time of 36:50.
Congratulations also to sophomore Ashley Fitt for being crowned the High Desert League Champion capping an undefeated season with a strong performance over the difficult Boron course.
She won the girls varsity race in a time of 25:14,  one minute and fifty seconds ahead of the second place runner.
The Boy’s team and Ashley Fitt will travel to Woodward Park in Fresno next Thursday to compete in the Central Section Divisional Championships and pursue an opportunity to qualify for the CIF State Meet held on Saturday, November 28th at Woodward Park, Fresno.
(Photo: Courtesy of Coach Michael Walsh)