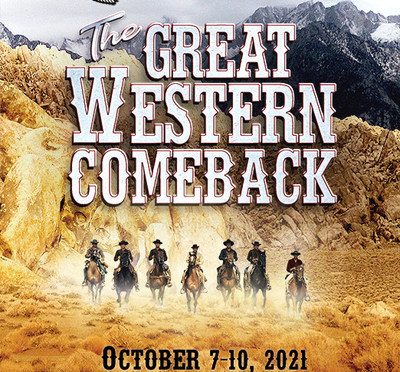 Celebrities and invited guests of this year’s will include: Patrick Wayne, Claude Jarman Jr., Robert Carradine, Bruce Boxleitner, Darby Hinton, and Cheryl Rogers-Barnett. A few highlights added this year are tapings of “A Word on Westerns with Rob Word, and screenings of Quentin Tarantino’s Django Unchained and Once Upon a Time… In Hollywood.

Over the course of the weekend, 21 films will be presented with even more film location tours this year. This is the only festival in the world where fans can actually tour film locations.

The Sunrise Tour with cowboy poet, Larry Maurice is not to be missed. This year, the festival is including some more recent films with a theme of The Great Western Comeback, as well as the westerns shot amidst the boulders, canyons, and rocky outcroppings of the Alabama Hills that have set the scene for over 400 action-packed films.

In Spainhower Park on Friday and Saturday from 9-6 and Sunday from 9-5, “Art in the Park” will anchor the north end of Main Street. A community fair with artisan crafts, food booths, and local artists, this year the fair will also feature Mariachi Original de Mexico on Saturday from 5-7:00pm.

Back by popular demand will be the rousing stunt show coordinated by Diamond Farnsworth and John Moio.

Other returning crowd favorites on Sunday include the Cowboy Church on the Anchor Ranch, the VFW Pancake Breakfast on Saturday and Sunday. The  Main Street Parade will be announced by KIBS’ News Director and long-time Film Festival attendee, Ken Harrison, following with the closing campfire in Spainhower Park, Sunday evening at 7:30pm hosted by cowboy poet, Larry Maurice.

Tickets and Info at www.lonepinefilmfest.com.