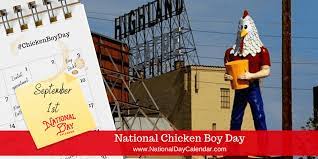 As part of our daily news, the National Day Of . . .  has become a big hit with listeners Monday – Friday.  Each day offers a usually humorous look at an officially proclaimed day.

On September 1, National Chicken Boy Day honored the birthday of an interesting statue in California. I have a special connection to the statue, too good to not post.

Chicken Boy stands 22 feet tall and holds a bucket of chicken. The fiberglass statue of a boy with a chicken head can now be seen along Route 66. But he formally stood for almost 25 years atop the  Chicken Boy Restaurant on Broadway Street in L.A. (Part of old Route 66.)

Also known as the “Statue of Liberty of Los Angeles,” he joins other notable highway food characters, such as Big Boy, Ronald McDonald, and Muffler Man.

The iconic statue remained in place at the restaurant until the owner died in 1984. At that time, Chicken Boy was given to Los Angeles art director, Amy Inouye. For a time, the statue remained cooped up in storage. However, over 20 years later Chicken Boy flew the coop. He now graces the property of Inouye’s design firm.

The entire community came together to make the restoration of Chicken Boy possible. His restoration and display are partly due to the catalog of items Inouye offered for purchase Chicken Boy-themed items for fans to enjoy.

Tune in every Monday – Friday during our 2nd news segment during our hourlong newscasts at 7am, 12 noon AND 5:00PM for the National Day Of . . .