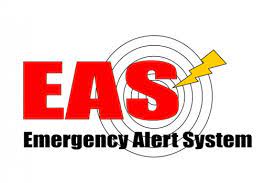 FEMA and the FCC will conduct a nationwide test of the Emergency Alert System (EAS) between 2:00 p.m. – 2:15 p.m. TV and radio broadcast will be interrupted for a few seconds. However cell phones will go crazy with a loud tone, vibration, and a text message advising of the test.

Suddenlink advises that after the five – ten second test, one may need to reboot their TV equipment to continue watching their program. Does that mean the government may have taken control of your personal TV?

Some Historical Stuff: Established in the 1950s Cold War, the Emergency Broadcast System (EBS) was available to the president to advise of incoming nukes from Russia, or other national emergencies. Fortunately the approved words of “We interrupt this program. This is a national emergency. The President of the United States or his designated representative will appear shortly over the Emergency Broadcast System,” were never activated nationally.

Radio DJ’s, while on the air, had to know where a sealed, little, brown envelope was located in the studio at all times. A new envelope arrived weekly. Upon activation of the EBS system, when larger radio stations would have taken over a local station’s broadcast, a DJ would have been asked to open the envelope and read the “Secret Code” word to government or military officials, to prove they were not enemy agents broadcasting Anti-American propaganda.

The antiquated system was disbanded in 1997 and replaced with the EAS, which can be used by numerous government agencies to advise of regional emergencies such as weather, earthquakes, or flooding.

If you have an older radio from that era, home or car, you’ll notice a little triangle on the AM radio dial. That was the dial’s location of your EBS radio station. This Rambler’s case, it was KFI AM 640 which at the time, could reach most of Southern California  with 50,000 watts daytime power, and the entire west coast at night.