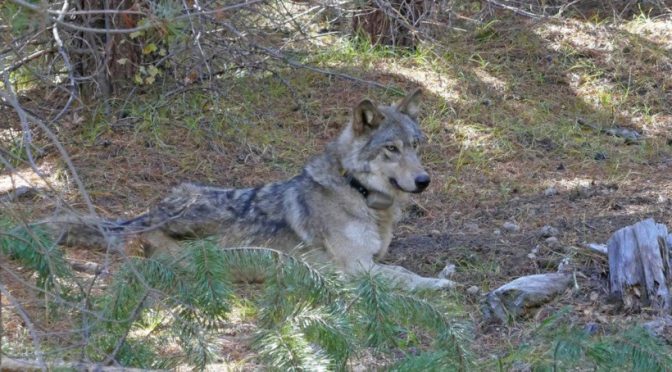 A young, collared gray wolf, who wondered into Northern California from Oregon in January, and disappeared after traveling down the state, may have re-appeared.

Labeled as OR-93, the endangered specie was tracked down Northern California, through Northern Mono County, over through Yosemite, into the San Joaquin Valley, and west to San Luis Obispo County. On April 5 his monitor went dark. It was assumed the monitor failed, or unfortunalty, maybe the wolf met a tragic end.

To the chagrin of California Department of Fish and Wildlife, I dubbed him “Wolfie”, because his picture was so darn cute. CDFW encourages the public to not assign human-type names to wildlife,

Wolfie may have resurfaced around the end of May.  A rancher in southwest Kern County captured, from a remote camera,  a video of what CDFW officials think may be Wolfie. Unfortunalty CDFW wasn’t made aware of the images until last week. (The rancher’s camera only gets download once every three months)

CDFW is trying to find DNA evidence near the ranch’s water trough, where the video camera was located. Flyovers in the area are attempting to reactivate the wolf’s transponder collar.

Wolfie was known to successfully travel across three major freeways to reach the coastal areas of San Luis Obispo County –  Hwy. 99, I-5, and U.S. Hwy. 101.

While there are a few known gray wolves populations in California, only Wolfie has been documented as now a permanent resident of the Golden State.  Up until April 5, Wolfie traveled over 935 air miles from his birthplace, and estimated to have traveled about 16 miles a day. Gray wolves provide little risk to humans.