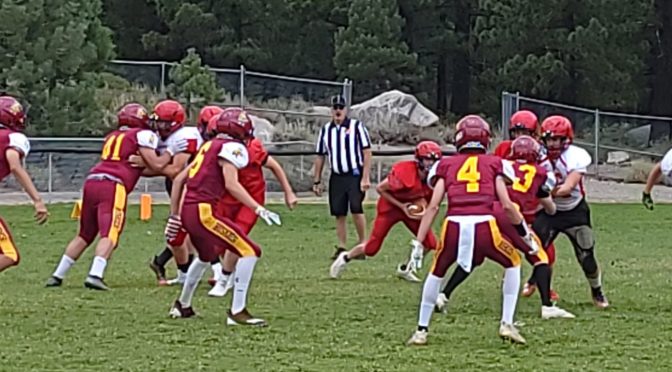 The Tonopah High School Football Program has come out of the gates in record numbers. Head Coach Duffy Otteson has concluded his teams first week of practice with 30 kids starting the 3-hour-day practice week which included a Friday two-a-day.

“In my 13 years, this the biggest turn out we have ever had,” Coach Otteson said. By the time assistant Coach Bobby Murray released the team, he had 30 hungry boys in line waiting to chow down.

Like previous first week of Tonopah Muckers football practice, it is truly unique to watch these young men struggle through drills, soreness, fatigue and heat, only to dig deep by weeks end and find that extra something in themselves these young men never thought they had. A hard week of practice would conclude on Saturday with a bus ride to Mammoth to scrimmage against the Huskies.

Both JV &Varsity took there turns at the line of scrimmage on both offense and defense.   While everyone on both Tonopah and Mammoth saw their share of playing time, its was the coaches who finally got glimpses of what is their respective team’s potential. 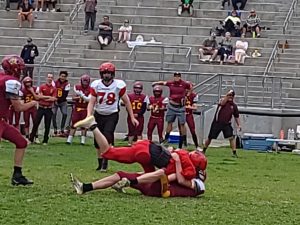 Touchdowns were scored, mistakes were made, and the field saw its share of yellow flags, but by the end, sportsmanship was shown on both sidelines – kids helped each other up and shook hands by the end of the scrimmage.

These two teams run it back at it again on Friday, August 27at   7 p.m. on the season premiere of the “KIBS 107 FM High School Football game of the week” 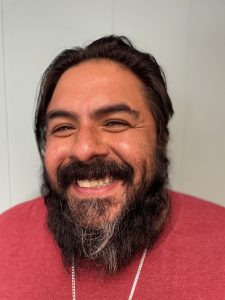 Adam Gonzalez will be broadcasting the play-by-play action  for this game, LIVE on 100.7 FM in Mammoth and 101.7 FM in Tonopah, NV.