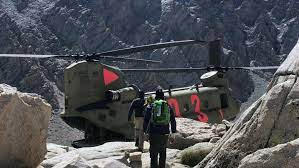 Three hikers who spent a night stranded on Mount Whitney are now safe thanks to a California Army National Guard aircrew.

This rescue took place late last week, but we were just given the details.

A CH-47 Chinook helicopter from Cal Guard’s Army Aviation Support Facility in Stockton was flown in to airlift the hikers.  But the large helicopter could not land and had to hover near the final camp above 12,600 ft.

The rescue crew says the terrain was steep and rocky forcing what is known as a pinnacle landing. That is when only the back wheels of the helicopter touch down and the rear ramp is lowered, while the rest of the copter hovers over the ground.

“Its like trying to ride a unicycle and juggling at the same time,” said one of the pilots.

“We played that game of precise positioning for a couple minutes to even find a spot where we could safely get both wheels on the ground without a rock punching a hole in the aircraft or popping a tire,” said U.S. Army Chief Warrant Officer 3 Aaron Mello.

“When you’re on the pinnacle, you’re working really hard to not let the wind shove you off when it gusts,” Mello said. “Every limb you have is gainfully employed in making small adjustments to keep you where you need to be.”

With the hikers, the search and rescue team, and helicopter’s crew members all safely back on board, the helicopter headed to Bishop Airport where they dropped off the team and hikers.