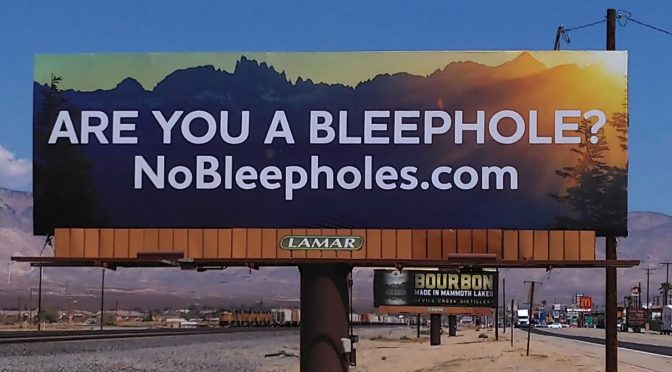 Mammoth Lakes Tourism (MLT) saw a big pushback on their newest campaign slogan. So much so, that other than the billboard on Highway 14 down in Mojave, the campaign was quickly flushed.

“Don’t be a Bleephole” was supposed welcome visitors to Mammoth Lakes, but bring attention to good visitor behavior; picking up after dogs, drowning out campfires, and leaving no trace.

A website was set up for the campaign at nobleepholes.com, with links through VisitMammoth.com.

KIBS/KBOV had an phone interview with the tourism folks pre-scheduled for Monday, August 2. Monday came and went. No phone call.

By August 2, MLT had already read the writing on the wall. People hated it – the campaign, the song, and the banners on websites. One social media site reportedly had over 300 posters objecting.

In the promotional Don’t Be A Bleephole song, “bleep” was also used over the S and F word lyrics.

“We need to swallow our pride, extend our hands and say, “’Hey we’re in this together’” Corless added. “We have to stop being the bleepholes.”

Links to the website now direct viewers to Mammoth Lakes Tourism’s “Hug What You Love campaign.”

Reportedly, the idea was first presented to the MLT Board on July 7. The promotion was described as the pet project of MLT Director John Urdi. $23,000 was spent on the campaign.

Urdi published a letter on August 3, explaining the thought process after hearing from residents about the disrespectfulness of many visitors. Urdi admitted MLT made a mistake with the campaign idea.