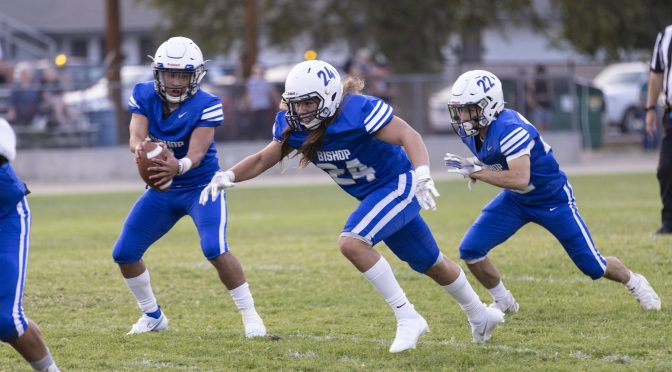 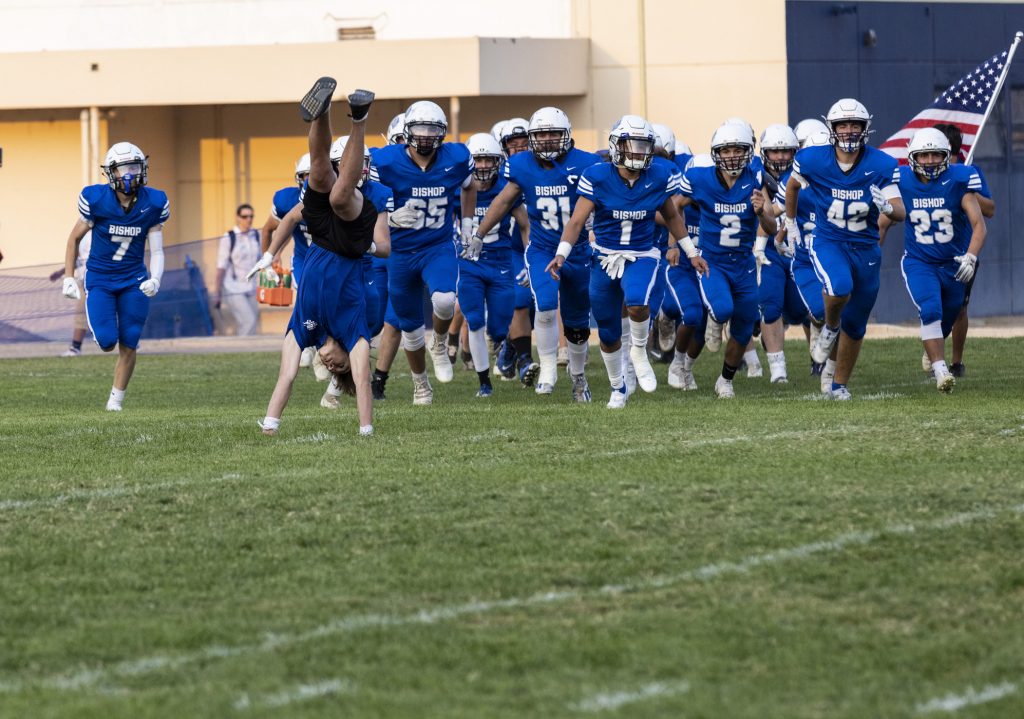 After nearly two years of no high school football in Bishop, the Broncos took the field against a familiar foe. The Lindsay Cardinals arrived in the Eastern Sierra looking for revenge after losing 22-16 in the CIF Central Section Division 6 semifinals in 2019. 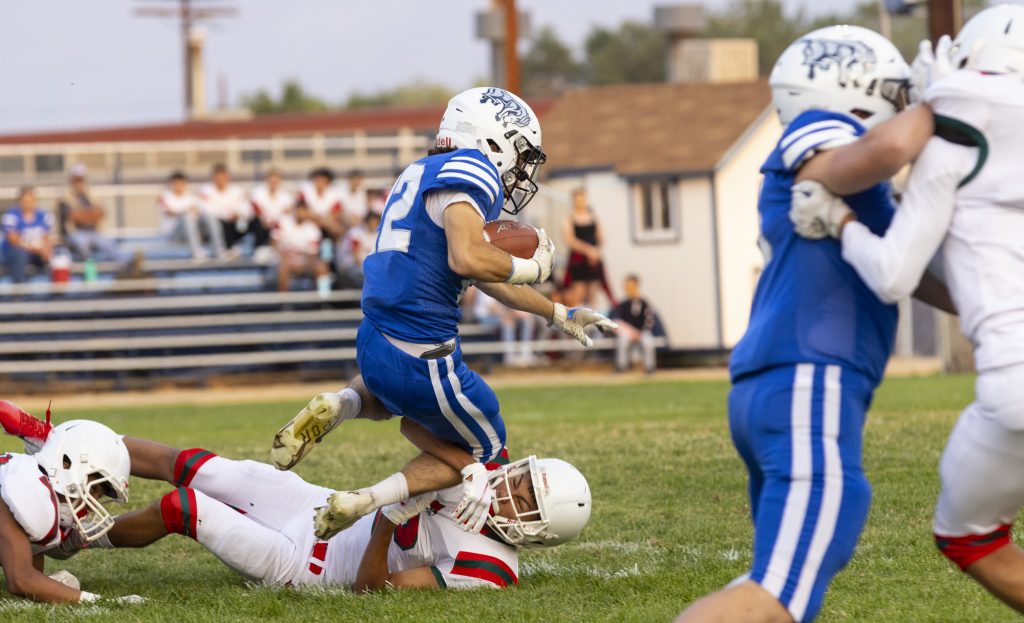 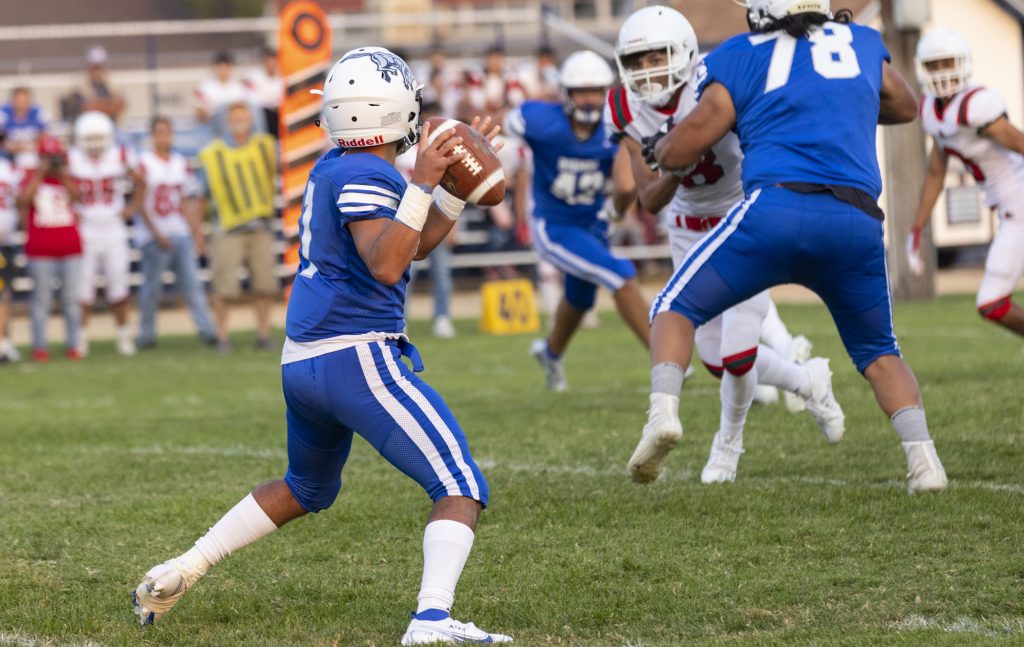 A few days before the game, sixth year head coach, Arnie Palu reflected back on the semifinal game against the Cardinals saying, “That semifinal game against Lindsay was without a doubt the toughest game we had in 2019. However, we made necessary adjustments after falling down at the half and we were able to come away with a victory.” 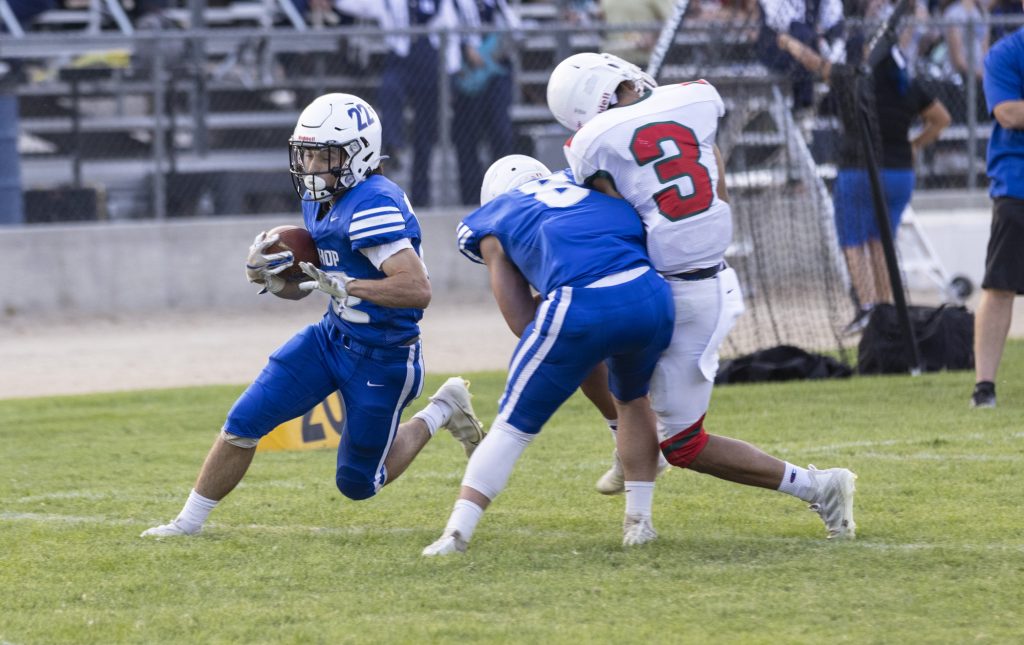 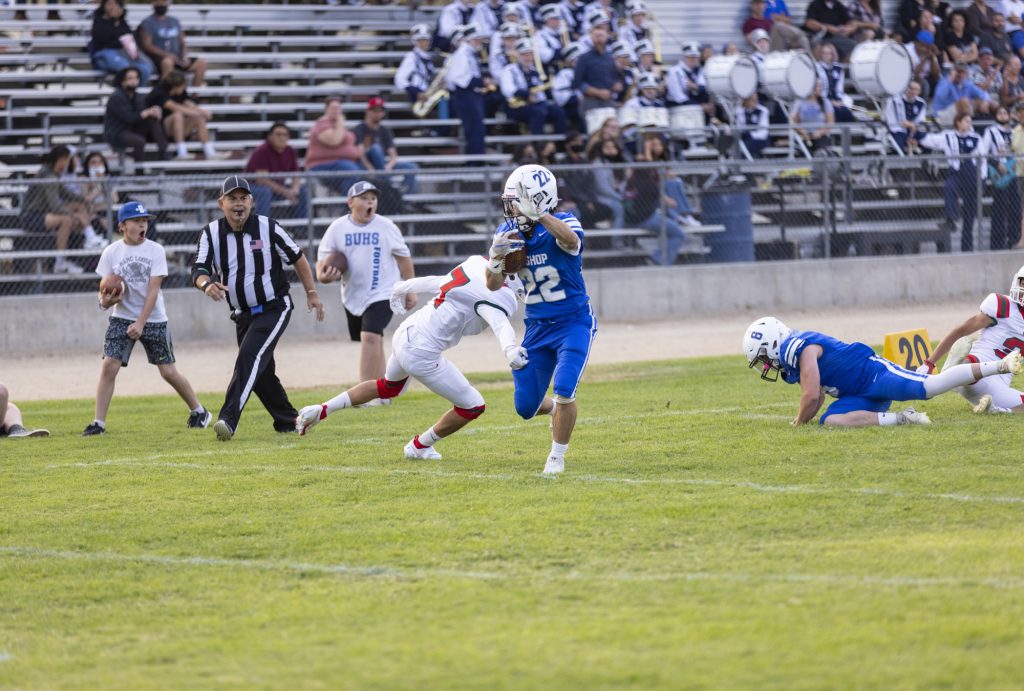 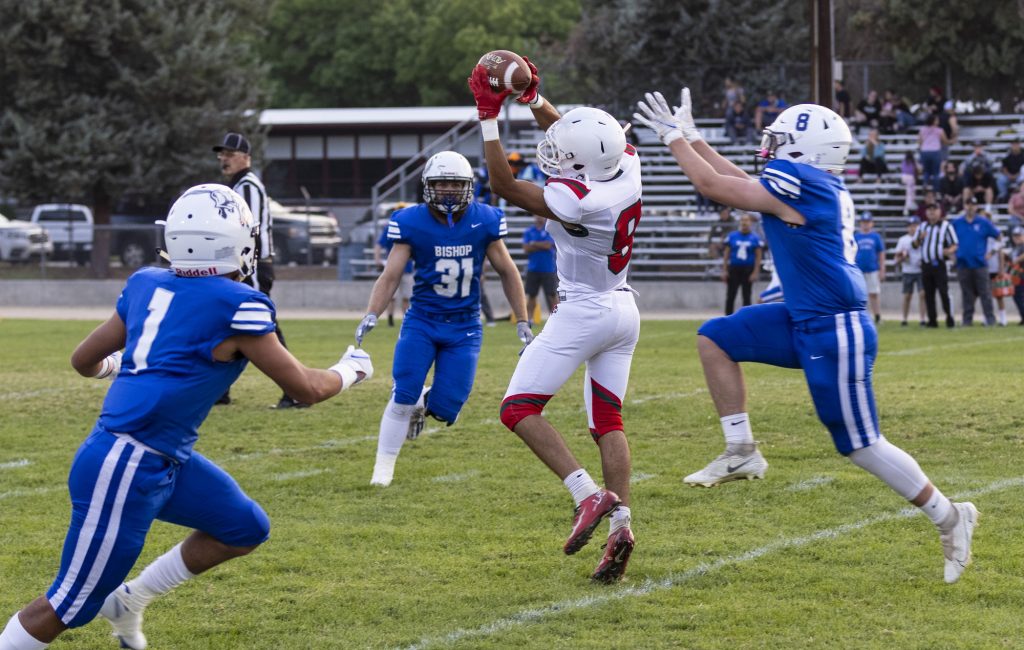 However, the Broncos didn’t have much trouble this time around against Lindsay. From the start, Bishop was able to establish the run and scored on their first drive of the season. Senior running back, Zach Mojarro was the star of the night and got his first touchdown after he ran the ball to the outside for a five-yard touchdown. 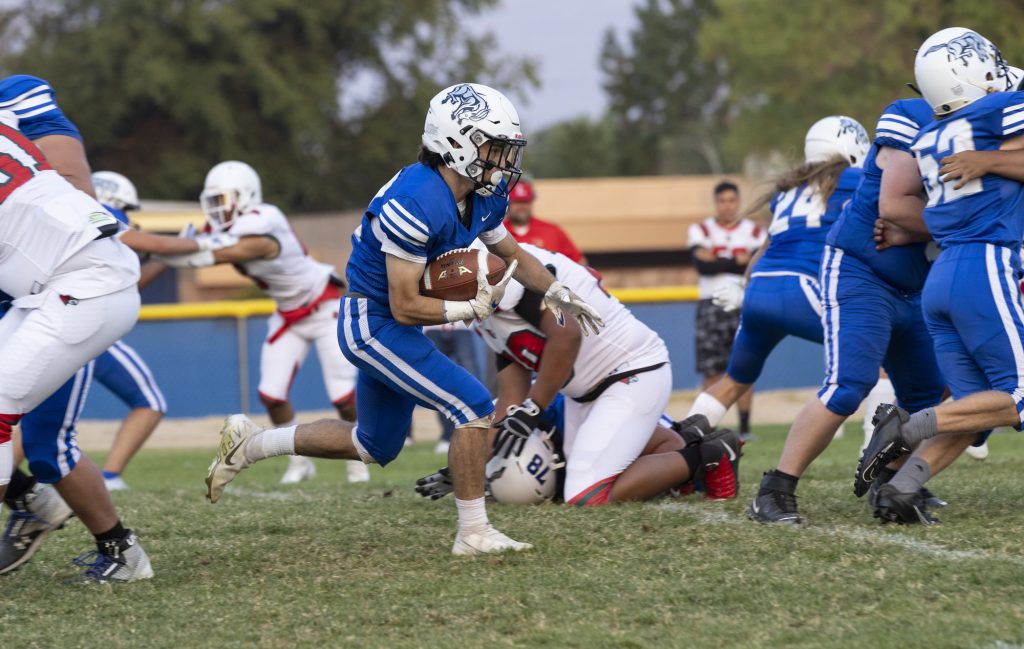 The Broncos took the lead 6-0 and then missed the point after attempt. 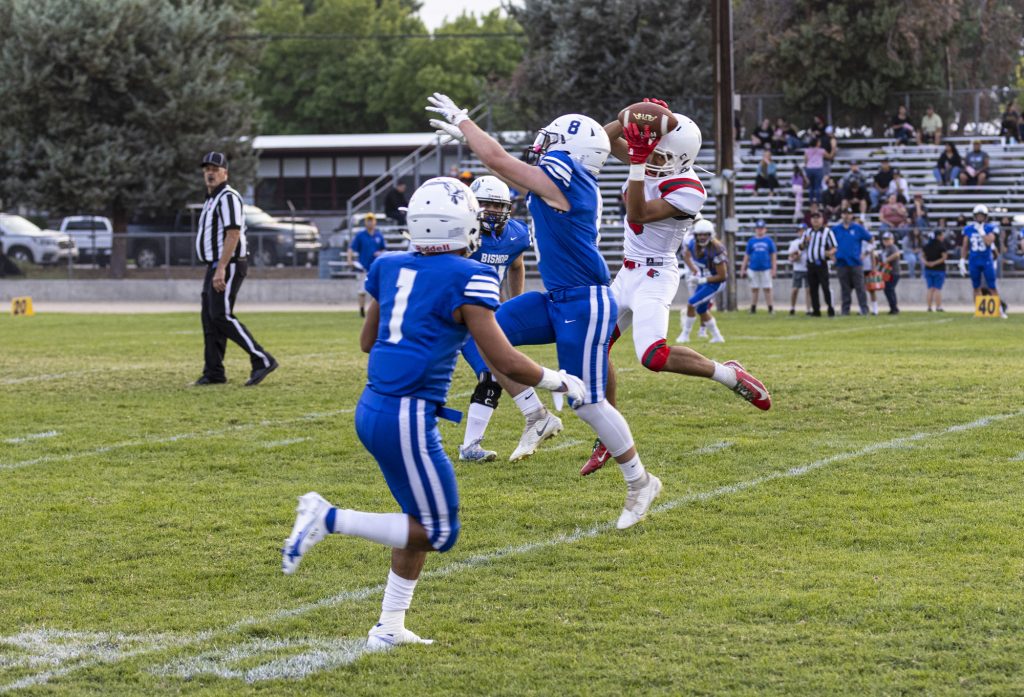 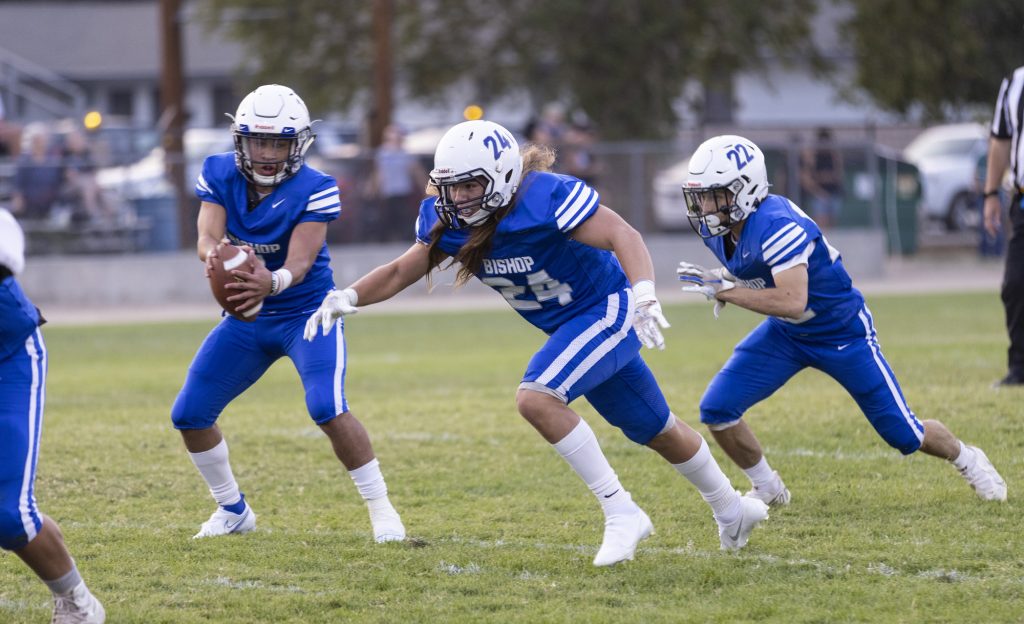 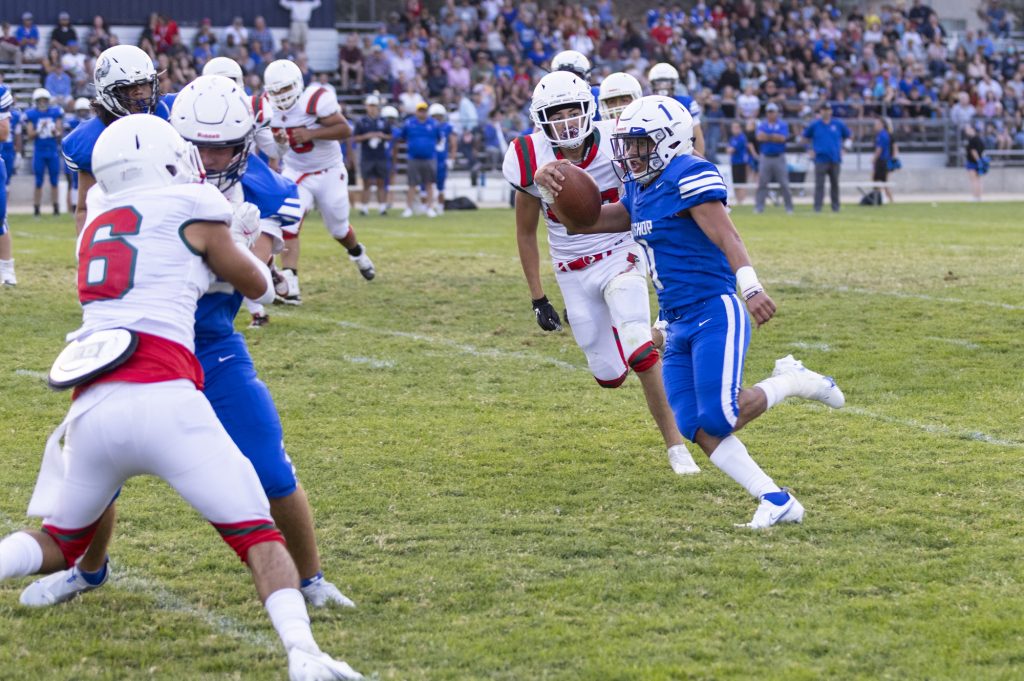 Turnovers were a big problem for both teams on the night, but more so for Lindsay, who gave the ball away seven times on the night. The first turnover came when the snap went over the head of Cardinals quarterback, Samual Reyes. Bishop recovered the ball and picked up where they left off with another Zach Mojarro run to the outside. Bishop led 13-0 after the first quarter.

The Broncos weren’t as dominant in the second quarter, but still were able to score another touchdown thanks to another Mojarro run. Bishop took a 19-0 lead going into the half. 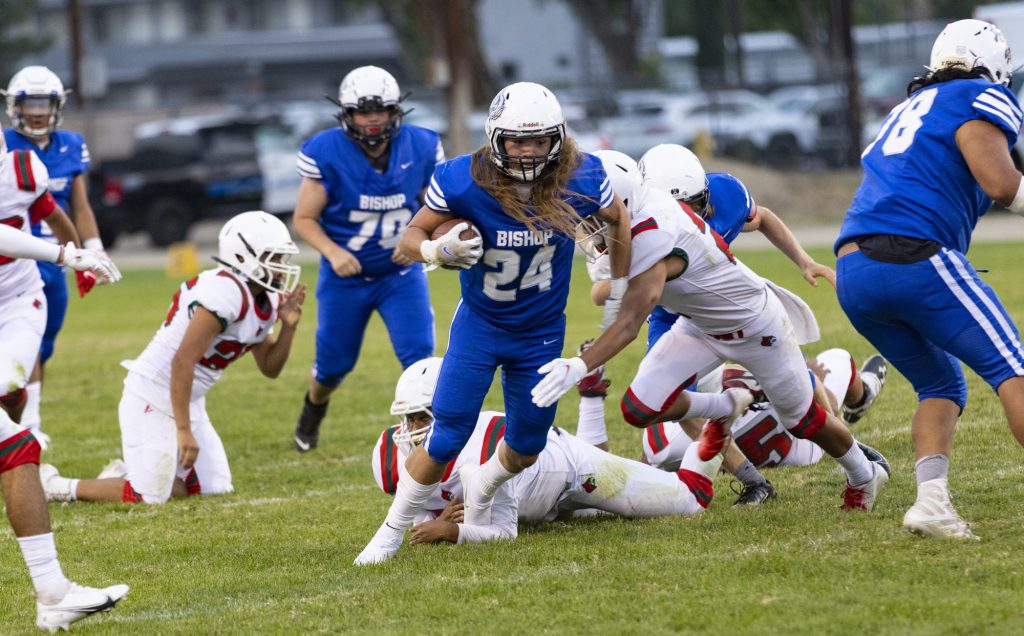 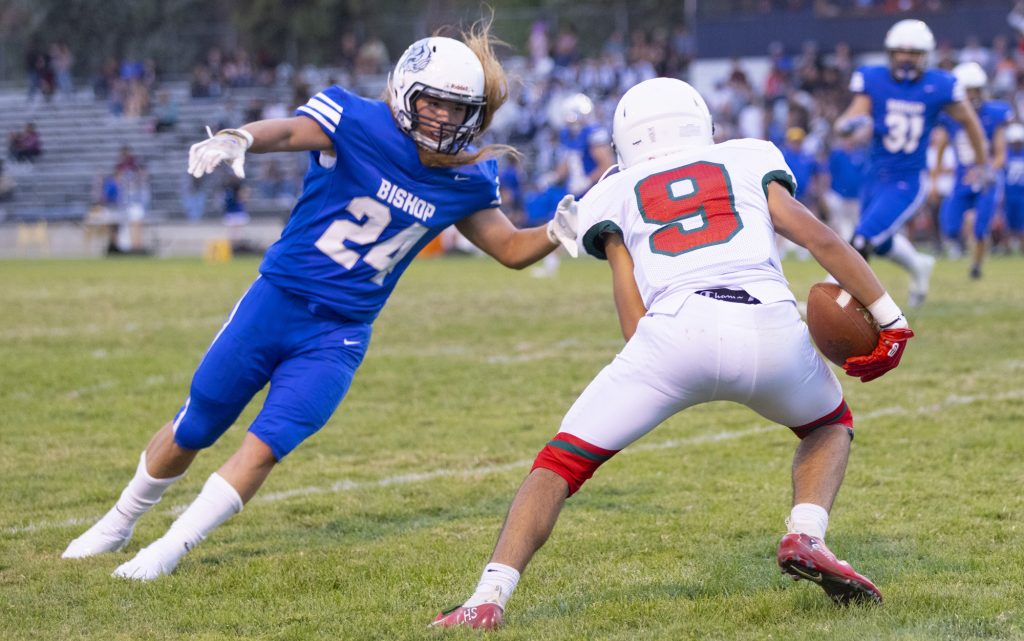 Bishop struggled at the beginning of the second half. They turned the ball over multiple times during the first portion of the second half. By the midway point of the third quarter, the Cardinals were able to pull within three points after senior quarterback, Jakob Redmond threw a pick six to Lindsay safety, Leonardo Duran. The score was 19-16 and the home crowd began to get a little bit nervous. However, Bishop responded well and fed their star running back, Zach Mojarro who was able to cruise up field for another touchdown to give the Broncos a bit of breathing room. The score after the touchdown was 25-16. 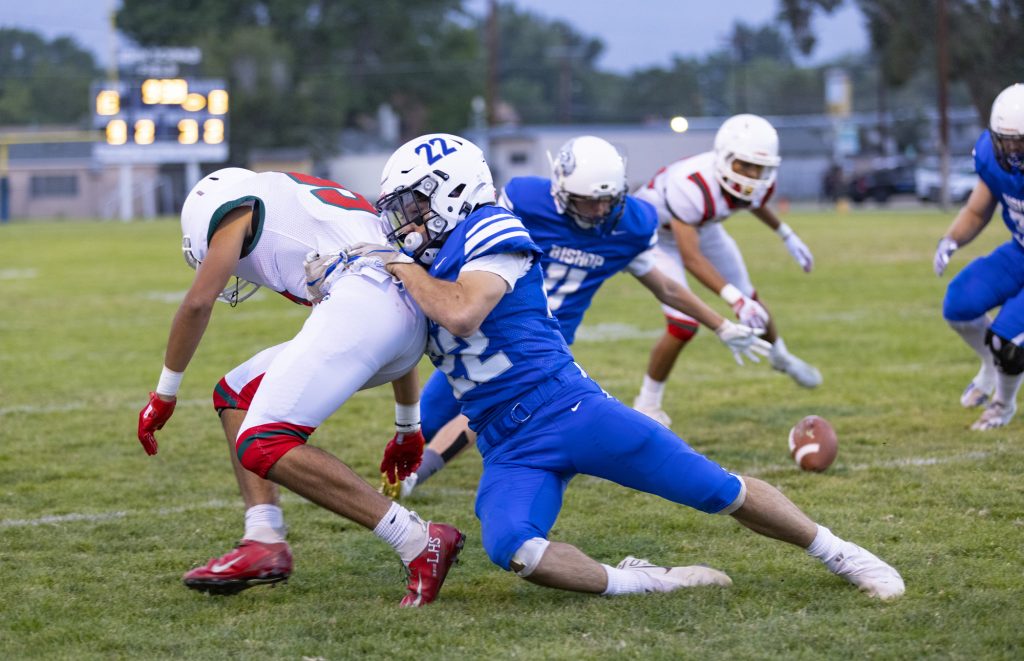 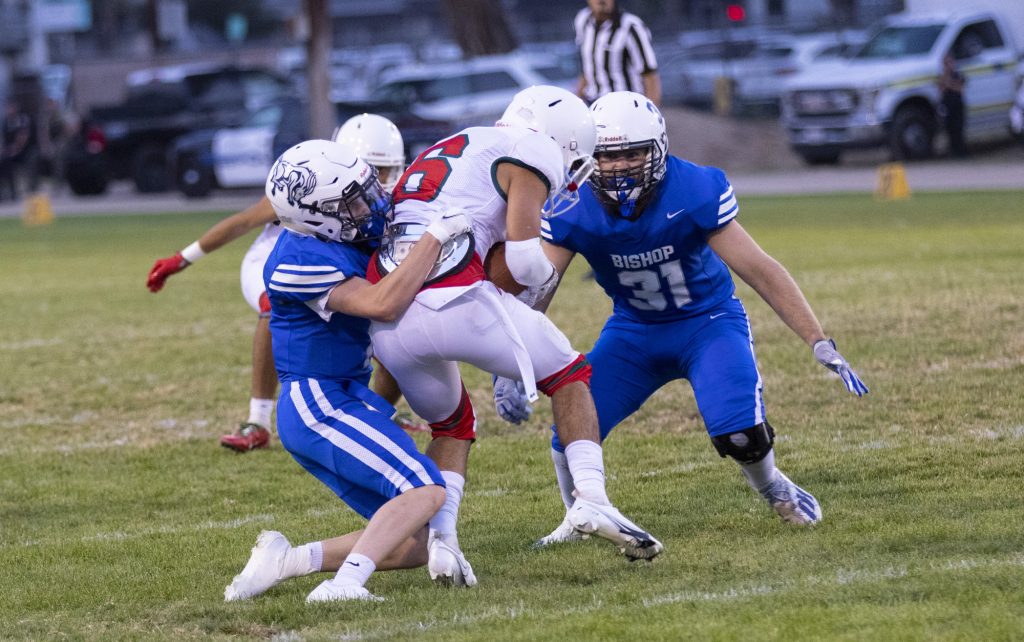 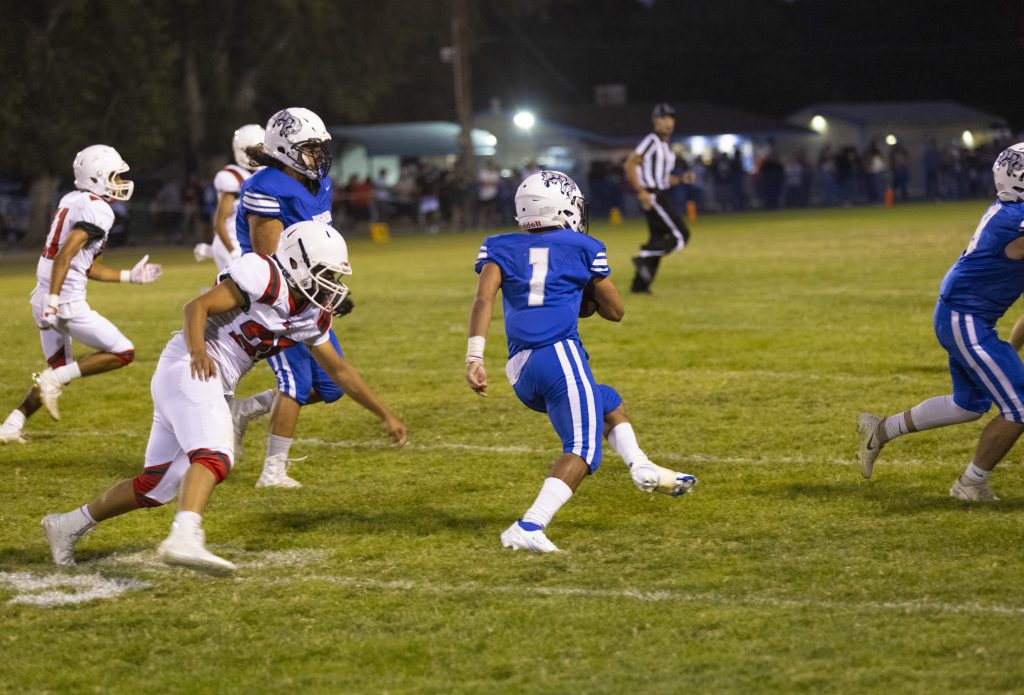 Bishop took over in the fourth quarter and dominated the rest of the affair. Zach Mojarro got two more touchdowns and Jakob Redmond scored off of a quarterback keeper. Mojarro’s second touchdown of the fourth quarter came late when Redmond found the running back unmarked on the far side of the endzone for a twenty-yard receiving touchdown. 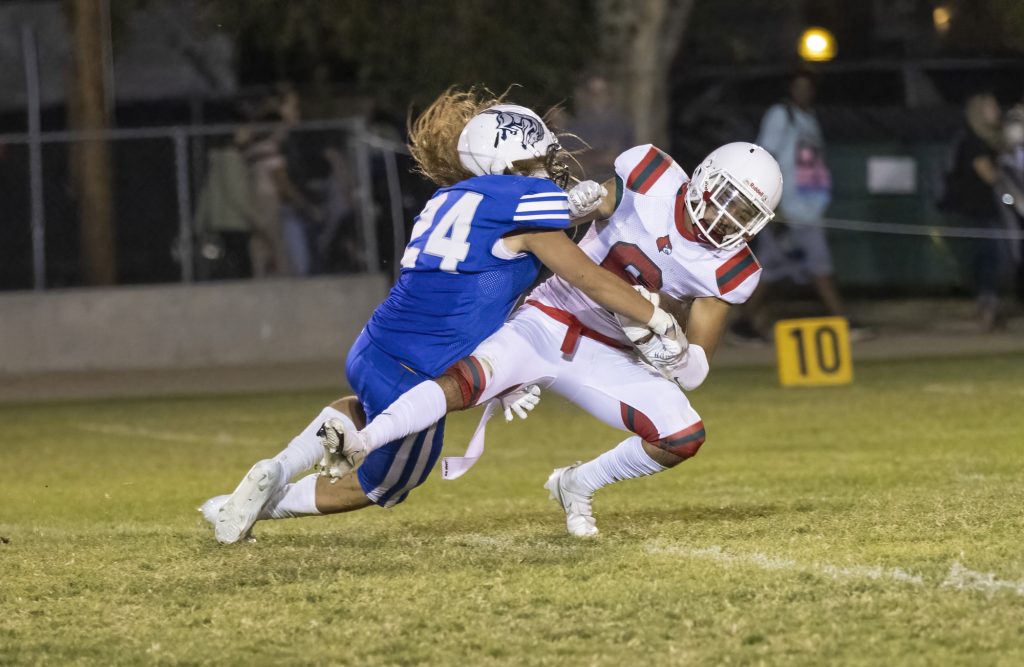 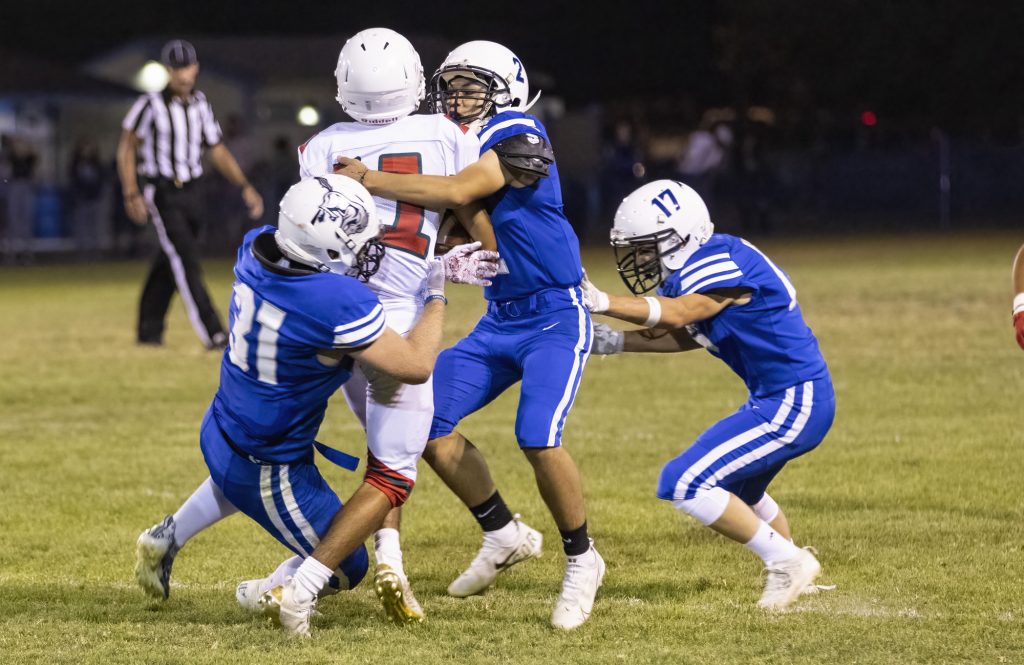 Overall, it was a solid performance for the Broncos. Jakob Redmond was able to make some good plays with his feet, while Zach Mojarro was electric the entire night and is essentially the reason why the Broncos won the game on Friday. Other players who stood out included Cain Omohundro, who was able to make a few good plays both defensively and offensively. The star of the night on defense was defensive lineman Reese Dondero, who plugged up the middle of the trenches and did an effective job of generating pressure.

Individual stats for the Broncos