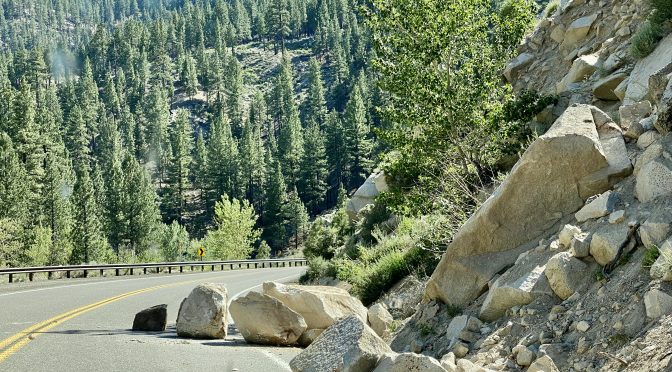 Almost one week later, the earthquake swarm continues after last Thursday’s (7-8-21) 6.0 centered in Walker, but not as intense.

Over the weekend, a larger area of California and Nevada received almost 100 shakers, most under 3.0. The quake swarm ranged from Dardanelle – north of Sonora in Tuolumne County, up to Markleeville in Alpine County, east through Walker, and out east to Smith Vally, NV.

No damage has been reported in the recent swarm of quakes.

One of our listeners, Rhonda, from Bishop, was the 2nd car heading south on Highway 395 into Walker Canyon as the 6.0 hit.  She said she thought, at first, something was wrong with her car, until she saw the large boulders resting in the roadway.

“The shaking lasted about 20 seconds,” said Rhonda, in an exclusive interview on KIBS/KBOV. 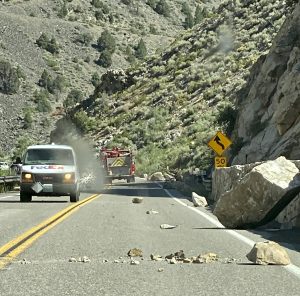 “If one of those boulders had hit a car, it would have been disastrous,” said Rhonda. She continue slowly down Highway 395 through Walker Canyon, negotiating around the fallen boulders. It was about seven or eight minutes before she saw an emergency response vehicle .

Rhonda was the 2nd person to call 911 right  after the shaking stopped. She was advised to let 911 know if their were any injuries.

Since Rhonda’s background is in nursing, after regaining her composure, she was ready to render aid to any other motorist stranded on the highway. Fortunately her services was not needed. 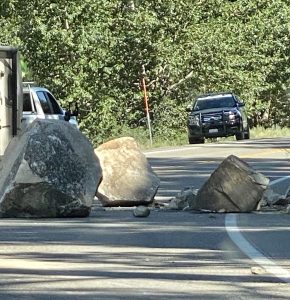 When she finally left the canyon, about 30 cars and trucks were pulled over to the northbound side of the road, not willing to enter the canyon highway. CHP had the road closed northbound in Bridgeport.