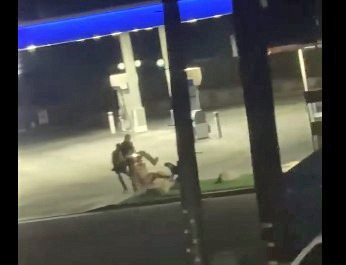 (UPDATED 7-27-21 @ 8 a.m.)   Inyo County Sheriff’s Office released the two involved deputy’s bodycams video, this before the investigation is complete and the facts are fully known. The video can be viewed on YouTube here. (WARNING – VIDEO IS GRAPHIC  – NOT FOR CHILDREN)

ICSO also announced the charges that have been filed against the suspect: Obstruction/Resisting Officers , Threatening Criminal Intent, Assault with a Deadly Weapon, Violation of Parole – all are felonies, an additional misdemeanor of Battery on a Police Officer.

On Saturday, July 24, shortly after 2:00 a.m. Inyo County Sheriff’s Office received a report of a domestic violence restraining order violation on Tu Su Lane.  Upon arrival of the deputies, neither the reporting party nor the suspect could be located.

While looking in the area, the deputies noticed a male subject across the street at the Chevron station, which was closed; the subject was agitated and yelling.

When the first deputy contacted the subject  – identified as 32 year George Barlow III, of BIshop, Barlow asked, “Can I kill you too?”

Barlow then charged the deputy with his pit bull closely behind him.  The deputy continually ordered Barlow to stop charging.  When Barlow came within 10 feet, the deputy deployed his Taser.  Due to the heavy clothing Barlow was wearing, the Taser had no effect on Barlow.  Barlow removed his heavy sweater.

A second deputy responded to the gas station Chevron after Barlow refused to follow commands. He deployed his Taser, striking Barlow in the upper abdomen.  This caused Barlow to fall to the ground.  Before the deputies were able to handcuff him, Barlow sat up and removed the Taser darts.

Deputies transitioned to a baton and after striking him, Barlow grabbed the baton and attempted to get it away from the deputy.

During the incident, Barlow commanded his dog to attack the deputies.  Both deputies received dog bites before a deputy was able to shoot the dog.  Barlow was pepper sprayed which caused him to release his grasp on the baton and charge at the deputies.

Verbal commands were continued to be given to Barlow which he ignored, crossing the street into an apartment complex.  The Sheriff’s Office deployed its canine, which was able to subdue Barlow until an additional officer from the Bishop Police Department arrived. They were able to handcuff Barlow.  Deputies immediately provided medical aid until an ambulance responded to medically clear Barlow before transport.

Barlow was transported to a hospital outside of the area, where reportedly he is on life support. He has yet to be charged with a potential of numerous crime including attempted murder of a police officer which could carry a life sentence without parole.

The ICSO has not confirmed if the initial call’s address had anything to do with Barlow. (ED. NOTE – The above was confirmed on 7-28 – the initial call had nothing to do with the arrestee, nor did the address of the call. A deputy was unable to located the reporting party at a specific address near Highway 395 on Tu Su Lane, regarding a domestic restraining order violation, requesting an officer. When the deputy could not find the reporting party, he then heard the suspect yelling across the street at the closed gas station.)

The Sheriff’s Office has seen, and is reviewing the social media videos capturing this incident. After a thorough investigation of this incident, it will be referred to the District Attorney for review. The public is encouraged to contact the Inyo County Sheriff’s Office if you have any additional information.