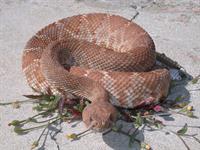 Spring is here and with it brings warm weather and hot, dry conditions in many areas of the Eastern Sierra. California. Encounters with snakes are more likely as these elusive animals become more active this time of year.

Rattlesnakes may be found in diverse habitats, They can be attracted to areas around homes with heavy brush or vegetation, under wood piles where rodents may hide, as well as well-manicured landscapes to bask in the sun.

Rattlesnakes are not generally aggressive, unless provoked or threatened, and will likely retreat if given space.

Some good pints provided by California Dept. of Fish & Wildlife;

The California Poison Control System notes that the chances of being bitten are small compared to the risk of other environmental injuries. The potential of encountering a rattlesnake should not deter anyone from venturing outdoors.