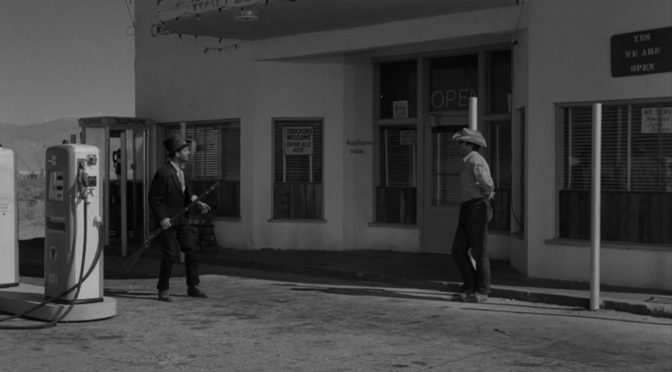 Each year, on May 11,  is National Twilight Zone Day; a day dedicated to remembering and viewing the iconic series that aired on CBS for five seasons – 1959 to 1964.

But did you know that two episodes were filmed right here in the Owens Valley?  Season 2 – Episodes 23 & 24.

A Hundreds Yards Over the Rim aired on April 7, 1961, starring Cliff Robertson, Edward Platte (Get Smart), and John Astin (The Addams Family).

Christian Horn (Robertson) is member of an 1847 wagon train headed west. They are 1500 miles from St. Louis and are now in the desert. Many in the wagon train are ready to turn back but Chris wants everyone to persevere. His son has had a fever for days and Chris goes off looking for water, only 100 yards or so from the others and suddenly finds himself in the present day 1961 at  Roy’s Airflite Cafe (the actual name of the location used). He can’t quite bring himself to believe what he sees or where he is but those he meets believe he’s a man from the past. The trip in time does have one positive outcome.

Filmed in Olancha on Highway 395, the old vacant building still stands today, across the street from an abandon  76 gas station, near the recently shuttered Ranch Motel and Cabins. Reportedly the interior Cafe shots are the actual former Cafe, not on a Hollywood set. I’d love to see the inside of the building to confirm. (Hint Hint to owner Chris)

In The Rip Van Winkle Caper, which aired on April 21, 1961, four thieves steal $1 million in gold bullion in a train robbery and hide the money in a mountainside cave (in the rocks of the Alabama Hills in Lone Pine). The four plan to go into suspended animation for approximately 100 years when they hope to awaken as extremely rich men with their heist long forgotten. When they awaken,  one of them, has his eye on getting as much of the gold for himself as he possibly can. The world they have awakened in isn’t exactly what they had hoped for.

Both episodes, filmed back to back, on  location in the Owens Valley (same crew – different directors and cast) centered on the protagonist encountering people from his future.

Historical Footnote: This area in Olancha was to be known as the town of Grant. The owner of the Ranch Motel, an air strip  stop over retreat for the Hollywood outdoorsmen, tried unsuccessfully to name his patch of high desert as Grant. He got a highway sign (still placed), but not the important a post office designation.