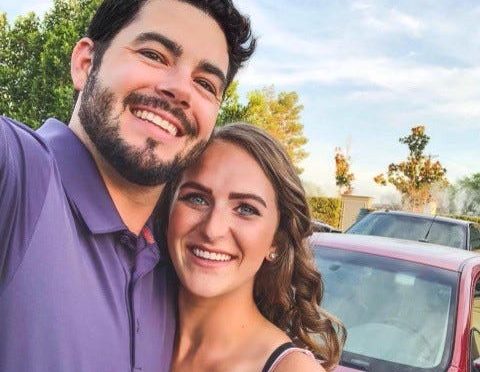 Inyo County Sheriffs Office reports that a forensic autopsy shows Alexander Lofgren died from his injuries while hiking. There is no foul play suspected.

(Updated details from Facebook, GoFund Me, and previous reports by KIBS/KBOV News)

The brother of rescued hiker Emily Henkel posted on Facebook a GoFundMe page has been set up on behalf of the couple and the families.

Henkle’s boyfriend, Alexander Lofgren, both of Tucson, succumbed to his injuries before he could be rescued by Inyo County Search and Rescue on Friday. This after Thursday’s aerial rescuers were unable to repel close enough to the couple to assist, Henkle suffered a severe foot injury.

After the couple didn’t return on their planned date, Inyo County Sheriff’s Office organized a multi-day search by numerous agencies,  both by air and on the ground, checking every pull out along Hwy. 190 – their planned route,

Their vehicle was found around 11:00 a.m. Thursday on Gold Valley Road. A note stated they had two flat tires and were heading to Mormon Point (where they would find the nearest road) with a three-day supply of water.

The missing couple was found about two hours later, in Death Valley National Park, near Willow Creek, on a very steep ledge.

The GoFundMe page was created by Chris Henkel. After explaining how the couple’s Subaru became stranded with two flat tires in a remote region of Death Valley, Henkel and Lofgren “…tried to make it through Willow Creek Canyon to the nearest road for help.”

No other details have yet been released by the family and the case is still under investigation by the Inyo County Sheriff’s Office.

As of posting time today, the GoFundMe page, “Support for Emily Henkel and Alex Lofgren’s family,” has raised $30,553 towards their $100,000 goal, given by 368 contributors, many wishing to remain anonymous.