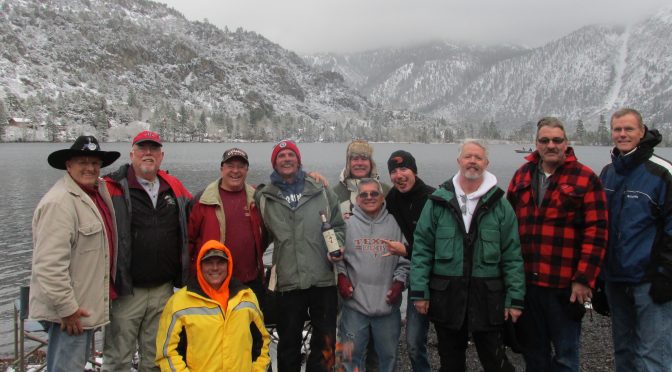 Most traditional Merry Fishmas Opening Day lakes are ice free! And reports are that it has been too warm recently to support traditional (and safe) ice fishing in the higher lakes. A lot of holdover fish are expected to be hungry come official start time – 5:08 a.m. April 24.

Mammoth Lakes –  The Basin road will not reopen in time for the opener. The road will be blocked at Tamarack Lodge. However Twin Lakes will have some exposed water for walk-in anglers.

While the lakes are officially opened, the Inyo National Forest reports not to expect the Basin roads and campgrounds to open until the week before Memorial Day,.

Bishop Creek – Hwy. 168 up to Sabrina is opened and plowed. (UPDATED 4-21) Sabrina is mostly frozen over and water level low – below the boat launch. The gate to South Lake is not opened as of today,  although the road appears plowed)  North Lake road will not be plowed and won’t be opened for weeks. Intake II is open and full of fish.

(UPDATED 4-23) Caltrans reports Tioga Pass will not open on time. The road is clear but repairs are needed to guard rails and plowing drainage channels. Bishop Creek is open, as of March 1.

Lundy should be opened. Virginia Lakes may still have ice, at least the east lake will. Road may not be plowed all the way.

Bridgeport – Lower twin is ice free. Upper Twin should have some open waters, but not be plowed all the way. The Reservoir is wide open but low lake levels.