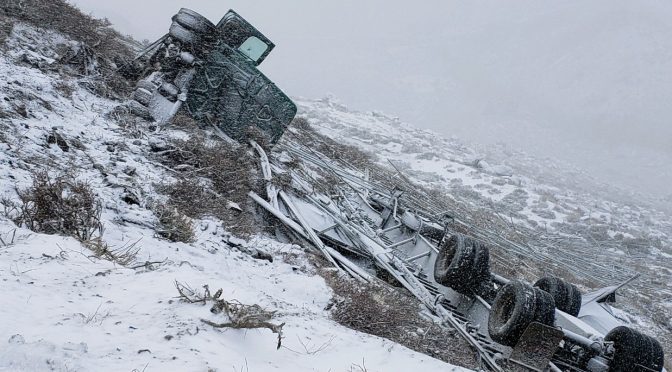 Tuesday, April 13, a big rig truck towing a loaded flatbed trailer was traveling southbound on US-395 just south of Conway Summit. A witness reported that the big rig was traveling at a high rate of speed before the crash.

The roadway was covered with snow, and R-1 chain conditions were in effect. The big rig did not have chains installed.   The driver of the big rig attempted to negotiate the left curve at Mono Lake Vista Point when the it began to lose traction.

The driver was unable to safely negotiate the turn and the vehicle slid off of the west roadway edge, where it collided with a guardrail.  The vehicle continued through the guardrail, down the steep embankment, and rolled over onto its left side.  The truck went through approximately 200 feet of guardrail and 100 feet down the embankment.