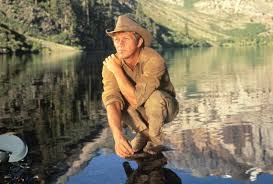 Movies in the Movies is a DVD Collection of films shot in Mono County, housed at the June Lake Library, and available to check out through any Mono County Library branch.

This is the film that started the idea of collecting films shot in Mono County. In 1965, while on vacation, my dad recognized the craft services trucks – rigs that provide lighting equipment, costumes, food – parked off the road to Hot Creek (He was a fireman on the MGM lot prior to WWII) . Although we never saw scenes being filmed, we were told it was a Steve McQueen picture entitled Nevada Smith. In 2012, myself and two librarians were sitting around the June Lake Library and thought, “Wouldn’t it be neat to have a collection of DVD’s shot in Mono County?”  Between the three of us, we came up with seven films, including Nevada Smith, that we knew were shot on location.

I went home, did some research, and over the years we’ve have a search list of 76 films believed to have been shot in Mono County. The June Lake Library has a collection of 26 DVD’s.

In 1966, Paramount Pictures released Nevada Smith. Nevada Smith’s (Steve McQueen) parents are killed when he was a young boy. He spends years learning the ways of bad guys, eventually tracking down the killers, only to find redemption in the end.

The first 1/3 of the film is shot at Hot Creek, and other Eastern Sierras locations including the Convict Lake, Alabama Hills, Cerro Gordo, and the Laws Station. – KIBS’ News Director Ken Harrison has been the volunteer curator of the DVD collection as a member of the June Lake Historical Society and June Lake Friends of the Library. Updated information is welcomed.