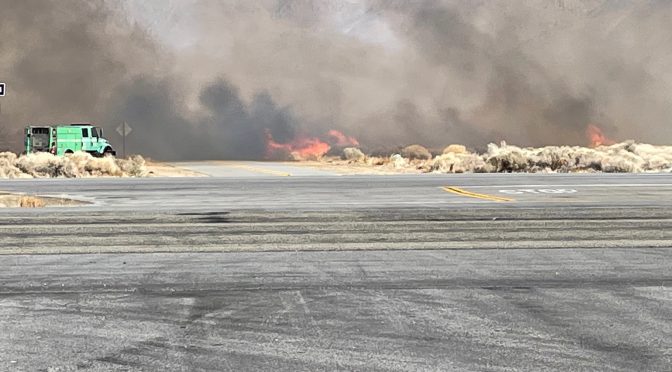 A controlled burn on Highway 395 between Big Pine and Independence was going just fine until an unpredicted wind came up around 12:00 p.m., pushing the fire northward at a quicker than expected rate. Additional units needed to be called in.

Reportedly, around 12:30 p.m. winds in Big Pine, blowing out of the south, were reported averaging 20 MPH.  The fire’s residual smoke was pushed all the way north to the Chalfant Valley., and could be smelled by many in the Bishop area.

Bishop Cal Fire Battalion Chief Matt Edmiston said everything was under control shortly there after.  CHP was also on the seen to close Highway 395 should the smoke become too heavy, or the fire threaten to cross the highway.

The controlled burn on LADWP land has been canceled for tomorrow.