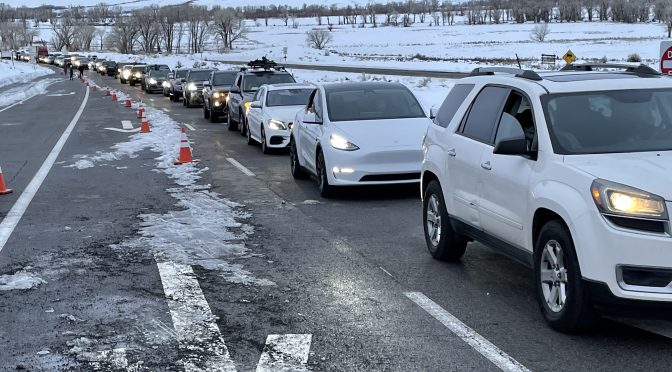 Mammoth Mountain finally received the snow storm it has been waiting for all winter long.. eight to nine feet were dumped in the latest storm.  Highway 395 was closed until late Thursday afternoon, with hundreds waiting hours for the possible chance the road would open.

The highway finally opened around 4:00 p.m., with cars being escorted by CHP in groups of 50, to the hoots and hollers, honking horns, and thumbs up for CHP and Caltrans workers.

At the top of Sherwin Summit, another CHP checkpoint stopped vehicles to inquire about chains. Those without chains were sent back down the hill, on what one official dubbed “The Road of Shame.” Chains were required on Hwy. 203 leading into and around Mammoth.

A Caltrans worker said social media played a huge part of the waiting crowds. Once the road opened, it got out that Mammoth was opened, and everyone headed out for the mountain, from local hotel rooms and from their homes down below.