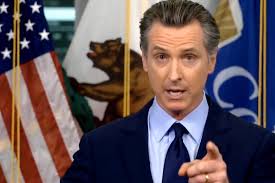 The effort to recall Govenor Gavin Newsom is heating up in Inyo County and around the state.

Last week, the bipartisan signature gathering effort reported they have one million signatures for the recall petition, needing another 500,000 by March 10, to place the issue on the ballot.

State organizers say this effort is nonpartisan “grassroots” and includes supporters of Sen. Bernie Sanders and fans of President Trump.

Recently, Alex from Alex Printing stated in a exclusive KIBS/KBOV interview, that the Govenor has no clue what’s entailed in running a small business.

Actor Scott Baio hosted a live Zoom meeting last week to encourage Californians to sign the petition. Former San Diego Mayor Kevin Faulkner signed the petition over the weekend and is one of the names mentioned as a challenger to Gov. Newsom.

Fox News reported Newsom recently acknowledged the coronavirus vaccine rollout in the state is not proceeding as expeditiously as expected, while confirmed virus cases surge.

Gov. Gray Davis, who was recalled in 2003, was the first governor recalled in the United States since 1921. Davis was replaced by Arnold Schwarzenegger.