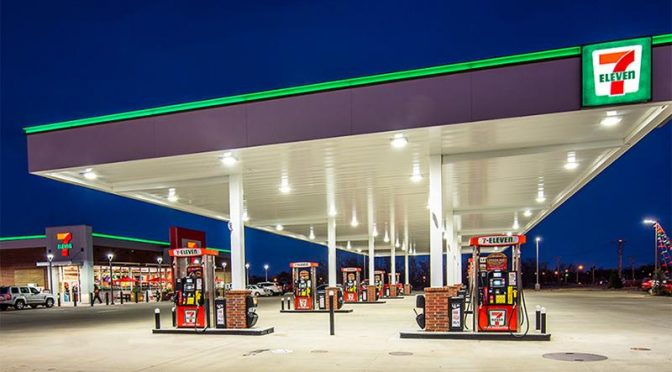 The ARCO gas station and truck wash will be re-branded as a 7-Eleven sometime late next year.

The ARCO station is owned and operated by the Speedway Gas chain,  a division of Marathon Oil, the U.S.’s largest gas station/convenience store chain with over 10,000 locations.

Until 2012, Speedway was a small chain mostly in the Midwest, until purchased by Marathon Oil. Speedway now operates 3,900 stations in 32 states, including a recent insurgence into Southern California in rebranding numerous ARCO and Shell stations.

The Bishop ARCO never got its rebranding to Speedway due to the on-again, off-again, sale negotiations over the last nine months.

In the $21 Billion deal announced last month, 7-Eleven will acquire all 3, 900 locations of Speedway and most ARCO stations. The FTC is requiring Marathon Oil to divest itself of 300 current Speedway/ARCO locations before turing over to 7-Eleven.

Based on other new 7-Eleven projects seen around Southern California, it is expected that the current ARCO facility will be razed and rebuilt.  7-Eleven has several 32-pump “super” convenience store projects in the works.

(Photo: A Super 7-Eleven rebranding of an old Sunoco station in Florida)