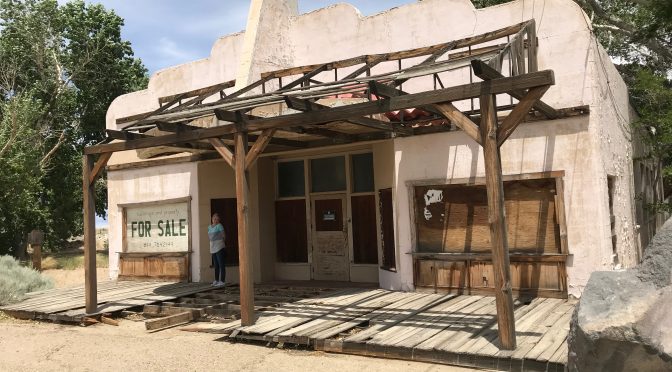 SOME INYO HISTORY . . .  Season 2, Episode 23 of the Twilight Zone was filmed in Olancha, at a now old building, still standing, on the east side of Highway 395. In the 1960 filming it was actually Frank & Ann’s Airflight Cafe. (Changed to Joe’s Airflight Cafe for the show.) 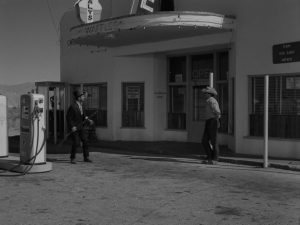 In the episode, “100 Yards Over the Rim” a  pioneer from an 1847  wagon train sets off to find something for his ill son and stumbles into the present-day diner (1960). Cliff Robertson starred, along with Ed Platt (Get Smart), and John Astin (Addams Family) .

The wagon train sequences were filmed out in the Olancha Dunes.

The show aired on CBS on April 7, 1960, followed by another episode, “Rip Van Winkle Caper” filmed in the Alabama Hills. Over the two weeks of filming, to save money, the production company used the same crew and equipment, with two different scripts, directors, and cast of actors.

The cafe was probably named after the air strip nearby behind the now defunct Ranch Motel & Cabins. Reportedly, the motel’s owner knew a lot of Hollywood stars back in the day, and they would fly up to hunt and fish in the Eastern Sierra. It was also allegedly a place “in the middle of nowhere” where a famous person could partake in “activities” and not be seen by the Hollywood media.

The current photo, taken this summer, shows a “For Sale” sign which has since been removed after my first posting on Facebook. The property is not for sale.

Recently I picked up on eBay, a matchbook cover for the AIrflight Cafe. On the inside back  it is labeled as in the town of “Grant” which was the small area consisting of the cafe, an old 76 gas station across the street, and the Rustic, and Ranch motels nearby.